Audio headsets are tricky things to evaluate even with specialized audio testing equipment. No matter what the machines say, it ultimately comes down to the ear of the beholder. We’re eclectic creatures when it comes to experiencing audio. Some folks like treble, some like good mid range, some like ear drum shattering bass, and gamers want accurate positional audio. Speaking to the latter, the Psyko Audio 5.1 Gaming Headset might your next choice. But is it more than just another gaming headset? Let’s find out! 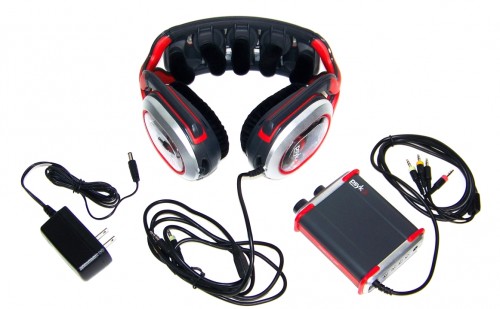 The Psyko team consists of some of the most serious, talented audio engineers ever assembled on a single project and was a product that was two years in the making. Let’s walk through the features of the headset, unbox it, and if we’ve missed anything, we’ll cover it afterwards.

More pictures of this headset can be found in the photo gallery on the last page of the review.

Again, five individual drivers are built in to the head band that sits on your head instead of inside the ear cups. This is part of what makes the Psyko’s Waveguide Technology special and we’ll get into that in a bit. Already mentioned are the pivoting ear cups for comfort. And unlike other surround headsets, the inline 5.1 AMP boosts audio quality and contains no DSP, but provides controllable bass intensity as well as amplified audio control.

As for price, the Psyko Audio 5.1’s ring it at a premium $299 US, but we’ve found them for as low as $239.99 US on Amazon. While there are many cheaper headsets, some with surround as well, we’ll attempt to see if the price is justified.

More on the WaveGuide Technology

In a nutshell, this technology essentially combines the audio frequencies that are traveling down both the front and rear pair of individual channels. This helps separate and produce realistic front and back audio. That realism is intended to give you a better perceived direction of the source of the audio, whether it be music or a video game.

The realism is so accurate that Psyko Audio has done some contract work with racing development teams. Many training facilities have utilized their expertise to train drivers who depend on the sound their race cars make to monitor how they’re running and to spot particular issues before something eliminates them from the race. This in itself is pretty impressive and has us in higher anticipation of what to expect.