A Slim Body with Optical Zoom 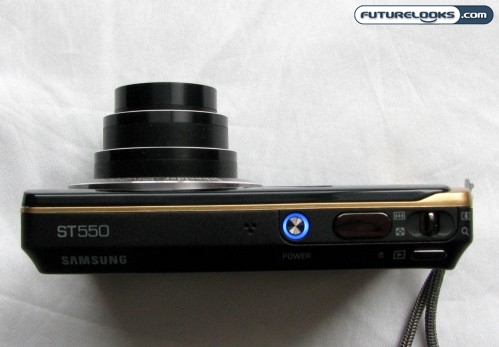 By and large, the vast majority of consumer-level cameras will offer you a 3x optical zoom lens. Despite having a slimmer body than most, the Samsung ST550 is able to bump this up to 4.6x optical zoom. This will certainly come in handy for sporting events and other occasions where you’re a little farther away from the action.

Looking at the top of the camera, you’ll find that there are a total of three buttons, along with the zoom rocker. The power button is located closer to the center (surrounded by a blue light), the two-stage shutter button is next to it, the zoom rocker next to that, and the playback button below that. This layout works well, giving you easy access with your right index finger. 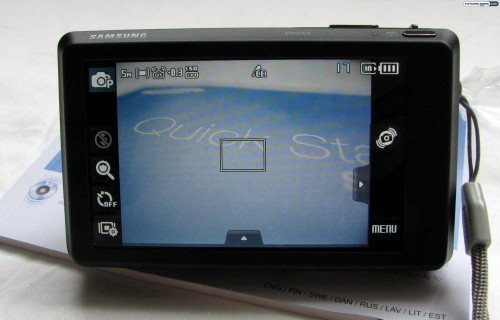 Aside from hitting the shutter button and adjusting the zoom at the top, just about everything else is done through the touchscreen user interface on the back. As expected, the menu system is more robust than that found on the Samsung HMX-U10, but this is a more powerful unit.

It is a wide-aspect display in the back, so if you are taking standard 4:3 aspect photos, the virtual buttons don’t obscure your view whatsoever. Along the left side, you can have quick access to changing the shooting mode, flash, timer, display settings, and so on.

To bring up the more comprehensive menu, you can pull up some of the items with the tab at the bottom of the screen. If you are in Program mode, lets you adjust the ISO, resolution, white balance, EV, and more. By holding what looks like the shaky camera on the right, you can tilt the camera to access three more features. 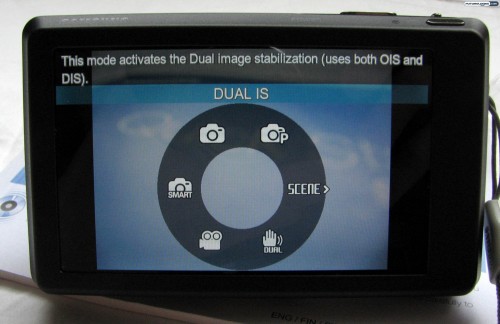 One small feature that I thought was quite useful is that the taps on the touchscreen don’t activate anything until you take your finger off the display.

For instance, when you want to change the shooting mode, you hit the virtual button in the top-left corner and it brings up the virtual scroll wheel shown above. You can then run your finger along this circle and as you “hover” over any of the six items, it will tell you what it is. When you find the one you want, you take your finger off the screen and it is activated.

A common issue that some people have with touchscreen interfaces is that it can sometimes be difficult to know when you’ve actually pressed something. Much like certain Samsung cell phones, the ST550 offers haptic feedback.

You can adjust its strength in the menu, but in a nutshell, this makes the camera vibrate slightly when you press anything on the screen. This can become an unnecessary battery draw, but it can give you a near-tactile like response.

On the downside, especially for Canadian winters, the touchscreen will not work with gloved fingers. This is the same scenario you’d encounter with the capacitive touchscreen on the Apple iPhone.