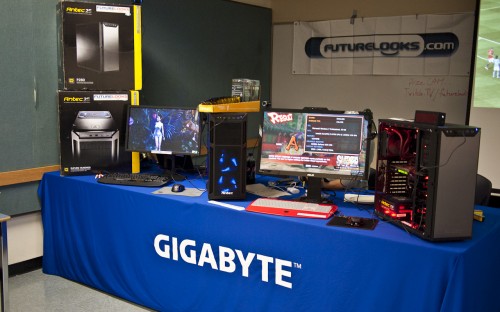 Futurelooks was back at BCIT again this past Friday, October 12th, 2012, to help spread the computer lovin’ cheer at their Fall LAN party event presented by the BCIT Student Association. Yes, the same post secondary education institution for techies that we hit back in September during orientation week. We were also there this past spring for their Spring LAN Event. As you can see, we like these guys and they like us too.

Although we didn’t have much notice about the event, we still wanted to come out and support a really great bunch of students that will probably be developing the next hot game, the next TV series, and maybe even the next piece of life changing hardware!

Futurelooks brought down demo systems so that we could show off some of the latest in computer hardware and provide tips and helpful advice to anyone that wanted them. 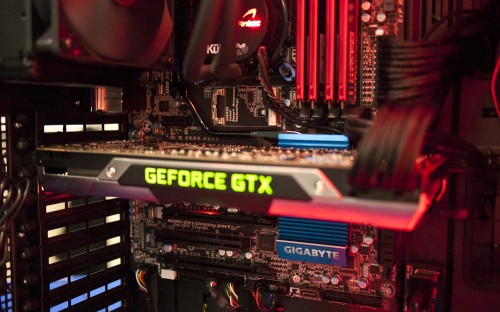 System one was enclosed in the ANTEC P280 was outfitted with a Core i7 3770K processor attached to a GIGABYTE GA-Z77X-UD5H motherboard and cooled by ANTEC’s H20 920 liquid cooling system. We were running a special edition Kingston HyperX Red 16GB DDR3 1600MHz memory kit and a 240GB Kingston HyperX 3K SSD.  Finishing things off was the ultimate GPU on the market today, the NVIDIA GEFORCE GTX 690. Putting power down was one of ANTEC’s HCP 850W power supplies and we decorated the system with some RED LED lighting also from ANTEC. 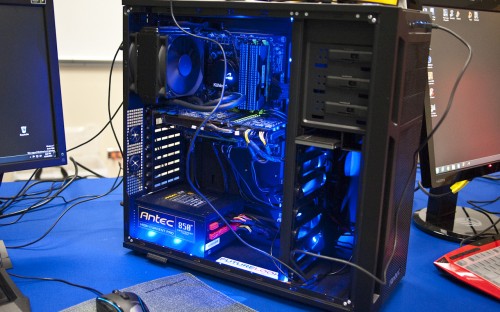 System two hadn’t seen much action since LANcouver 2012 so we decided to bring it along to show students at the event just how easy it was to put together something that could still game but was a little easier on the pocket book. Inside we attached a Core i7 3770K processor to GIGABYTE’s G1.Killer Sniper M3 which is an mATX sized motherboard. We also tapped GIGABYTE for a more modest GPU in the GTX 570 SuperOverclock edition. Also in the system was Kingston’s latest HyperX Predator DDR3 modules in a 16GB 1866MHz capacity and topped it off with a Kingston HyperX 3K 240GB SSD. The CPU cooler was the H20 920, power supply was the HCP 850Watt, and the case was the Eleven Hundred, all provided by ANTEC.

Both of them were attached to NVDIA 3D Vision 2 systems with monitors provided by ASUS and BenQ. 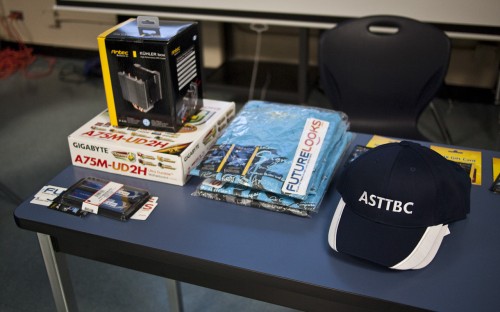 A LAN Party just wouldn’t be a LAN Party without prizes. So Futurelooks tapped our greatest allies in the proliferation of PC DIY for some decent things to give away. In addition to all the free giveaway stuff provided by GIGABYTE and ANTEC which included mouse pads, pens, screen wipes, T-shirts and more, we also provided the event a GIGABYTE A75M-UD2H motherboard, a Kingston HyperX Blue 1600MHz 8GB DDR3 Memory kit, and many limited edition Futurelooks.com bumper stickers.

William from ANTEC, who made it out specifically to support the event, gave away a lot of T-shirts, screen wipes, and other cool things that he had. He also submitted a Kuhler series air cooler to the event for a general draw prize. Given the week’s notice that we had, it was quite a mad dash to gather up enough freebies to take care of the event but we definitely came through with almost something for everyone at the last minute. 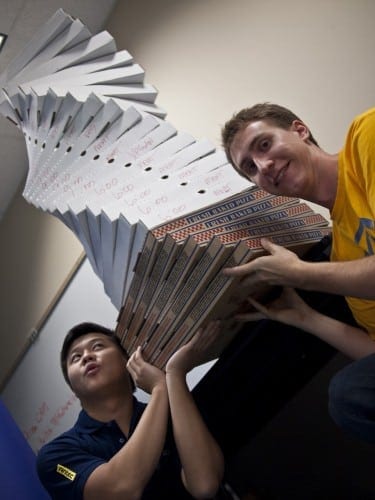 And what LAN party would be complete without copious amounts of pop and of course, PIZZA! There was also a selection of appetizers including spring rolls, meat balls, chicken wings and other fried things that made gamers happy.

Another Successful Event for the Futurelooks Road Show 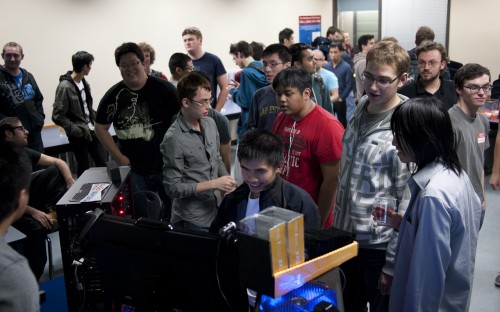 The evening concluded with prizes for the Counter Strike, League of Legends and Starcraft II events and then the giving away of the aforementioned draw prizes. William from ANTEC and I also enjoyed whipping T-shirts, mouse pads, and anything else we had left at the happy gamers that stuck around on Friday night with us. It seemed like everyone was well fed, had a great time, and was looking forward to the next event. If you were tuned in to our Twitch.TV Channel, you’d be able to see that because we were streaming the whole time.

Making the Futurelooks Road Show possible was of course the sponsors that helped provided the prizes and the hardware for our demo systems which included GIGABYTE, Kingston Technology, ANTEC and NVIDIA. Without their support of grass roots events like these in Canada, they seriously just wouldn’t be as fun or awesome as they were this evening. We hope to keep dragging them to some of the coolest events in Western Canada, and maybe Eastern Canada too in 2013.

If you have an upcoming event in Western Canada that you’d like the Futurelooks Road Show to head out to, give us a buzz and we’ll see what we can do. See you at the next event!