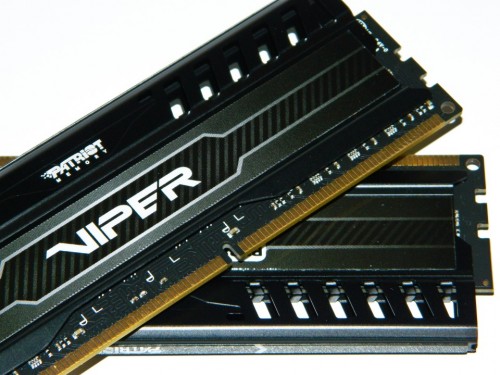 Patriot Memory is one of the staple memory providers in today’s computing market. While they offer flash, SSDs, storage enclosures and even media players, their memory is the foundation of the company. Like most memory companies, they make changes to that product category to support each new processor generation.

Recently, Patriot announced their new Viper III memory line at Computex 2012 in support of Ivy Bridge processors and Z77 motherboards. The latest series is XMP capable and will come with new color choices including red, green, blue and black. Normally, the color changes are just color changes, but Patriot has made additional tweaks to specifications for each color, giving them more than just pretty heatsinks. Since Intel Ivy Bridge has proven hot in operation, you’ll need some good quality memory just to keep up. Let’s see what the new Viper III 2133MHz DDR3 dual channel memory kit can do!

When a new Intel processor launches, it may seem like it’s simply to boost memory sales. Although true in some respects, it’s also because the integrated memory controller (IMC) changes from architecture to architecture and it’s necessary to test for best possible compatibility, leading to changes to design if necessary. For example, Gulftown, Nehalem, Lynnfield, Sandy Bridge and Ivy Bridge have IMCs that each require different SPD programming to run perfectly. Ivy Bridge is no exception and the Viper III from Patriot are tuned for that processor

As mentioned, the new Viper III kits will come in different colors that signify specific tweaks and features that are unique to each series. Here’s a quick break down. 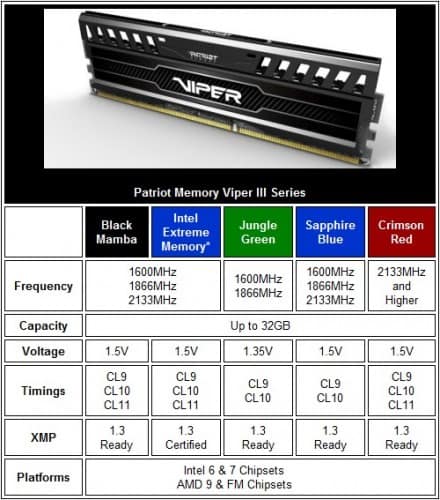 Most of the frequencies are similar across the four kits with the exception of the Jungle Green memory which operates with a mere 1.35Volts. Low voltage memory means selecting very specific memory ICs capable of low consumption but not very high overclocked frequencies. The Crimson will sport the highest frequencies at launch and will be your choice for those major overclocks. Blue comes in Sapphire and IEM (Intel Extreme Masters) themes with similar specs. 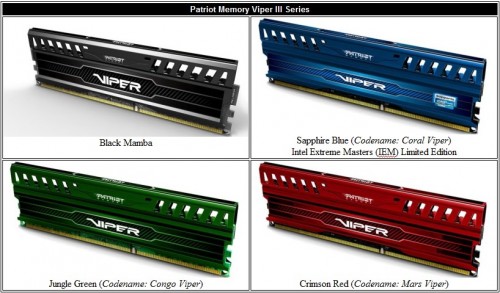 OK, those aren’t their real “codenames” but I’m an enthusiast and love an elite name worthy of the pending potential so I had a little fun giving them. You’re not going to find them anywhere else but here so don’t go walking into a store and asking for “Congo Viper” green modules at the store.

The IEM is the only set that is specifically XMP certified. The rest do not have this certification, but they are capable. However, we didn’t have any issues applying XMP profiles in testing. It’ll remain to be seen at how well these modules support the new AMD AMP memory profiles when boards that support them start hitting the streets.

Retail price for our Viper III Black Mamba DDR3 2133MHz Dual Channel Kit as tested will cost roughly $59.99 US at most major retailers. Overall, that isn’t out of the ballpark of most memory modules in this quality range. 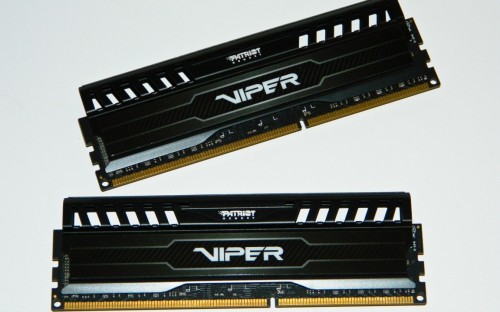 Compared to the Division IV, the Viper III take a step in a new design direction. An enthusiast named Josh from NFC Systems, known for custom contemporary modded systems, was one of  the driving forces of the new heat sink design. It’s cool to see that Patriot Memory still values the enthusiast spirit. The Viper III heat spreaders are actually very light compared to the Viper Extreme (Division IV) due to the extensively scultped shape. Even though they match in size, the Viper III are and almost half the weight of the Viper Extreme. If you know something about thermal dynamics, then you know these spreaders will still get the job done.

During the first part of the launch, all the modules up to 2133 MHz currently use Hynix RAM modules. Later on down the line some Micron or Samsung ICs may be used depending on the frequencies and specs of the kits. However, it was during testing that we discovered there was a very good reason to use Hynix. Both the fab and Patriot’s engineers have found some extra memory bandwidth between these specific ICs and the Ivy Bridge memory controller. DIY enthusiasts appreciate the higher frequency RAM because it can often be down clocked to support the CPU better by not overclocking. We’ll explain more shortly.

The Viper III will be tested against different memory kits using the stock timings and overclocked frequencies. Keep in mind that these attributes were manually set in the motherboard BIOS. The goal is to compare memory module quality despite their operating defaults.

Let’s get right into testing!