Lower memory timings increase memory bandwidth which increases system responsiveness. For example, games that need more than 1.5GB of memory benefit execution more than anything else. Keep in mind that the processor’s IMC is the primary constant that effects memory performane. Here are the memory test results. 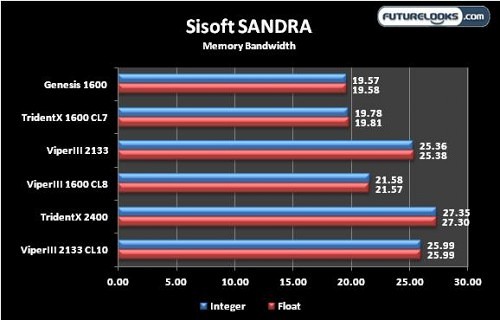 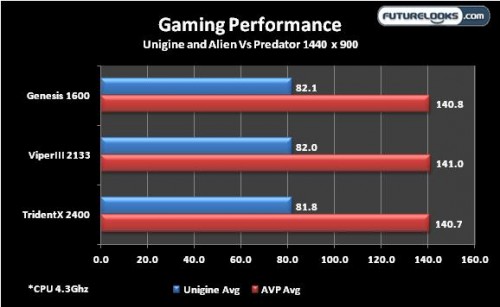 When it comes to gaming, it’s all about the GPU, and in some circumstances, CPU performance. Budget 1600MHz kits are more than enough but don’t always look as good as the high performance flag ship kits. 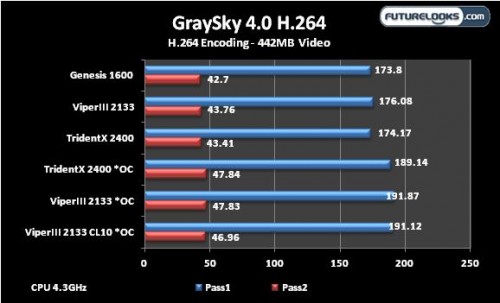 After repeated trials, these were the average encoded frames per second using the GraySky 4.0 benchmark. The reason for the scores being so similar between 2133 and 2400MHz is that the Ivy Bridge CPU isn’t capable of utilizing all that memory bandwidth. Even with an overclocked CPU, it’s the same story. 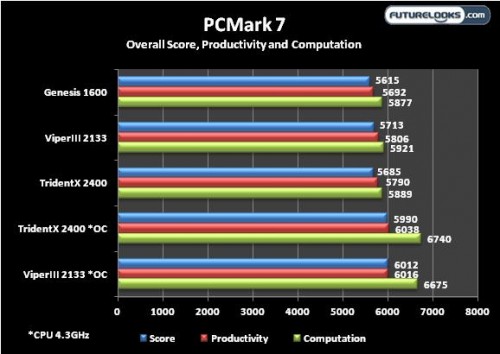 At this point, the test system is running so optimally that there’s only slight changes in performance. Interestingly, the results are very close again as there is more than enough memory bandwidth feeding the CPU. When overclocked, the TridentX 2400MHz shows the advantage of extra bandwidth. 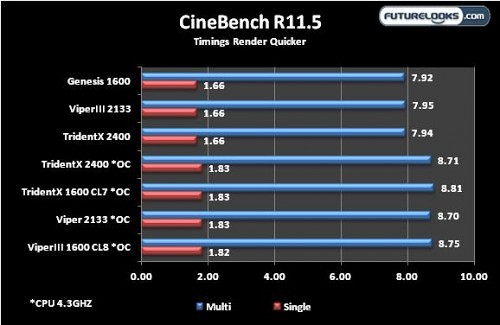 Even with and without the extra memory frequency, the system performance is very close. These slight variations point to the finest tuning between the BIOS and memory. When over clocked, the CPU is still unable to utilize all that bandwidth. Still, this gives you an idea as to what memory frequencies realistically support the system for the best cost. 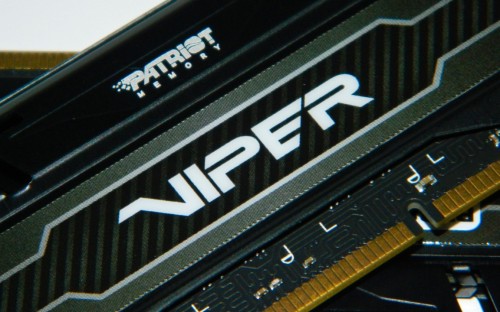 Until the Viper III arrived, the TridentX 2400MHz didn’t have a challenger. But it’s clear that the Viper III’s additional tuning and careful selection of Hynix memory chip would better support Ivy Bridge’s 1600MHz IMC. Whether at CL8 or CL9 timings, it’s currently faster than the many kits that we currently have in the labs.

The Patriot Memory Viper III 2133MHz 8GB memory kit is perfect at stock speeds and surprisingly fast when down clocked to 1600MHz and with latencies tightened. This will satisfy users who demand maximum system responsiveness. The ability to work with tighter timings is one of the greatest benefits hidden within high performance overclocking memory. Any Ivy Bridge processor will get maximum bandwidth at all times as a result of this combination of tuning. Although the high CL11 timings at higher speeds may deter some looking for even higher speeds when pushed.

So in the end, the Patriot Memory Viper III 2133MHz DDR3 dual channel kit offers the ability to clock to new heights, but can also run at tighter timings to give your Ivy Bridge system more responsiveness. Patriot has taken the time to select the right parts for Intel’s new processor and that shows in the results. It’s clear that these aren’t just rebadged/remarketed modules. They are the real deal and at about $59.99 US/CA , they also won’t overtax your wallet.  They receive a very strong recommendation from us.