First We Plug in the Main Components 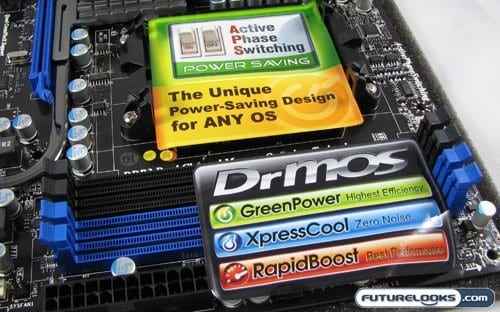 Like many other AMD 790FX based AM3 boards, the CPU socket on the MSI 790FX-GD70 motherboard is fairly close to the memory slots. Though the stock AMD cooler we have on hand fit just fine in the socket, some larger CPU coolers might have some issues fitting over RAM with overtly large heatsinks. Otherwise the space around the CPU socket is quite open, and you could install any number of aftermarket CPU coolers without issue. 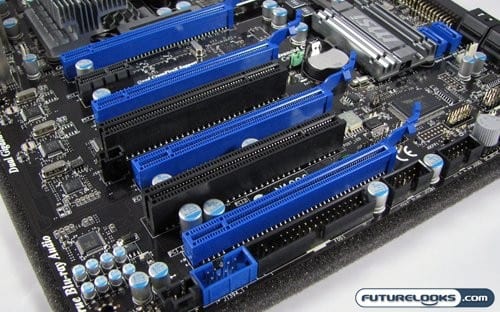 When you take a look at the expansion slots on the MSI board, you’ll notice that you could quite nearly install four dual-slot video cards for full CrossFireX support. MSI does take advantage of all 7 expansion slots found in the ATX standard, but that last card would have its exhaust fan blocked by the rear of the case. If you’re looking to build a more modest rig, there’s definitely more than enough room for additional components that aren’t video related. Though a dual slot video card would block the only x1 PCIe slot, each of the x16 PCIe slots are backwards compatible. There’s also a couple PCI slots thrown in for flavour.

The headers on the lower edge of the motherboard a little more difficult to praise. These connectors typically have header cables from the front of a case plugged into them. The USB headers are fine, but the position of the FireWire and Front Panel Audio headers are increasingly awkward. If you still use a floppy drive, you might need to venture out and get a long floppy cable to compensate for the position of the floppy connector. It’s nowhere near the front where it should be. 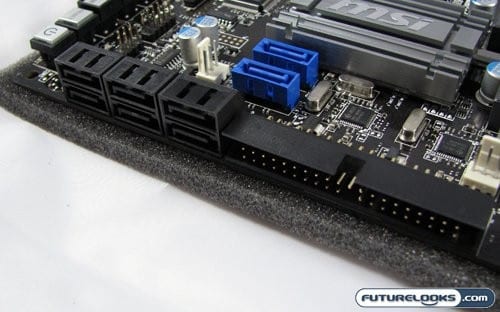 While I have some issues with the headers, I found that the IDE and SATA ports were oriented in a more favourable fashion. Having the ports at a right angle instead of straight up gets cables out of the way and makes cable management that much easier. The black right angled ports are controlled by the AMD SB750 Southbridge, as is the IDE port. The SATA ports support the major RAID modes. As for the two blue ports that are sticking up from the board, they are with the eSATA ports on the back and are controlled by a JMicron JMB322 controller. This chip provides separate RAID functionality for any drives plugged into these ports. 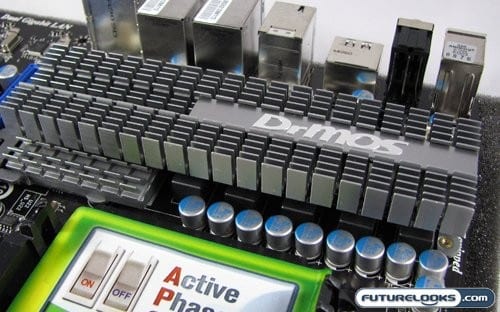 To keep supporting components cool, MSI installed a rather large passive heatsink on the MOSFETs next to the CPU. They also repositioned the Northbridge chipset to be able to take advantage of the cooling properties of this heatsink. Dubbed DrMOS, this all in one system provides cooling for the power management components of the board. This is supposed to reduce heat and power spikes, making overclocking and stock operation a much smoother affair. Whether that helps remains to be seen.