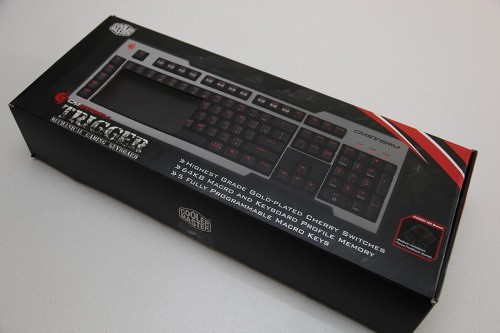 CoolerMaster’s CM Storm division has been cooking up some awesome products over the last year. Taking a look at the product line shows a company that is focusing on a select range of very different products, each tuned to a particular gamer’s habits and requirements. But unlike other manufacturers, CM Storm hasn’t diversified the line to the point where one product is only slightly different from the next. Today we’re looking at their flagship keyboard for gamers called the CM Storm Trigger.

Does it live up to its promises? And will it stand tall among the many gaming keyboards available out there? We discovered a few neat features unique to the Trigger that might get you excited. 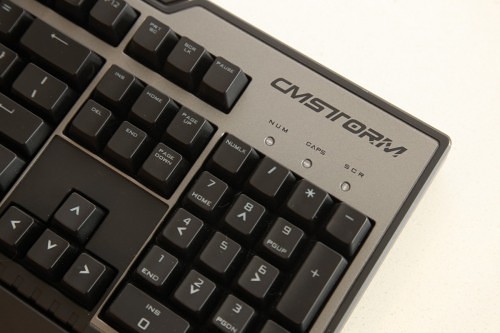 At this year’s 2012 International CES we got a sneak peak at new CM Storm products coming out this year and the Trigger, their top-of-the-line gaming keyboard, was one of them. The Trigger is positioned above two other keyboards (the Quick Fire Pro – full size with no frills, and the Quick Fire Rapid – my favorite because of its small LAN-friendly “tenkeyless” design) and is priced at a MSRP of $120.

The Trigger is a full-size product, but forgoes the multitude of extra buttons provided by its competitors – media and illumination keys are integrated with the F-keys. These design choices result in a feature packed keyboard that’s also not going to hog your desktop space. This is important when in the confines of a tight LAN event as well.

Most keyboards with USB hubs are restricted to low-power devices like mice and card readers, but the Trigger has a 5-volt auxiliary plug so that you can turn it in to a powered hub for cell phone charging, external 2.5” hard drives and more. It would have been nice to have seen an included inline power connector at the PC end of the USB cable since adding yet another wire to our desks is something most of us don’t want to do.

The biggest feature of this keyboard of course is the fact that it is mechanical in nature. 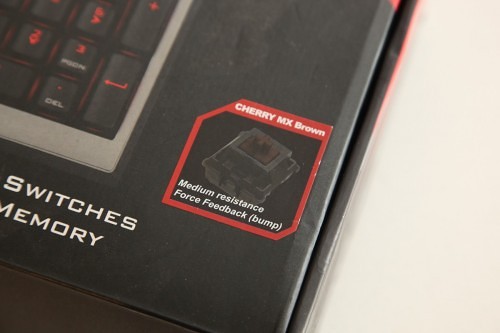 Almost every notable gaming keyboard out there uses Cherry switches. (CM Storm and some retailers have oddly indicated that different key types will be available based on the region and store, so make sure you check the box or description before you buy one.) This particular CM Storm Trigger uses Cherry MX Brown switches, which register the key stroke without a harsh “click” after about 2mm. They don’t require a lot of force – quick, frantic key presses during gaming will get registered – and are comfortable when gaming.

Compared to my Logitech G15 (which doesn’t use mechanical switches) you’ll find less resistance and a better overall feeling. Other Cherry switches include MX Black (virtually undetectable “bump” when being pressed), MX Blue (tactile, discernable “click” when pressed) and variations between those (such as Clear and Red – the latter of which is reputed to give less than stellar typing performance but excels in gaming situations). 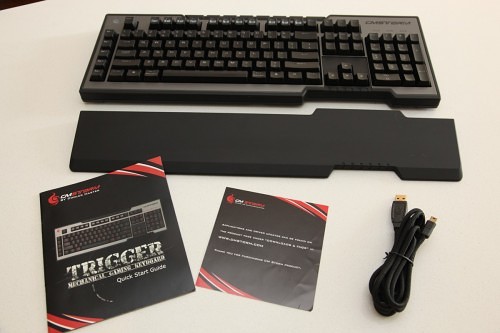 The keyboard comes well packaged and includes a generously sized palm rest, detachable mini-USB cable, and instructions but no driver disc – it’s always better to download the latest software, and an included note from CM instructs you to do so. Being able to detach the cable does help with transport, and reduces the strain that a backpack could put on a permanently attached cable. Even though mini-USB cables are easy to replace if lost, I would have rather seen a proprietary locking cable design since mini-USB jacks tend to get loose with time. A loose cable isn’t something you want when you’re in the middle of an intense gaming session.

Unfortunately the aforementioned 5V USB adapter is indeed not included. But even worse, it isn’t even available from CoolerMaster, leaving you on your own to find this part if you want to take advantage of the powered USB feature.

Time to get jacked in 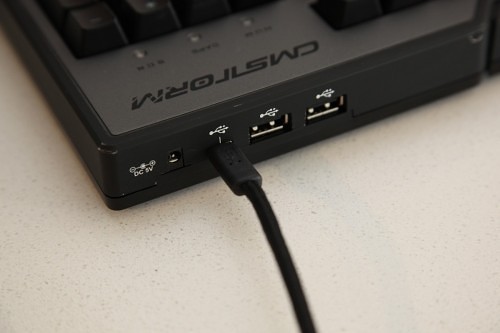 Setup is easy – plug and play on Windows 7 worked just fine, and the USB hub (two ports are included on board) worked with my CM Storm Sentinel, but not my USB headset – this is where you would really want that 5-volt boost. The software was quick to install and quick to set up. The keyboard performs well without applications installed, and even stores your macros internally so you can use another PC and retain your key settings. This is a feature I have really enjoyed on my Sentinel Advance mouse. In fact, I’ve reformatted a few times and never had to install the software again. Once you get the settings you like, you may never have to touch the software again except to re-program macros for a new game.

The level of configuration possible with the software is astonishing. You can assign almost every key to a specific function – from macros to program launching – and this includes letters, numbers, Windows key, CTRL, ALT, the numpad and the five included macro keys. I immediately programmed a key for the Windows Calculator app, something I have a habit of using a lot on my PC. CM Storm features internal profile storage on a lot of their gaming peripherals, and I’m a huge fan of that – no more worrying about lost settings after a reformat.