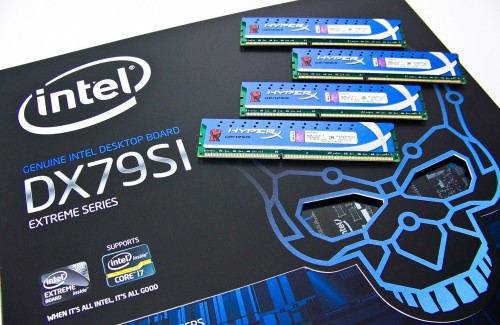 It’s the “Year of the Tock” when Intel launches a revision of their latest processor architecture which is named Sandy Bridge. Instead of an all new name, it’s simply being called Sandy Bridge-E. The most obvious changes visible to the consumer eye is the addition of a fourth integrated memory channel, new supporting X79 Chipset and higher pin count LGA2011 socket. Naturally, this means you’ll need a new X79 motherboard to support Sandy Bridge-E in addition to a new processor. But does that mean you’re also going to need a whole new CPU cooler or all new specific quad channel memory too? All very good questions we’d like to answer for you as well as uncovering any extra benefits that this new platform has in store for us.

Another chip? Again? There are a lot of folks who have been trying to catch up with Intel’s processor genealogy as of late. There are plenty of online resources but it can be a little difficult for work weary consumers to digest. Have a look at the summarized comparison table below. 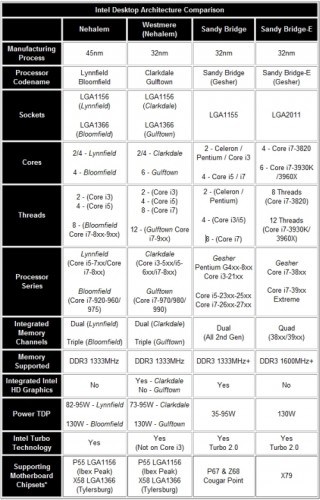 Hopefully, this clears up the LGA1156 and LGA1366 Core series processor confusion given they shared similar model names and chipsets. While most LGA1156 products are long gone, the LGA1366 processors are starting to thin out as LGA2011 Sandy Bridge-E processors take over the hex-core performance desktop market. However, the LGA1155 Sandy Bridge processors and supporting motherboards will be around well in to next year. As prices drop, it’ll still be the top choice for gaming systems. 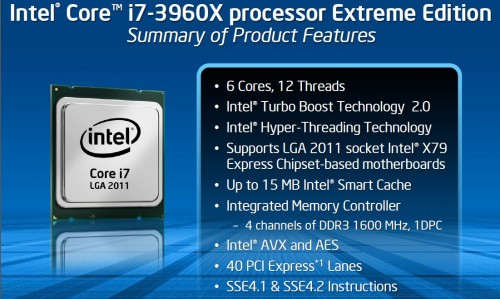 Sandy Bridge-E (SB-E) is the latest processor design to use the 32nm architecture before we switch to 22nm Ivy Bridge. The processor offers many of the same integrated features as regular Sandy with a few enhancements which include a slightly more aggressive Intel Turbo Boost 2.0, Intel AVX (advanced vectoring) and AES, greater multi-threaded tasking and overclocking. However, SB-E does not have Intel HD integrated graphics meaning no Intel Quick Sync to speed up video encoding type tasks.

Sandy Bridge-E can access four memory channels at once compared to Sandy Bridge’s dual memory channels. SB-E can utilize up to 64GB 1600MHz DDR3 while SB supports up to 32GB 1333MHz. That means there is an increased amount of memory bandwidth readily available. That’s the main reason why the SB-E processor pins had to be increased requiring a new socket. 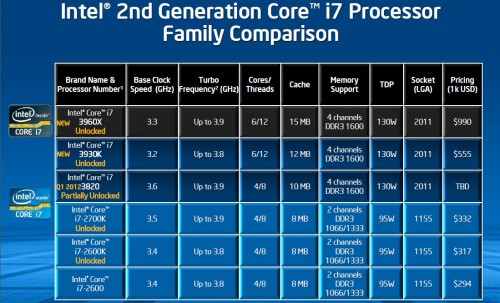 The Core i7-3960X we have here is in fact an extreme series processor aimed at the high performance computing and content creator market. Both the 3930K and 3960X processors enjoy the more aggressive 600MHz Turbo 2.0 feature even if it only scales on 1 to 2 cores. That’s all most programs need anyways. The Cache sizes will really help improve the K and X processors’ 12 thread performance especially with more data intensive tasks like transcoding. And, you can bet that even the 3820 processor will provide a noticeable performance increase over the 2600K due to the cache and memory frequency increase.

The X79 chipset supports four memory channels compared to X58’s three channels and Z68’s dual channels. X79 offers four more PCIE 3.0 lanes which means no current risk of bandwidth limitations at 40GB/s total. Intel Z68 only had 16 lanes which required the use of PLX chips to remedy the limitation which is a trend started by ASUS. USB 3.0 is still not native to Intel chipsets and requires third party controllers. If you need more than two native SATA3 (6Gb/s) ports, it’s up to board partners to use third party controllers as well.

The new Sandy Bridge-E X79 motherboards sport a new socket and retention system. The hole patterns are the same as the LGA1366 boards. However, most X79 boards require removal of the retention plates. As long as your CPU cooler has a good back plate that works, it’s not a big deal. I would not recommend installing any cooler without the proper back plates. Some users will probably have to order an adapter kit. At least we don’t have to buy a new premium CPU cooler. Noctua and Prolimatech customers just have to contact them to get free adapter mounting kits. Cooler Master and Thermaltake have also stepped forward to support the LGA2011 migration on select coolers in their line ups.

SSD caching is not present which is surprising given the feature would absolutely benefit content creators. This is actually good news for OCZ who offers the Synapse Cache SSD specially designed for motherboards without SSD caching. More on that later as we complete our testing of this innovative new product.

A curious Intel X79 feature mentioned in a few spec sheets is the use of an International Rectifier built Digital PWM. Its purpose is to protect the CPU and each memory bank from over voltage as well as limit voltage drops. The VR12.0 spec is currently being validated for upcoming Ivy Bridge 22nm processors. Will future Ivy Bridge work on this board? Only time will tell!