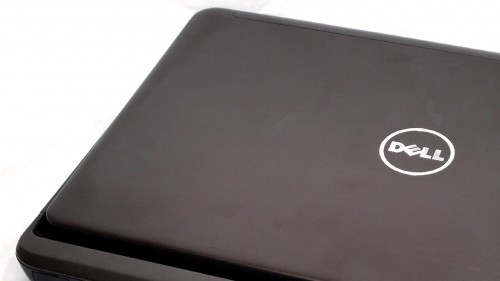 Dell has always been a pretty consistent name when it comes to the consumer computing end of the spectrum. They may not necessarily have the most powerful machines or the sexiest products, but they’ve done a good job at keeping the prices reasonable while still offering you a decent package. And that same fundamental philosophy is continuing with the Dell Inspiron 14z. It’s a step above the most entry-level range of laptops, giving you a “thin and light” laptop that’s still “packed with power.” 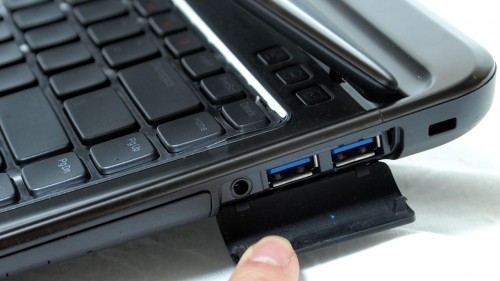 As can be expected with just about every other Dell laptop, the Inspiron 14z comes in a huge variety of configurations. For the purposes of this review, we were provided with a unit that runs somewhere in the middle of the model’s spectrum, if not leaning toward the slightly higher end.

You can spec down to a Core i3 or reduce the amount of RAM to save some cash, should you choose, but the chassis remains the same. You still get a webcam, USB 3.0 ports, a dual-layer DVD+/-R optical drive, and so on. The standard six-cell battery is rated at 65 WHr.

You may have caught my Dell unboxing video a short while back, but in case you missed it, I have embedded the video above for your viewing pleasure.

There’s not much that’s exciting about the box and contents. In addition to the notebook PC itself, you get the power supply and power cable. The video might be useful, though, for you to get a better sense of dimensions, layout, and feature arrangement. 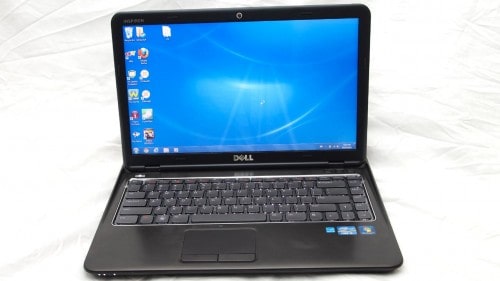 The Dell Inspiron 14z is pretty much what you would expect from a Dell laptop at this price range. It’s a step up from the cheapest of the entry-level notebooks, but there’s no way that it’s going to compete with anything in the slightly higher range.

The build quality is, to put it nicely, sufficient at best. Dell has marketed the Inspiron 14z as “slim and light,” but it’s probably not as skinny or as lightweight as you may have hoped. One thing that I did notice was that the chassis felt too flimsy. The upper lid (with the screen) could easily be flexed, for example.

The other thing that hit me immediately was the “junk in the trunk” look. Behind the screen is a significant “bump” from the lower portion of the notebook. This is quite unsightly, to be honest, and takes away from what would have otherwise been reasonably clean lines. All that said, I did like the metallic finish and the overall attractiveness of this low to mid-tier notebook. 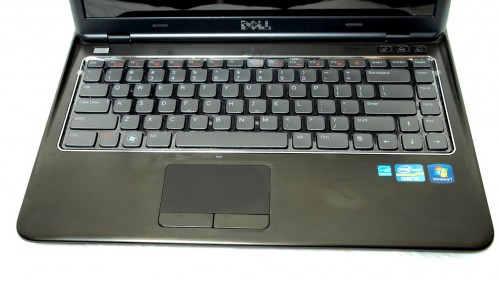 As is the fashion these days, the Inspiron 14z makes use of a “chiclet” keyboard, which is sometimes also called an island keyboard. Much like the Samsung Series 9, this keyboard offers just right amount of key travel (in the context of a laptop) and the layout works quite well. I am pleased to see both the left and right shift keys are full sized; the smaller shift keys have always been a pet peeve of mine.

I can’t say that I’m quite as happy with the trackpad, though. While the trackpad itself is reasonably responsive and you can use it for certain multi-touch gestures like scrolling, the two mouse buttons underneath are far too stiff. You have to press pretty hard, which is why I found myself tapping the trackpad rather than using these buttons. I prefer the mouse buttons to have the same kind of clicking travel as keyboard keys.

As an aside, you’ll also notice that the metallic palm rest areas pick up fingerprints and palm prints very easily. You’ll want to keep a cleaning cloth on hand to wipe that down, as well as the lid of the laptop itself. 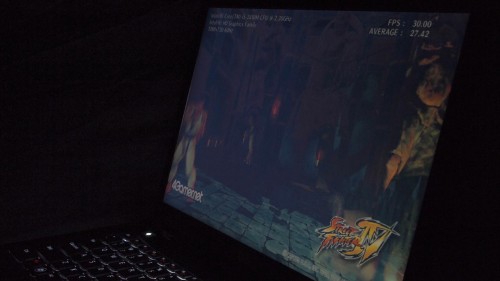 For the most part, you use a notebook PC looking straight onto the screen. That makes sense. However, it’s still a pain when the viewing angles on said screen offer a very narrow “sweet spot” for visibility. Unfortunately, that seems to be the case with the Inspiron 14z.

I understand that a laptop isn’t going to have 178-degree viewing, but with as little as a 30-degree deviation from straight-on viewing, I experienced significant loss in quality and “washing out” of the image on the screen. You can see that in the image above, taken during the Street Fighter IV benchmark (which I’ll get to in a moment). This can prove very frustrating when you have a “hey check this out” moment with your nearby friends.

Similarly, the vertical viewing angle on the 14-inch display left something to be desired. The same kind of “washing out” was experienced at the same minor deviations from a “straight on” viewing angle. The now standard 1366×768 resolution isn’t the best either; my four-year old Inspiron 640m had 1440×900 and it was similarly $600 (or so) at the time.