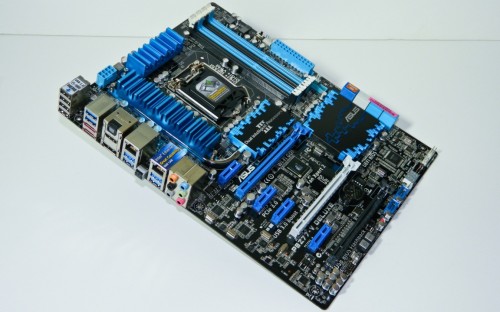 If you recall our highly detailed ASUS Z77 Preview, there are many new user experience and component innovations inside. The P8Z77-V Deluxe was the flag ship solution but a Premium model was recently announced. That brings the “channel series” count to eleven offering varying levels of connective features. Like all the channel boards, the Deluxe offers all of the best ASUS only features (MemOK!, TPU overclocking, EPU efficiency, Q-Design, AI Suite II and Solid State Caps) as well as new SMART DIGI+ which includes multiple digital voltage controllers that tune the CPU, iGPU and DRAM. A total of 20 Phases (16 CPU + 4 iGPU) power the processor along with 2 Phase DRAM since ASUS designed their own unique individual traces and controllers for the memory.

Some innovative user features include Fan Xpert 2 which includes a graphical user interface for controlling system fans in the OS and USB 3.0 Boost with full UASP multi-queue transmission to boost IO transfer speeds (make sure your USB 3.0 has proper UASP support like the Thermaltake 5G). A pile of updates are added to all the tools inside ASUS AI Suite II such as USB BIOS Flashback which allows you to update the BIOS without being powered on, USB Charger+ offers the most power for recharging portable devices all the way up to laptops and an online ASUS enthusiast eco system similar to ROG that allows users to share their overclocking profiles. Finally!

The Deluxe also offers a full range of network connectivity not available anywhere else. Users get dual Gigabit LAN ports, BlueTooth and dual band Wi-Fi. The bonus to the Wi-Fi is that it can allow the system to act like an access point, or router. A new Network iControl utility gives the system user more control over the programs that use the network.

In terms of design, the Deluxe is logically laid out with ports and headers mounted along the edges except for a single fan port near the top PCIEx1 slot. The Wi-Fi module doesn’t come attached but users can easily install it in about 60 seconds. 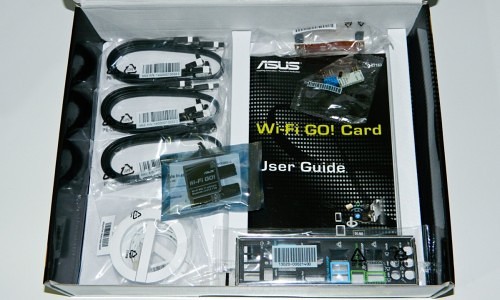 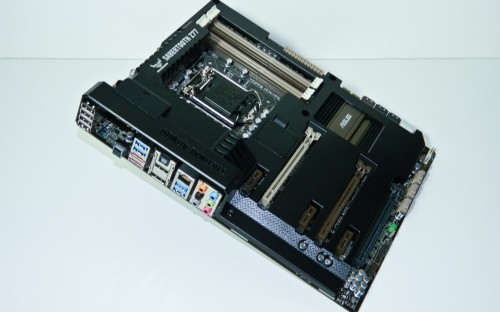 The Sabertooth Z77 motherboard presents an orderly, highly reliable and somewhat militant design due to its Thermal Armor and choice of unusually highly resilient, military-spec components. The TUF Mil-Spec standard components are meant to operate in any environment. Vents have been added to the Thermal Armor as well as two small cooling fans to keep air moving.

The Sabertooth Z77 has an extremely logical layout. The Thermal Armor doesn’t cover any headers which are all visible around the outer perimeter including the horizontal USB 3.0 header. The board also includes protective TUF Dust Defender caps for all the onboard headers, PCIE and RAM slots. Aside from keeping dust out, it stream lines the board’s look. The RAM slot Defender also doubles as a PCIE slot unlocker. Given the average system upgrade schedule, the Sabertooth should still be running programs and games relatively well assuming you upgraded your video cards at some point. The Sabertooth is just plain cool! 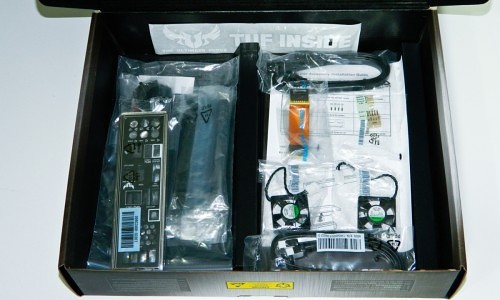 The accessories bundle includes lots of detailed documentation, six black SATA cables, flexible SLI/CFX VGA bridge, two 30mm optional fans, TUF Dust Defender Caps, Quick Connector headers and black IO shield. The board retails for $239.99 US but is the only board in this round up to include a five year warranty. 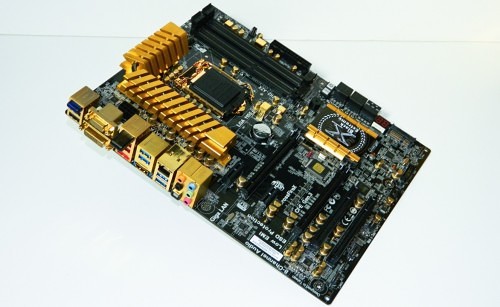 The ECS Z77H2-A2X Gold Extreme board has a theme that has garnered the most attention from the five models in ECS’ Z77 arsenal. The best comment that I’ve heard, thus far, is that it’s a cross between the movie Stargate and Jersey Shore. It’s definitely a product that has inspired some reactions in the social media sphere.

ECS markets this platform with their new Nonstop Super Marathon 3X (72 Hour) Stability, Sahara Severe 50C Test, Apache Long-Life 100% Solid State Capacitors and Thor Ultra ESD (electro-static discharge) Protection. We consider 72 hours testing the basic requirement to validate a board. Intel tests their own boards while in ovens of sorts upwards of 60C so 50C should be the minimum by military standards.

The Z77H2-AX2 offers all the basic Intel Z77 chipset features which includes 2-way NVIDIA SLI and AMD CrossFireX support, eZ Charger for USB port device charging, mini-PCI Express slot (for m-Wireless, m-Tuner or m-SATA devices), Intel SSD Caching, Intel USB 3.0 Turbo and Smart Connect Technology. The board uses both Intel and ASMedia SATA3 support. This is one of the few boards with both Atheros AR3011 Bluetooth and Atheros AR9271Wi-Fi LAN.

Looking over the design and layout, all of the headers and onboard ports are positioned on the outer edges. The integrated Atheros Bluetooth/Wi-Fi share the controller which means with both features connected the bandwidth has to be shared. Also, the Wi-Fi will have limited range which could limit bandwidth and signal depending on the distance of the access point. 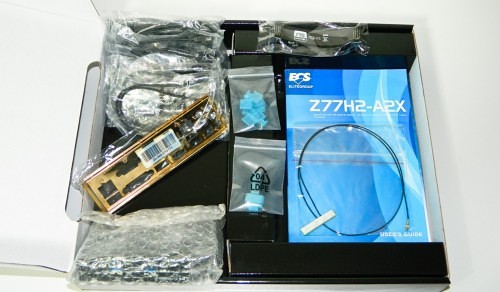 The Gold Extreme comes with documentation, software disc, blue port/header cover caps, black SATA cables, 3.5″ bay USB 3.0 expansion dock with PCI adapter, flexible SLI/CFX VGA bridge, IR antenna and matching gold IO shield. All this “bling” will set you back about $249.99 US. It also has the weirdest warranty: 2 years parts and labor and 3 years parts. So who’s soldering in the third year?