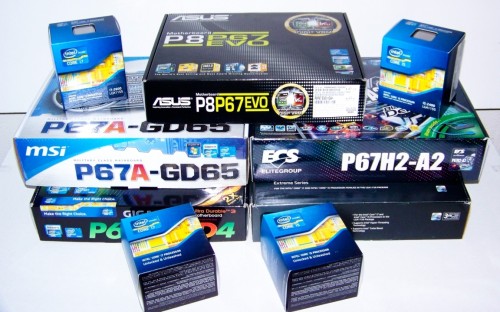 With INTEL’s Cougar Point P67/H67 Chipset issue out of the way, people can now decide which board to get again. Today, we have a nice mix of mainstream Sandy Bridge boards and I’m happy to report that for the most part, they have been a pleasure to work with over the last few weeks. In this round up, we’re testing several of the best price/performance P67 motherboards. We’re giving them a very thorough and scrutinized beating so that you know what to expect and help you decide what to choose when you make the switch.

The challengers waiting along the ropes are the ASUS P8P67 EVO, ECS P67H2-A2, GIGABYTE GA-P67A-UD4, Intel DP67DG Barrage Extreme and MSI P67A-GD65 motherboards. Many of these boards have very similar features. 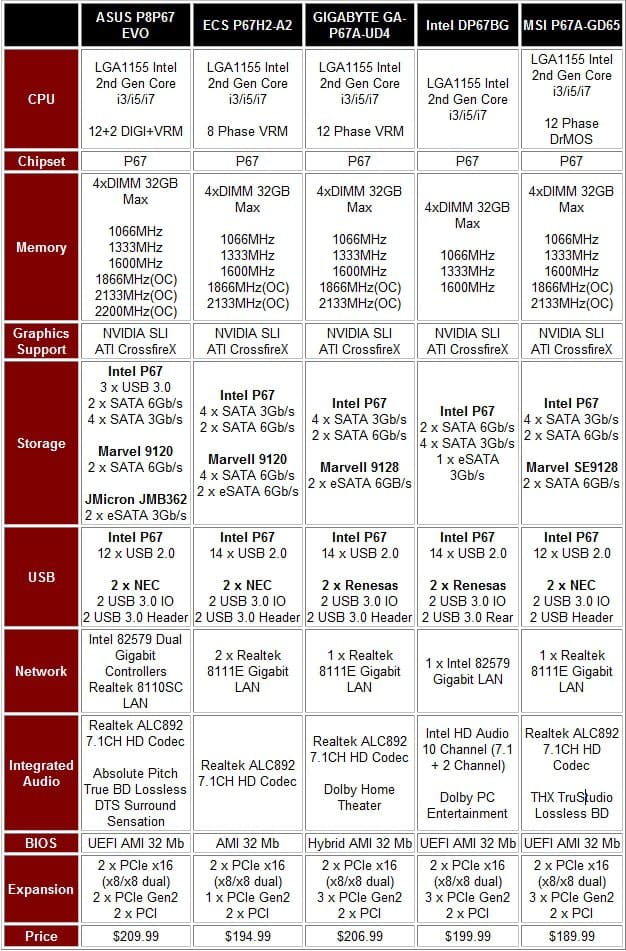 As you can see, all the platforms offer very similar features like USB 3.0, SATA3 (6Gbps), 7.1 channel HD audio, integrated LAN interface, dual NVIDIA SLI and/or ATI CrossfireX support. However, the major differences come down to the number of expansion slots, supported memory overclocks, audio software, and design layout. For example, the ASUS P8P67 EVO offers the highest supported 2200MHz XMP memory overclock as well as the most on board features of any of the boards. This partially justifies why it’s also the most expensive. GIGABYTE and MSI appear to have the most similar feature set while the MSI P67A-GD65 seemingly does it all for less.

Some of the boards offer a full UEFI BIOS. Like any BIOS, it’s extremely important they are well coded and stable. More on that as we get into our testing and evaluation including who’s doing their homework in regards to the new UEFI BIOS design. On with the round up!

ASUS has shipped a whole new arsenal sporting brand new heat sink designs and themes. ASUS keeps true to the Intel blue on dark PCB theme. The special features of the P8P67 EVO are hidden within its underlying Dual Intelligent II technology. We got an up close and personal look at Digi+VRM and learned that engineers have finely tuned this feature so well that even the 12+2 Phase VRM provides an impressive amount of clean power, rivalling higher end boards. Our video presentation and overview runs through the rest of the signature features.

In terms of layout, the P8P67 EVO is overall very clean with most every port option arranged to the outer edge of the PCB. Despite the many onboard usable expansion options, nothing really gets in the way of the usual suspects like the graphics cards. The build quality is definitely some of the highest seen from ASUS thus far which includes the well rounded motherboard accessory bundle. While the $210 price tag is the second highest of the bunch, it feels like there’s plenty of value underneath.