Here you can see the Core i7-980XE (left), Core i5-661 Clarkdale (middle), and Core i7-975XE (right). It’s all pretty uneventful looking except to say there’s no way engineers would’ve been able to pack 6 of the Nehalems 45nm cores on the same sized PCB.

Being an LGA1366 socket processor, the Gulftown is only going to fit on motherboards powered by the Intel X58 Chipset. Many of the X58 that are shipping today will probably already support Gulftown, but you should still check the retailer’s production page to double check. Otherwise, be prepared to flash the BIOS with a newer version if you have an earlier shipped board.

The main reasons why the 6-Core Gulftown is only supported by the X58 Chipset is the platform’s design. In a nut shell, it’s because X58 is a true power user chipset. It offers all the maximum resources available for professional users to accomplish their objectives in an expeditious manner. That includes full speed PCI Express lanes that share nothing with other components.

GIGABYTE sent us their GA-X58A-UD5 Motherboard flashed to the Gulftown ready F4 BIOS. The new retail XE CPU cooler was installed and given some bench time to make sure it works. More on that later.

Here is the break down of the test system:

Just a reminder or two here. Don’t forget to make sure the motherboard you’re ordering for your 980XE already has the BIOS needed to support the hexa-core processor. Otherwise, you’ll be sitting there with a system that boot up. Without another Core i7 to make that happen, you’ll be in a pickle. 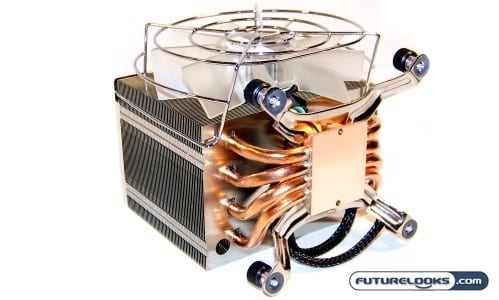 The new tower cooler, a departure from the little round hunk of aluminum, sports a polished copper base, copper heat pipes, and about five inches of stacked fins to help dissipate heat. As you may already know, copper heat pipes are excellent for efficiently carrying heat away from the processor. It’s up to the two speed (Q-quiet and P-performance) 92mm fan to keep all that cool. While we aren’t sure of the 92mm fan’s specs, these fans usually require some higher RPMs to do so.

We’d like to point out that the new Intel XE CPU Cooler did a much better job of cooling the 980XE than the old school cooler by far. With the fan speed on low, it idled at 26C and load was 68C. On high, it idled at 25C and hit a loaded high of 64C. 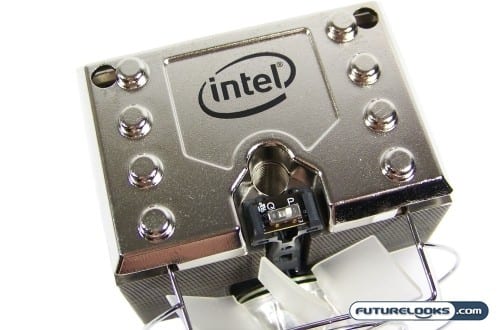 How was the noise? On the Q setting, the fan is roughly 31dB when measured two feet away. Using the P setting, noise levels hummed to a whopping 50dB! I started to wonder if the XE cooler was going to carry the motherboard off. It’s clear that the 92mm fan may not be the right choice and going with a much more efficient and quieter 120mm fan may be a better choice. There is still room for improvement as Intel may still consider that option.

This also tells us is that the old school retail cooler could not have handled the job of cooling the 6-Core Gulftown. The XE’s can do the job, but the design wastes a lot of air in different directions. A fan shroud would channel the air through cooling more efficiently, requiring less RPMs, and thus, hopefully drop some noise. The 130W TDP just doesn’t warrant the air plane propeller action. 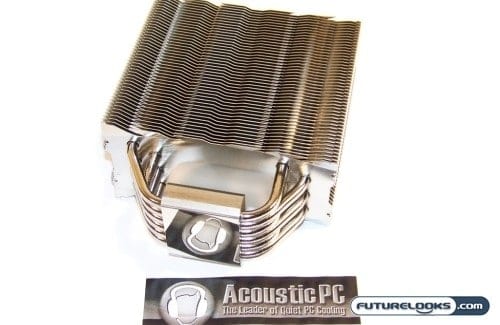 We didn’t want the new processor to suffer a heat stroke during some BIOS experimentation, sometimes called overclocking. The 6-cores can get quite hot once the voltages are applied. Thus, it was very necessary to use a Thermalright Venomous X CPU Cooler since we know these kinds of tower coolers do very well.

For example, the Thermalright Venomous X started off at 22C and topped out at 57C using a SilenX 120mm low RPM quiet fan, compared to the 64C of the new stock Intel cooler. Thanks to AcousticPC who carries the best quality made computer hardware to quiet your PC for providing this cooler.