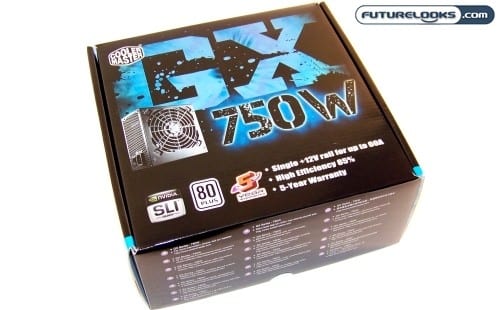 As the economy still continues on the road to recovery, the number of consumers looking to save some money on computer upgrades has grown. The entire market is learning to wheel and deal in order to continue to do business. This means manufacturers have to be more aggressive in both price and product quality. One component that has increased in price over the last 5 years, but is not seeing dramatic drops in pricing is the computer power supply.

Consumers are searching for affordable power supplies that can get the job done, but don’t mind sacrificing features like modular cabling, flashy paint jobs, and LED cooling fans. Thanks to our friends over at CoolerMaster, we may have a power supply solution worth consideration. Let’s take a very close look at the Coolermaster GX Series 750 Watt Power Supply and see if it’s right for you. 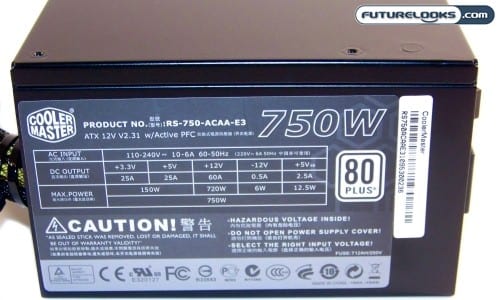 The GX 750’s specs alone suggest Coolermaster did their home work figuring out the right amount of power per rail in an 80Plus power supply. Instead of following weaker PSUs that waste more than 30 amps on the 3.3V and 5V rails, you get a very respectable 25 amps per rail. The 12V rail gets the bulk of the wattage, providing a massive 60 amp dose to keep your computer more than happy.

Being that this is an 80Plus power supply, users can expect at least an 80% efficiency at about 50% load. The features say typical efficiency is 85% which is just a bonus. What will really earn it higher marks is whether or not the PSU can maintain at least 80% at greater loads all the way up to full load.

Even though the PSU is rated to 750 watts, the maximum output is 900 watts. Based on experience, we doubt that the PSU is capable of reaching, or maintaining that amount of output. It’s more plausible that the GX 750 will maintain 800 watts if pushed to that limit. None the less, we expect the PSU to maintain 750 watts without issue if it wants our illustrious recommendation.

The unit comes in a smaller 650W version and the 750W version as tested. If you’re looking for additional specifications, you can find those on the CoolerMaster product page. The rest of you, follow me. 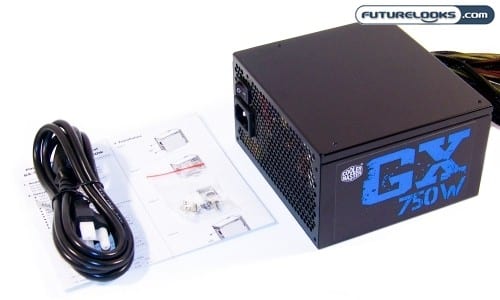 As you can see, just the bare minimums. After all, this is a value oriented power supply. Of course, you’ll get mounting screws, instructions, a power cord and the CoolerMaster GX Series 750Watt ATX Power Supply itself.

The non modular GX 750 is housed in black, which cuts down on costs without sacrificing the more important internal circuitry and black goes with everything. The power supply bears some weight which suggests that some good components were used in its design. It has a large 120mm cooling fan which appears to be capable of moving about 60 plus cubic feet of air per minute which means you should expect fan noise at around 25 db. 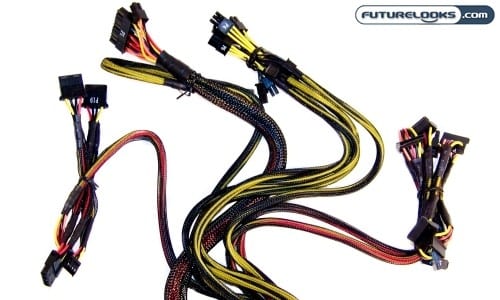 The GX 750 is equipped with four 6+2-pin PCI Express connectors for video cards, three 4-pin molex, one floppy drive connector, and nine SATA connectors on top of the standard 24-pin and 8-pin main power connectors. We’re not sure why so many SATA connectors. At least five 4-pin would seem more realistic given the devices gamers tend to connect to their PCs.