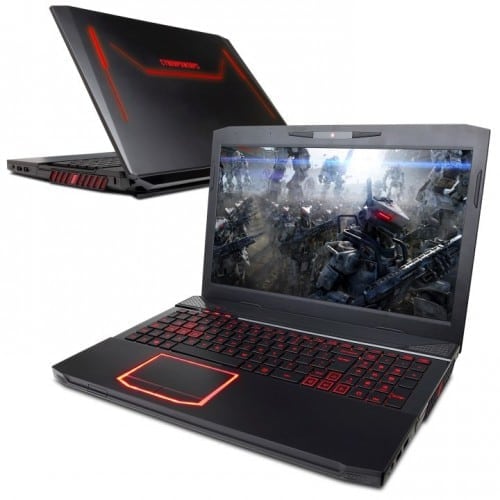 Gaming is not just a pastime; gaming is a way of life. Sure, we do all kinds of things on our computers. Our PCs are TVs, music players, workstations, phones, and so on; however, the games are what keep stress in control and our minds active. Since we don’t like leaving these behemoths behind, we may need to invest a CYBERPOWERPC Fangbook III HX6 for the road.

The Fangbook HX6 comes equipped with a Core i7 4700MQ and Nvidia GeForce GTX 860M graphics card by default as a solid core components. Combined with support for mSATA SSDs, 1 TB SATA 6.0 Gbps drive, 2 MP HD webcam, and anti-glare LED-backlit 1080p display, this is more than enough machine for most people’s needs. If this isn’t enough to quench your thirst for games, CYBERPOWERPC offers plenty of upgrade options too.

What makes the Fangbook HX6 different from other gaming laptops? Well, that’s probably the shortcut keys that control fan speed, backlit keyboard, and CPU speed to either save power or to push the gaming performance to the edge. You can configure your Fangbook today with more details below.

October 24, 2014 – CyberPower Inc. www.cyberpowerpc.com, a global manufacturer of custom gaming PCs, gaming laptops, and performance workstations, today announced the Fangbook III HX6, a gaming notebook PC that performs as hot as it looks, but knows when to cool its jets.

The Fangbook III HX6 is based on the Intel Core i7-4700MQ Processor and the NVIDIA GeForce GTX 860M graphics card, but unlike many gaming notebooks, CYBERPOWERPC offers a variety of CPU/GPU upgrade options. The 4th Generation Intel Core i7 mobile processors used in the Fangbook III HX6 offer varying levels of performance. The processor sips power when idle or under general workloads. It cruises at 800MHz, and then kicks up to 3.4GHz when you need it. The NVIDIA GeForce GTX 860M features 4GB of GDDR5 memory and exceptional power efficiency that can extend battery life.

The notebook features a 15.6-inch Full HD (1080p) LED-backlit display with anti-glare technology. This ultra-responsive panel is great for gaming and draws very little power to prolong battery life.  A two megapixel HD webcam is standard and located above the display to allow full screen video conferencing or Skype calling.

CYBERPOWERPC added several distinct features for gamers. The Fangbook III HX6 has an automatic “kickstand” which deploys when the notebook is opened to prop up the rear edge of the notebook to allow air to flow freely through the intakes on the bottom surface. This keeps components running cool and at their optimal speed, which leads to better long-term performance and reliability. The kickstand also makes the Fangbook III HX6 more ergonomic, tilting the keyboard slightly towards the user to reduce wrist strain.

Other unique features include three shortcut keys for extra intense gaming sessions, which can kick the cooling fan into overdrive, turn on the backlight mode, or underclock the CPU and reduce the fan speed.

The Fangbook III HX6 features an aggressive design to complement its name. A black and red color scheme appears throughout the notebook from mesh accents on the fan grills, to the lighting on the notebook’s lid, to the backlighting on the keyboard and LEDs that surround the trackpad. When the Fangbook III HX6 goes to sleep, the red LEDs on the input surface appear to “breathe” to let you know that the power is just a click away.

The Fangbook III HX6 can be customized with additional high-performance gaming memory, a variety of storage options including mSATA SSDs, a higher resolution display, and your choice of operating system. All CYBERPOWERPC gaming notebook systems include a 1-year limited warranty. For more information visit: http://www.cyberpowerpc.com/ system/FANGBOOK_III_HX6-100_ Gaming_Notebook/