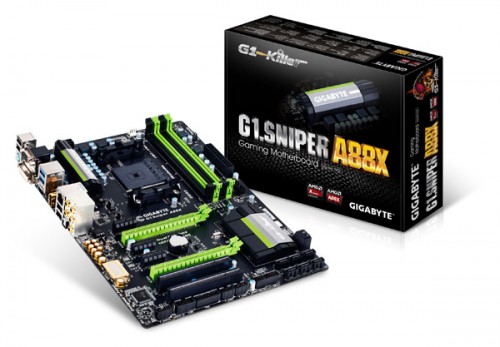 It is that time again! AMD getting ready to release a new series of processors. This year, it is the A-Series Kaveri APU based on the Steamroller architecture. To ensure support for these new chips, GIGABYTE has now officially announced that all their FM2+ motherboards based on the A88X and A55 support Kaveri. They’ve also been showing off the upcoming A78 based FM2+ boards which are also designed with Kaveri in mind.

GIGABYTE always does well when it comes to AMD backwards compatible processor updates. In fact we have the GIGABYTE G1.Sniper A88X on the yest bench. It’ll be put through the paces first with the A10-6800K and then later with the Kaveri A10-7850K.  This will allow the battle to be on equal grounds. This is great news for those who currently own a GIGABYTE A88X motherboard because your drop-in upgrade is right around the corner. What more could you ask for when it comes to preparing for a new processor release?

GIGABYTE and its customer have been ready and patiently waiting and the wait will soon be over. For more details about the Kaveri pared with GIGABYTE boards, check on the full press release below.

GIGABYTE Announces Official Support for AMD A-Series ‘Kaveri’ APUs on A88X, A78 and A55 Based FM2+ Series Motherboards

“These FM2+ Series motherboards from GIGABYTE are the ultimate showcase for our new A-Series APUs,” said Bernd Lienhard, corporate vice president and general manager, Client Business Unit, AMD. “In collaboration with GIGABYTE, AMD is proud to enable a truly optimized user experience in terms of raw computer performance while creating an industry-leading visual and audio experience with the latest generation of our APUs.”

GIGABYTE FM2+ Series motherboards also integrate a range of features designed to ensure the long-term stability and longevity of your PC. GIGABYTE DualBIOS™ ensures users are protected from BIOS failure, while an exclusive 2x Copper PCB design optimizes heat dissipation from the critical power delivery areas of the motherboard. One-Fuse-per-Port ensures each USB port has its own dedicated power fuse that prevents unwanted USB port failure.

Maintained by the HSA Foundation, HSA is a system architecture that allows accelerators such as the graphics processor (GPU) to operate at the same processing level as the system’s CPU, providing up to 50 per cent more GPU performance and up to 20 per cent more x86 instructions executed per cycle compared to previous implementations. The new AMD A10 series APUs are the first desktop PC processors to implement the performance advantages of HSA.

The latest AMD A-Series APUs are also the first equipped with AMD TrueAudio Technology a new programmable audio pipeline that fundamentally redefines how digital audio is processed. By allowing the graphics cores to handle sound processing for spatialization, reverb, limiters and simultaneous voice processing, game developers have greater artistic freedom than ever before, allowing for a vastly more realistic and compelling audio experience.