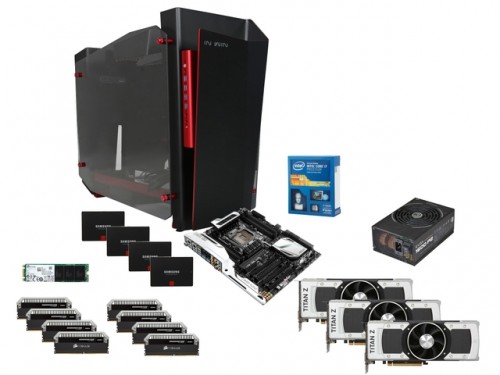 When retailers bundle components together, there’s a chance you can save some money, and take the guesswork out of your latest build. Sometimes, retailers have fun and put out some insane builds that you might never buy. But they do get us dreaming/thinking about what our own “supreme builds” might end up looking like. Although I’m sure retailers create these with the best of intentions, and for their own amusement, compatibility is still the key to having a dream build that doesn’t become a nightmare. And at $16,999 US, NewEgg’s “Supreme Combo” looks like it might have one little hiccup, that thwarts an enviable build.

The build starts off with an amazing bevy of high end components, based on an Intel X99 platform. You get the ASUS X99 Deluxe board (reviewed here), matched to the Core i7-5960X 8 core CPU (reviewed here), which forms the heart of the system. All eight memory slots are filled with two Corsair Dominator Platinum 32GB (4x8GB) DDR4 2666MHz kits. You also get four Samsung 850 Pro Series 1TB SSDs, and for a system drive, you’ve got a Plextor M6e PX-G512M6e 512GB M.2 2280 SSD that you can plug right into the slot built right into the ASUS X99 Deluxe.

Obviously, for a build like this, you must have three NVIDIA GeForce GTX Titan Zs. To power everything, you’ll need an EVGA 1600W 80PLUS Platinum power supply. And to house everything, only the In Win S-Frame will do.

But wait a sec… Did you say… THREE NVIDIA GeForce GTX Titan Zs? 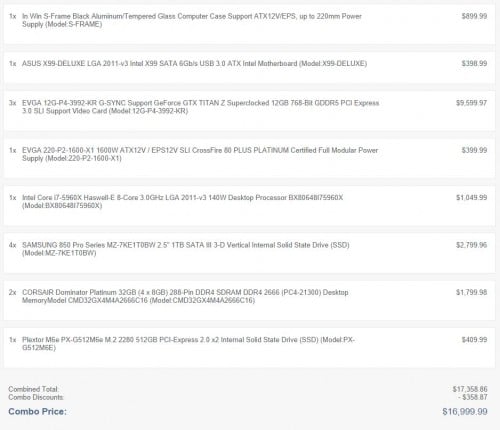 The build’s reckless abandon is applauded, but on the compatibility side, it’s a bit enthusiastic. While the NVIDIA GeForce GTX Titan Zs are amazing cards at an even more amazing $3199 US a piece, you simply can’t have three of them running together for a few reasons: 1) The ASUS X99 Deluxe doesn’t have enough slots to support three triple slot video cards 2) The In Win S-Frame doesn’t have enough slots to fit three triple slot video cards 3) NVIDIA supports up to Quad SLI.

Now normally this wouldn’t be a big deal with single GPU cards, like the recently launched NVIDIA GeForce GTX 980s. However, the GTX Titan Zs are dual GPU cards, which means that, at most, you could run two of them. And in this configuration, you wouldn’t even be able to fit the third into your system. That’s potentially a costly mistake!

The build is ambitious, we’ll give NewEgg that. But it would have been great if the combo actually worked together. And while it’d be pretty bawlin’ to have a “spare” Titan Z just lying around, to the one or two people that might have ordered this combo, and took a mortgage out to afford it, this might not have been so funny. Especially for those people that wanted TWO of them, when the quantity is limited to “1 per customer”. After all, you do save a whole $358.87 US if you bundle it together.

NewEgg has pulled the combo out of its online store (probably because we asked them about it, and pointed out the error), but let’s not give them such a horrible time for at least showing one very ambitious way we can put some of the best hardware together. Minus one GTX Titan Z of course.