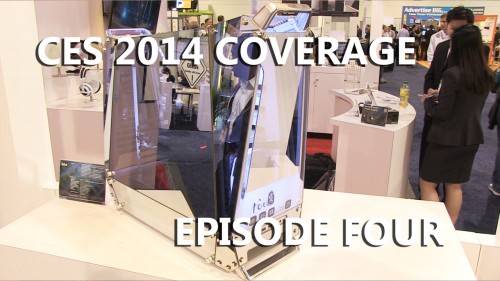 The long awaited Episode Four, and final video, of our four part CES 2014 coverage is finally here, presented in glorious 1080p HD! After giving you Episodes One, Two, and Three, we are a little sad that we have to say good bye to the International CES for yet another year. But we’re also glad that we’ve finally gone through all 360 minutes of footage and have brought you some of our best coverage to date. In this episode, we’re featuring yet another new products from InWin as well as new technology from NVIDIA. LaCie (a Division of Seagate) also gives us the scoop on the only external Thunderbolt 2 storage solution that can keep up with the new Apple Mac Pro. Finally, we return to Corsair for even more updates as well as Thermaltake, who have many updates to their Tt eSPORTS line up.

If you’re having problems viewing the video, check it out here on our YouTube Channel.

(00:21) – InWin shows off one of the most expensive production PC DIY cases to date. The new Tou chassis is an extremely creative endeavour for the company. If you thought last year’s D-Frame was impressive, then you have really low standards. The Tou will be available in extremely limited quality and will cost you $1000 USD if you want one of your own. I wouldn’t recommend taking this to a LAN party (although it would make your system harder to steal).

(o1:29) – NVIDIA is finally ready to bring their new G-SYNC technology to market, which was announced late last year. If you are an owner of a GTX 650 Ti Boost or better GPU, all you need is a G-SYNC enabled monitor to get the buttery smooth frame-rates provided by this lag/tearing/headache removal technology that allows your monitor to talk directly to your GPU. And if you have an NVIDIA SHIELD, you’ll also want to hear about the free GRID Server games that you can play right now for free.

(06:03) – LaCie, which is a division of Seagate, shows off what they are doing to match the performance of the new Apple Mac Pro’s internal PCIe SSD solution. Their external solution called the “Little Big Disk” definitely is what it is called. It’s extremely “little” with two M.2 type SSDs sandwiched together inside for storage, and it’s got “big” performance, pushing at least 1000MB/s, which matches the performance of the new Mac Pro’s internal storage speeds. This is one of few upgrades that the new Apple Mac Pro can take advantage of due to its lack of internal expansion. There’s more info in the official press release. LaCie also outdoes themselves with an even more insane piece of art/technology. If you think last year’s Starck Drive was nuts, wait till you see the Sphere.

(13:00) – Corsair joins us again to show us their latest PC DIY products. They give us two new cases including a full tower and a highly anticipated mini-ITX case called the Obsidian 250D which appears to compromise little in what you can put inside. We also get a look at their AX1500i PSU which will be ridiculously expensive, and their new H105 240mm radiator all in one liquid cooler which was a request from their fans, fulfilled at CES 2014.

(21:52) – We return to the Thermaltake suite to see their entire line up of Tt eSPORTS peripherals and headsets. Highlights include a wireless version of their Level10 gaming mouse, new, and more stylish, Tt eSPORTS gaming headsets, and we even see some updates to their gaming keyboard line up.

If you’re looking for more CES 2014 coverage, make sure you have a look at Episodes One, Two, and Three as well as the press releases and news that our team has posted during the week of the show. We hope you enjoyed all our video coverage from the show. Please let us know in the comments what you thought about the products you saw and let us know which ones in particular you want us to bring in to torture and test.

And if you’re still looking for CES 2014 coverage, we might have some “Extras” that we’ll be posting in the next few days on our YouTube Channel. Till next year!