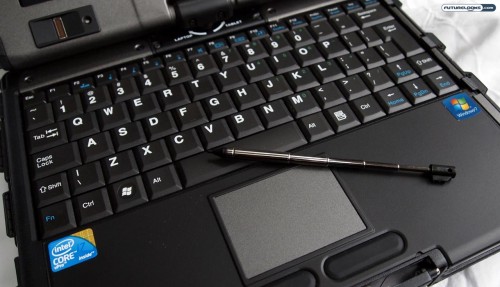 Even though it is quite bulky for a 10.4-inch notebook, the Getac V100 isn’t all that heavy. Don’t get me wrong; it’s definitely heavier than consumer-oriented products like the Gigabyte M912, but at 5.0 pounds, it’s not any heavier than many notebooks. The unit is also completely silent thanks to a fan-less design.

I’ve grown accustomed to wide-aspect displays in recent years, so working on a standard aspect display was a little jarring at first. Aside from that, the display can be very bright, the full-size keyboard is reasonably comfortable, and the five hot function keys toward the front of the device are quite handy. It’s also nice that the webcam can rotate.

You really do feel the hefty construction when using a product like this. There’s a reason why they cost what they do. 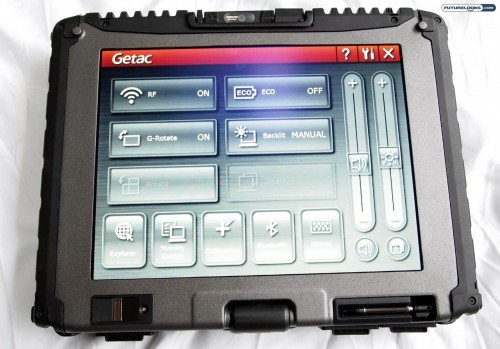 If you were to approach me with the Getac V100 a couple of years ago, I would have told you that the Tablet PC side of its equation is pretty much par for the course. You get a resistive touchscreen that works best when you utilize the retractable stylus. You can use handwriting recognition or an on-screen virtual keyboard. Tap, tap, and go.

There’s also an orientation sensor, so when you hold the tablet in portrait mode, Windows 7 will orient itself as such. Flip it over and you get landscape mode (even “upside down” should you feel so inclined). The resistive touchscreen interface is pretty standard in the industrial world, but now that we’ve grown accustomed to capacitive touchscreens, the resistive experience is jarring.

Getac went with a resistive screen understandably though, of course, since it needs to be “glove friendly” for when users are in harsher environments. This allows for greater precision, but it’s not nearly as responsive as what you’d get on a Galaxy Tab or Apple iPad. This is to be expected. However, it’s definitely worlds better than a cheap Android tablet.

So, how tough is tough? Just as we cooked the ioSafe SoloPRO external hard drive in the oven, we had to put the Getac V100 through its paces too.

The first test is the water test. In the video above, you can see the Getac V100 being put under a running tap for several minutes. I try tilting the V100, potentially exposing the screen, keyboard, and ports to water damage.

The second torture session involves the drop test. To do this, we dropped the notebook from a height of three feet, both open and closed, checking to see if it was still operational after each successive drop. Of course, this test is nowhere as rigorous as tossing it down the side of a canyon, or running over it with a car, but you get the idea. And it’s clear that most consumer grade notebooks would not survive unscathed with these tests.

The verdict? Yes, it’s pretty tough. We would have liked to have taken the torture tests a few steps further, but we weren’t given the green light to do so. But if you do want to see more fun with tablets, you can check out our GETAC HQ Tour video where we manage to get the execs to do evil things to their own products.