To test the battery life, I ran a 720p HD video on a continuous loop in Windows Media Player. The Wi-Fi radio was left on but the connection was dormant. Both screen brightness and volume level were cranked up to the maximum too. The HD AVI video file was just under an hour in length.

Based on these circumstances, the included 7800mAh lithium-ion battery was able to hold up for about two and a half hours before the computer hibernated on its own. This is based on the power setting configured so that hibernation is automatic when battery level is detected to be less than 5%.

Running through the rest of our usual battery of benchmarks and test, we discover the following. 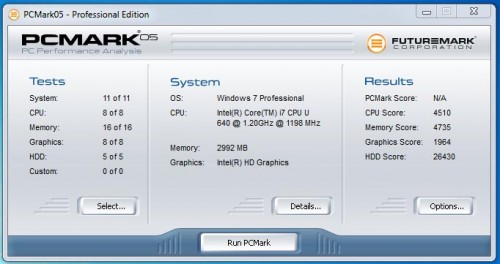 Even though this rig sports a quad core Core i7 processor, its PCMark05 performance leaves something to be desired. The CPU score of 4510 is decidedly lower than the 6641 earned by the i5-powered Samsung R780. The clock speed on the CPU is quite different, of course, giving us only 1.2GHz of battery saving performance. There was no overall PCMark score, but it did get a memory score of 4735, graphics score of 1964, and HDD score of 26430. 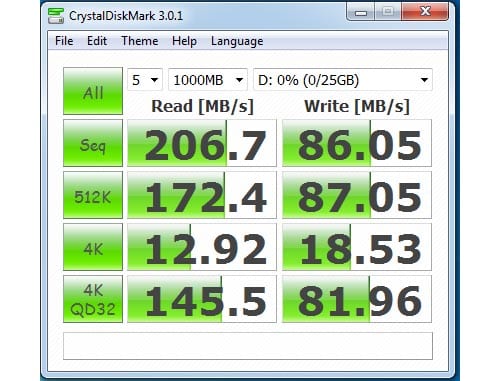 In a sequential test of 1000MB data packets, the 25GB data partition on the hard drive was able to get 206.7MB/s read speed and 86.05MB/s write speed, as recorded by CrystalDiskMark 3.0.1. Given the lower scores on PCMark and 3DMark, the performance boost offered by the SSD upgrade probably wouldn’t be as noticeable under real world conditions; the shock resistance, however, would prove useful to certain users.

Obviously, the Getac V100 was never intended to be a gaming rig, but I ran the Street Fighter IV benchmark anyway. With maximum settings, it rarely broke the 10fps threshold. Even with the lowest settings (including no background), it scored an “E” with 19fps. It’s definitely no match for the “Dragon Punch”. 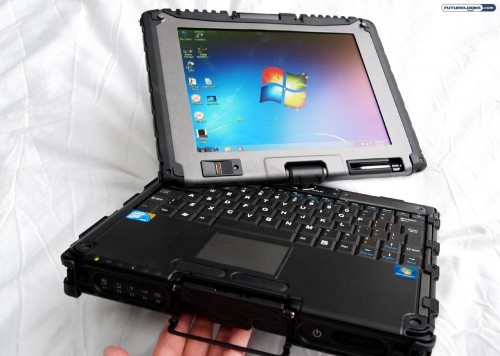 It’s not really all that fair to compare regular consumer-oriented notebooks to a beast of a machine like the Getac V100. It’s not even fair to compare it with business-oriented laptops and tablet PCs, but it’s in an entirely different category.

From a performance standpoint, hardcore users are going to be left disappointed. You won’t be able to play any games more complex than Bejeweled on here. It’s better than an Atom-powered netbook, certainly, but it’s anything but a hardcore gaming rig. That said, given the typical applications where it would find itself, the Getac V100 should be able to hold its own. With a bumper to bumper warranty and a starting price of $3699, you definitely pay for this toughness.

The fanless design, heavily rubberized body, covers for all the ports, waterproof full-size keyboard, and military grade ruggedness make this machine suitable for everywhere from Siberia to Sudan. It’s not for the average Joe at Starbucks, but if the build quality of the V100 is any indication, Panasonic’s ToughBook could have some serious competition on its hands. If we had a “Tough as Nails” award, that’s what I’d give the V100. But for now, we’re going to give it our “High Peformance” award because it truly performs at a high standard of toughness.