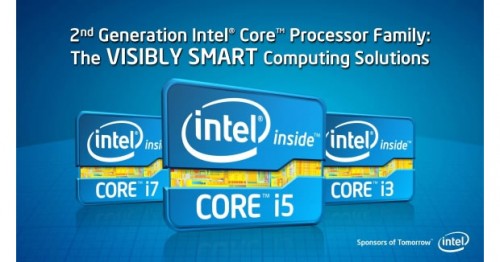 Sandy Bridge is Intel’s next generation 32nm architecture processor adding to their already illustrious CPU genealogy. While Sandy Bridge is architecturally similar to the Core i3, i5, and i7 processors featuring an integrated memory controller and on-die integrated graphics, it is indeed a new beast.  The new on-die graphics core promises to change our perception of what integrated graphics can offer and new internal optimizations make the processor far more media aggressive than anything  have seen to date. Let’s go over the features that make this new platform special and see what the benchmarks say. 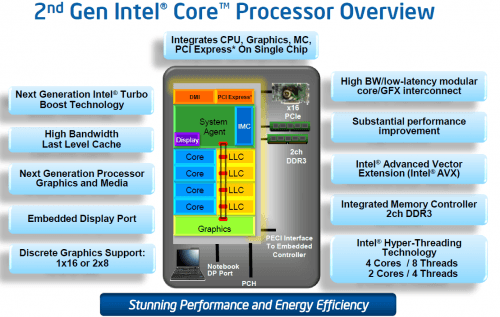 The new architecture bridges performance gaps across desktop and laptop platforms inside the all new 32nm architecture. The overall goal of the architecture is to improve upon some very useful existing features like Intel Turbo Tech while offering a few new ones that boost performance in multimedia related tasks.

Sandy Bridge utilizes a new high bandwidth LLC (last level cache) and is able to dynamically access the cache as it becomes available skipping the need to transact with memory. This keeps much of the execution in the cache which further assists overall performance. The end result is much greater performance when the cores are in Turbo mode and ripping through both encoding and GPU heavy tasks. 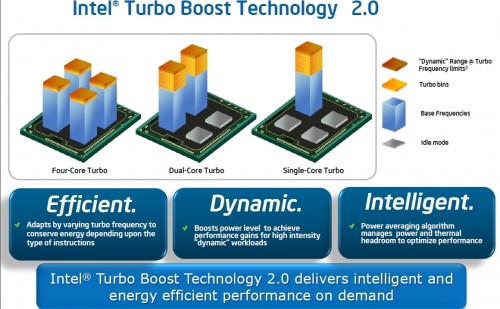 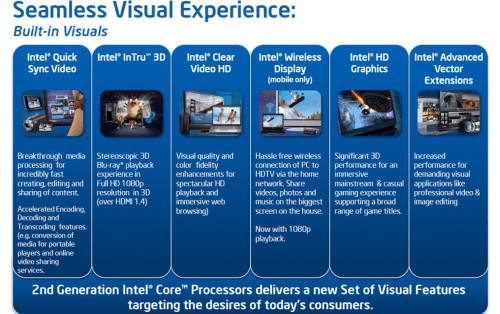 Being on-die gives the GPU immediate communication with the CPU through the previously mentioned LLC cache and video processing is completely hardware driven. Whether it be H.264 or MPEG2. For early adopters of 3D capable HDTVs, Sandy Bridge graphics fully supports Stereoscopic 3D Blu-ray. The end result is a far more aggressive GPU performance and potential overclocking performance.

Since the launch of Sandy Bridge earlier this month, Intel has been working closely with Lucid Technologies to bring us some worthwhile improvements to the platform. First, P67 platforms using a discreet graphics solution will still be able to utilize the platform’s capable Intel Quick Sync (IQS) at the same time. At launch, that wasn’t possible. They’ve also made it possible to utilize dual displays with the H67 chipsets as well.

Even with these features running, we didn’t see the Core i5’s resources top 55% while transcoding and running a graphical application. That of course drops when using a discreet graphics card. And, the 3D feature encompasses all facets currently offered in the world of 3D whether pictures or movies. A few more details can be found in our CES 2011 coverage.