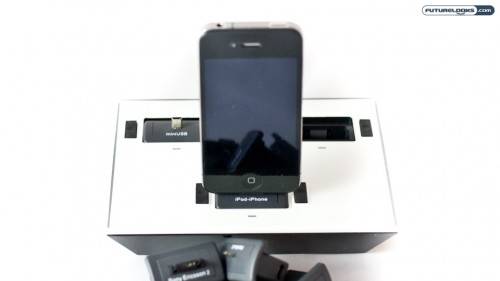 Unlike some other universal chargers that try to cram tons of different plugs onto the device, the i4 lets you change the interchangeable tips in three slots to match your electronics and has a USB charging slot on the side. This allows you to charge 4 different devices at the same time without having to fumble around with all the different chargers they come with.

The system actually works quite well and the i4 comes with six different tips. Plug any tip into the three open slots and you’re ready to go. If you want to change any of the tips, press the releases on the sides of the slot and the tip pops out (it pops quite high, actually) easily.

My only complaint is that while the miniUSB, microUSB and iPod dock chargers are probably useful to nearly everyone, it comes with tips for Sony Ericsson, Samsung and Nokia devices and at least two of the three will collect dust for most people.

If you purchase the i4 in stores, you will be stuck with these six tips even if you can’t use them. However, if you purchase the unit on the Idapt website, you can choose any four that you want. Each additional tip is $9.99. The i4 is available for $59.99 and comes in your choice of seven different colors. I have one in white but I didn’t see that option on the website. It’s not cheap but this is one of the better, sleeker ways I’ve seen to clean up your charging station. 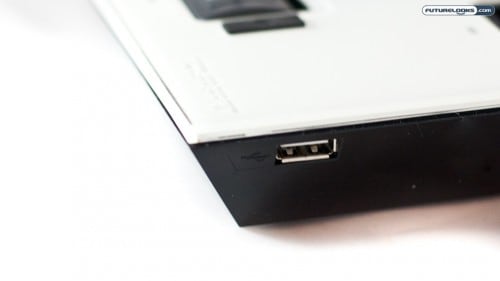 One note for iPad users: Don’t put your iPad on the dock. The sheer weight of the unit will likely topple over and snap the connector clean off. We recommend you use the side USB port to charge up your beloved iPad.

Do you remember the era when Apple designed all their computers to look like fruit in various colors before they switched the sleek, brushed aluminum industrial design that has won awards all over the world? Well, it seems that someone is trying to bring that look back thinking “Hey, if fashion can do it with skinny ties and fur…”. 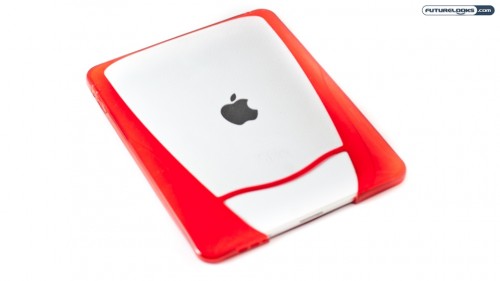 The whole iFruit thing sort of relaunched Apple but there’s no question that what Steve Jobs and company are doing now looks so much better than that stuff they were doing in the late ’90s so there’s no other way for me to say this: the iSkin Vu looks absolutely awful. The iPad is a beautiful piece of design but it is instantly ruined when placed inside an iSkin Vu. Sure, there are those that will enjoy the retro stylings, I’m sure but they’ll mostly be using the ugliness ironically or they’re probably blind. 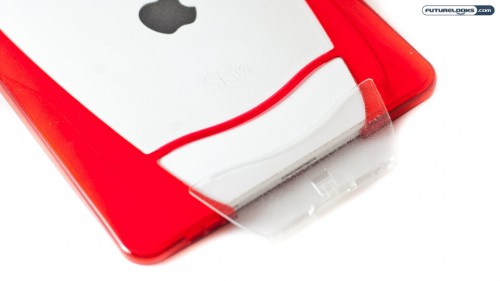 The back of the Vu is a piece of clear, semi-rigid plastic covered in a hypnotic pattern of squiggly lines and circles while the outer edge is a soft silicone, which allows you to easily squeeze your iPad in place. At the bottom is a panel that, when removed, grants access to the docking port. I had a bit of trouble getting it to stay on and the design seems clumsy with a fully removable piece. The Vu should protect your iPad against scratches on the back but probably wouldn’t do a whole lot if you dropped it. The outer edges would give it a little bounce but I’m not about to test that theory. Also, in my experience with silicone protective skins, they tend to leave a hard to remove film on your device if you don’t take it out and clean it every so often.

What can you take away from all this?  For me, I learned that iPad accessories aren’t very good and they’re usually expensive.  It seems that every company that makes anything for the iPad thinks that just because we’re willing to shell out $500 for a really big iPod Touch means they can charge double what a reasonable price would be.  Truth be told, the iPad is a very robust device that isn’t going to scratch if you put it on a table or breath on it.

If you simply must protect your iPad, grab an Invisible Shield instead.  It’ll preserve that great Apple design and you’ll be able to sell it in mint condition later when Apple inevitably releases the iPad 2 GS Touch Nano or whatever they decide to name it.

But if your iPad owner is a free spirit and doesn’t require protection, a pre-paid iTunes card would probably do the trick.  For whatever reason iPad apps are a little more expensive than their iPod/iPhone counterparts…and everyone has to get their Angry Birds HD on at some point. Happy Holidays!