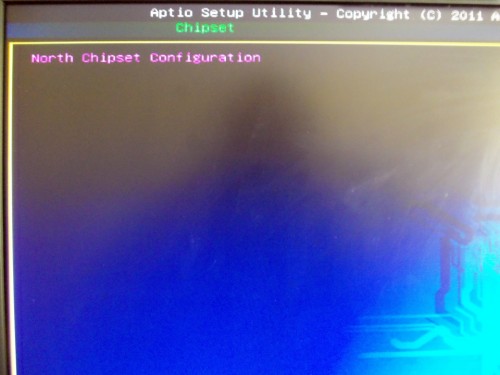 The BIOS implemented by ECS for the A75F-M2 has been taken from another motherboard and altered slightly to work with an APU. This is clearly the case when there are sections on the BIOS for Northbridge and Southbridge. The Northbridge BIOS area is empty and the Southbridge area has some of the FCH options. 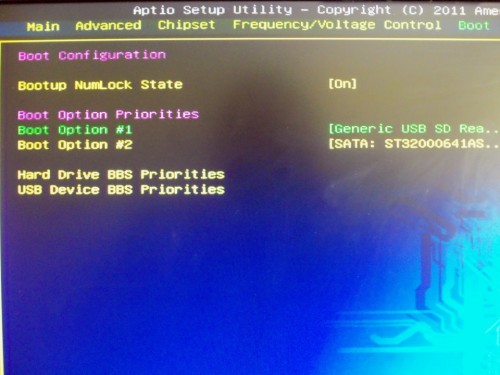 I do like the boot section of the BIOS as it clearly shows you what drive will be booted and in what order. In cases where booting from a device is not possible, it is simply not listed. This removes any confusion such as when a BIOS will simply list the interface and not the individual drives. A few BIOS control panels I have used will list the interface for the boot order and list the individual drives in a separate menu which can be misleading.

The most disappointing issue with the ECS A75F-M2 is the complete lack of any overclocking options. While this is an issue for consumers like myself, I am not their target audience. On their site, ECS states this board targets commercial business and family use. I still have to hold this against them since it is sold in public market places like Newegg.com and Amazon.com for general consumers and many of them do want these options onboard, regardless of pricepoint.

PCMark07 is a good way to gauge your computer’s overall abilities and capabilities. While the provided scores by themselves mean little, they are a base for comparison to other system configurations on Futuremark’s site. PCMark07 is rather new and the database of scores is not nearly as large as PCMark06, but should still give you a good idea of where your system stands. 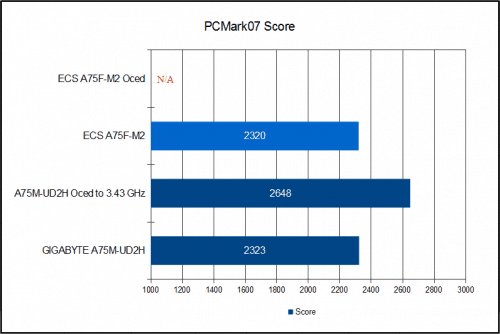 As you can see the performance at stock is the same as the GIGABYTE A75M-UD2H. As all of the core components of both boards are provided by AMD, I expect this outcome. When comparing it to other systems  online you quickly find it is better than any desktop with no dedicated GPU. Even systems with more powerful Intel Sandy Bridge chips can’t make up for the GPU tests in PCMark07.

Overclocking was a different story. As I stated before, the ECS A75F-M2 offers no overclocking options. While a simple bus speed change provides a 335 point boost for the UD2H, the M2 simply can’t do the same.

The synthetic graphics test by 3DMark11 should give a good idea of the difference in performance between these two motherboards for current generation games. This should give those looking to save some money on a entry level gaming system an idea of how much performance they may lose. 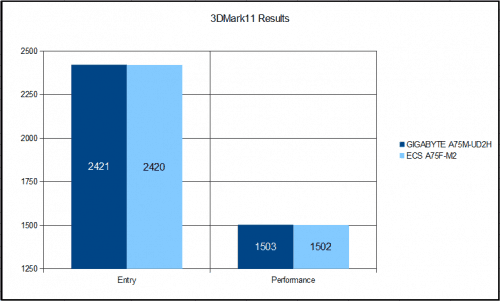 The ECS A75F-M2 performs exactly the same at stock settings. Unlike high-end motherboards, there just isn’t enough difference in the APU motherboard designs to alter performance.

Now that we have an idea of how close we can expect performance to be, lets put it to the test. This time we will test the graphics across two games and DX9 through DX11. All test done with the resolution of 1920 x 1080 and default settings for each test. The only exception being Alien Vs. Predator DX10 in which I simply disabled the DX11 features such as Tessellation and Advanced Shadowing. 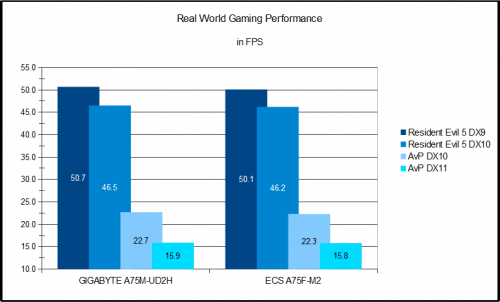 I run each gaming test three times to ensure consistence and use the best score for comparison. As with the Synthetic benchmarks, the ECS falls 1.76% behind in the worst case. This doesn’t even translate to 1 FPS slower, resulting in no real difference here either.

Now we will look and SATA throughput which should follow the trend of there being little to no difference in performance. This test is good for those looking to build an AMD APU based media server or HTPC since data throughput for hard drives will be important in those cases. Also being able to save a little on the motherboard can help work toward more hard drive space. 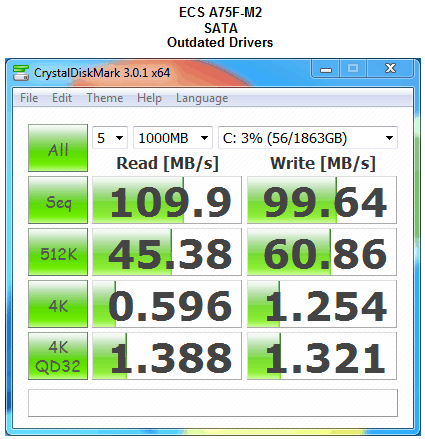 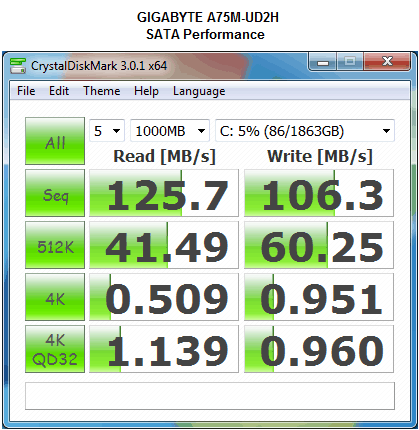 The ECS board does not perform well in the sequential SATA test; however, this is not the fault of the motherboard. The 1.2.1.296 AMD AHCI drivers being provided by ECS on their site are dated 3/14/11. The 1.2.1.269 AMD AHCI drivers on GIGABYTE’s site are dated 6/1/11. Once I installed the drivers from GIGABYTE on the ECS board, its performance in sequential reads and writes matched that of the GIGABYTE A75M. While the motherboard ultimately proved to have the same performance, I have to hold ECS accountable for providing outdated drivers to their customers.