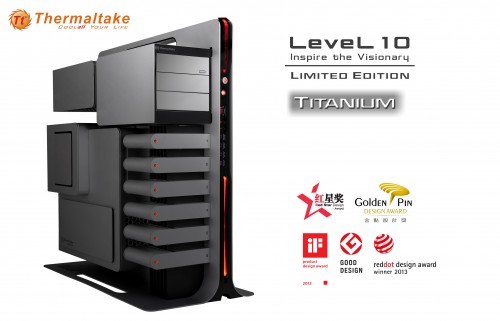 Admittedly I’m a fan of Thermaltake’s Level 10 case, the original Level 10 case that is. It was a very unique case with some interesting construction and design choices. Sadly I never got a chance to get one before they disappeared. Now if you’re like me, you’ll be glad to hear the latest announcement from Thermaltake. They are bringing back the Level 10, but as a Titanium Limited Edition.

Announced as a prologue to their appearance at COMPUTEX 2014, this is actually a biennial announcement and a follow-up to previous limited edition Level 10 cases. This newest limited edition will be clad in titanium, as you’d suspect, but that’s not the only thing new in this case. The Level 10 Titanium Limited Edition is upgraded to 6 EasySwap HDD bays and has 4 USB 3.0 external ports. Thermaltake has also made some improvements to cooling performance.

Thermaltake will be doing a full unveil at COMPUTEX 2014, and you can check out that and much more on Futurelooks. Until then, we’ll just have to make do with the press release below.
[hide-this-part morelink=”Full Press Release”]

Thermaltake at the COMPUTEX 2014
World Premiere of the New Thermaltake Level 10 Gaming Station Titanium Limited Edition : There Can Be No Substitute for the Best
500 units limited edition pre-order in July & officially launch in September

Taipei, Taiwan – 14, May 2014 – Thermaltake biennially announces a special edition of Level 10 in a Titanium finish, restricted to 500 builds worldwide, will take orders in July and time to market in September. Designed in collaboration with BMW Group DesignWorksUSA since 2009, Thermaltake Level 10 Series are highly appreciated and gained numerous awards like Red Star, IDEA, Good Design, Golden Pin Design, iF, reddot, and d&i for its intelligent design in succession. From the very first launch of Level 10, Thermaltake has redefined the architectural aesthetics of chassis design, continuously driving toward the corporate mission of "delivering the perfect user experience". In Summer, Thermaltake Level 10 Titanium version would convey a unique and unmatched massage to everyone with modern, innovative, futuristic and stunningly elegant style which will revive the famous Level 10 Gaming Station Titanium Limited Edition at COMPUTEX Taipei 2014 (Nangang Exhibition Hall, 4th floor, booth no. M620), from 3rd- 7th June, 2014.

Titanium Trend on the Move
Going through the era of black and silver, Titanium limited edition presents Thermaltake's self-breakthrough spirit and the boldness in making innovation. As a premium yet rare material, Titanium not only expresses the quality of durability, light weight, dent- and corrosion resistance, it is also the prefect representation of being able to deliver the passion for visual aesthetics that derived from demanding immersive game play and multimedia entertainment enthusiasm. Thermaltake believes that the new Level 10 Titanium Edition will take the series to a new peak.

The "Level 10 Titanium Limited Edition Gaming Station" is a significant leap forwards from the Level 10 that preceded it. Level 10 is upgraded to 6 EasySwap HDD bays to meet high-end enthusiasts' expectation. Designed with innovation, this limited gaming tower is equipped with 4 advanced USB 3.0 ports that accommodate all devices such as high speed hard drives, high performance gaming mice, headsets and any other peripherals that are in need of high speed transfer rates. The asymmetric arrangement of 7 robust vertical heatsinks and the horizontally located individual components creates a strong architectural statement, making it possible to take advantage of excellent airflow to vastly reduce temperatures on system components.

Thermaltake will celebrate its world premier at the upcoming "COMPUTEX Taipei 2014" on 3th June.  For more information or to purchase in advance please contact the local distributor or retail stores near you. It's a once every two year chance for you to get it on the trend, don't miss it!

About Thermaltake
Thermaltake Technology was established in January, 1999 and has been market to the world with “Thermaltake” brand name ever since. The brand personality of Unique, Aggressive, Vivid, and Stylish makes Thermaltake an expert in creating Exciting things and Fascinating environment for gamers and enthusiasts, also Keep them Constantly High physically and mentally.

Moreover, Thermaltake Technology get close to consumers and observe lead users’ behavior and requirement, to design aesthetic and high quality products which will greatly improve system performance and bring the user to the up most potential. With innovative design and unique style, Thermaltake products spread rapidly among the enthusiasts in DIY market and soon become the number one choice for PC DIY enthusiasts worldwide. Official website : www.thermaltake.com