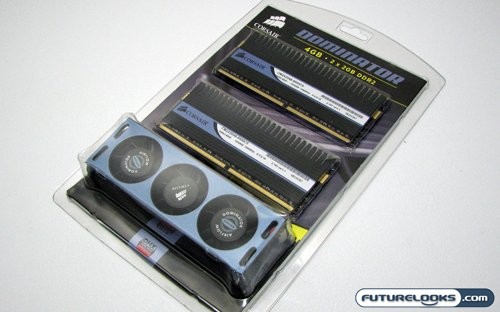 When Windows Vista was released, we were suddenly forced to rethink our standards for minimum memory in a system. With the current versions of Windows XP, 512MB or RAM could get you by, 1GB was considered the minimum, and 2GB was the power-user option. Vista caused an over-night doubling of those numbers. Thanks to the release of ever-more punishing games, and the drop of RAM prices, 4GB is much more attainable and far more useful. The Corsair Dominator 4GB PC2-8500 RAM Kit is just such a product, providing 4GB of dual-channel DDR2 memory for just under $150.

This memory kit has Corsair’s normal quality fit and finish, and provides you with two high performance 2GB modules for a decent price. They feature Corsair’s DHX cooling solution, which is unique to the Dominator line of memory. It includes an aluminum heatsink attached to the RAM chips, and more interestingly, the heatsinks themselvs are attached directly to the PCB that the chips rest on. Below are some additional highlights from Corsair. You can of course find lots of info on the product home page.

As noted, the kit also includes Corsair’s optional AirFlow cooling system. This set of three fans mounts to the RAM slots by way of two clips, and provides active and direct cooling to the RAM. This is said to aide in overclocking, though if you have a good enough CPU cooler that moves enough air, it may not make any difference. We’ll have to find out. 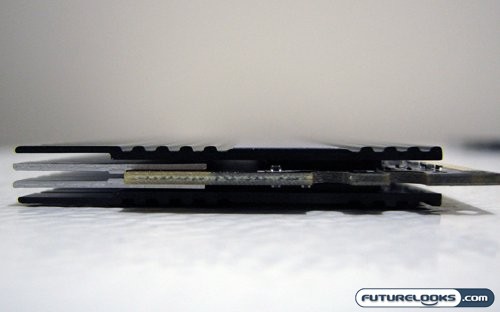 The addition of the heatsinks that are part of the DHX cooling system make for a fair addition in the height of the chips themselves. Those with large coolers like the Cooler Master 212 should take note, as this may force you to either reconfigure the cooler or move the RAM to different slots. As for those of you with coolers similar to the ThermalTake DuOrb, you may just be out of luck and have to replace the cooler entirely or forego using this RAM. Your mileage may vary or course, but you are warned to be mindful of you system dimensions.

As for the DHX cooling system itself, it’s a rather interesting design. While I have seen RAM with standard heat spreaders, I’ve never seen an additional heatsink attached directly to the PCB. Corsair actually went so far as to design this portion of the PCB specifically for heat transfer. Hopefully this attention to detail will pay off. 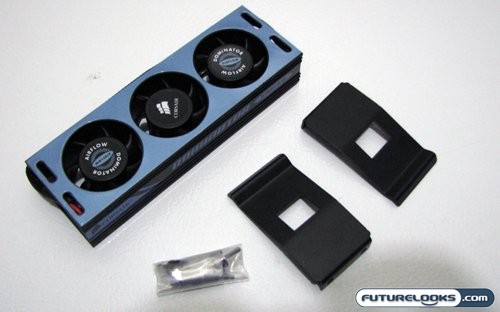 Corsair’s AirFlow fan attachment is as simple as it sounds. It’s a set of three 40mm fans, mounted in a decorative aluminum chassis, that you clip to your RAM slots and provides extra cooling to your Corsair Dominator RAM modules. Now one might be wondering how louder such an apparatus would be, since most 40mm fans aren’t known for their silence. One more concern is the mounting system, which simply clips to the white retention clips for the RAM. So with so many questions on the table, it’s time to install everything and see how well it all works.

For testing we installed the Corsair Dominator 4GB PC2-8500 RAM Kit into the following test bed:

Since we are using 4GB of RAM, and we need it to be both recognized and used by the operating system, we switched our test rig to Windows Vista 64-bit edition. All benchmarks were then run under that OS exclusively, with the intent of seeing if there was a performance boost from the slower 2GB kit normally found in our test bed.