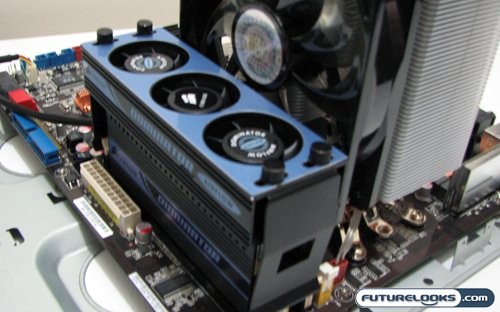 Though I was foreshadowing some doom and gloom a few paragraphs ago, the truth is that the Corsair kit was fairly easy to install once I figured out how it would fit in with our monster cooler of choice. I had to install the RAM into slots 2 and 4, rather then the usual 1 and 3. Alternately I could have swapped the fan to the other side of the cooler which would have given room for the RAM to go in the first two slots. That little bit of forethought might have helped when it came to installing the Corsair AirFlow fans. I could have avoided having the edge of the apparatus up against the CPU fan, which would have reduced some of the noise.

Unfortunately it wouldn’t have prevented the AirFlow apparatus from slipping off the RAM slots. I found that when moving the computer around in a case, if you tilted the motherboard on the backside (which would be the front of a standard ATX case) there was nothing to stop to clips of the AirFlow from sliding around. If the case was at a standstill, and the motherboard was at rest either horizontally or vertically, the cooler didn’t move. But once I started toting it around, and if I tilted the case on it’s front, I found that the cooler would fall off. This is particularly unnerving if you want to take your machine with you ot a Lan Party like Fragapalooza.

To test the Corsair Dominator 4GB PC2-8500 RAM Kit, we had to get a little creative. It’s rather difficult to test the necessity of 4GB of RAM, since so few applications really take advantage of it. Performance was also a bit of a struggle, as there isn’t much difference in raw performance between our test bed RAM and the Corsair kit. Still we gave it a good try, with the likes of SiSoft Sandra 2009 Pro and PCMark Vantage in some synthetic benchmarks.

First out of the gate in our derby of synthetic tests is the software testing suite known as SiSoftware Sandra. Since we are testing memory, it only makes sense to focus on memory tests, and the first test simply probes at the raw bandwidth of the chips parked in the RAM slots. Though only a marginal 3% performance jump was produced by the Corsair RAM over our standard OCZ test set, this is still inline with the differences in chips when both speed and latency are taken into account. If overclocked or ran with tighter timings, the Corsair RAM could easily surprass its own stock results.

Next up in our run of Sandra memory tests is the Latency benchmark. Here we see an even more marginal improvement using the Corsair RAM. This isn’t necessarily a bad thing, as the timings and latency settings on the Corsair RAM are lower than what is pre-programmed into the OCZ kit by default.

The same trend continued into PCMark Vantage, with a minor improvement over the competitors RAM. On that note, I would say it’s time to move onto some real world tests from a couple of games that should put some stress on the memory subsystem.