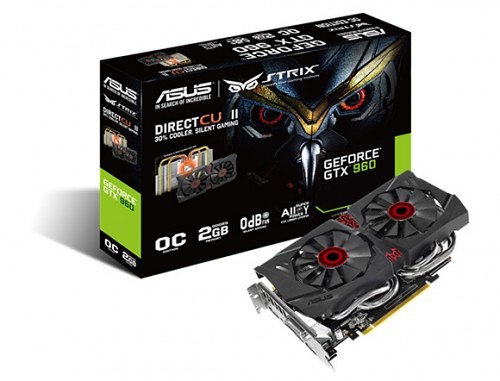 The ASUS Strix brand is a bit of an interesting bird, that is sandwiched between their regular channel products, and their top end Republic of Gamers (ROG) products. They’ve positioned it as sort of a non-tweakers performance gaming brand that gives best possible performance, while providing a “low noise” experience.  With the launch of the NVIDIA GTX 960, ASUS has taken that brand DNA, and have applied it to this latest GPU, with the Strix GTX 960.

The ASUS Strix GTX 960 will feature a cooling system based on their Direct CU II cooling technology, which is boasted to be 30% cooler and 3x quieter than the NVIDIA reference design, even though NVIDIA never put out a reference design. But they have pre-tuned the card with 1291 MHz (1317 MHz boost) overclock, which is higher than the ZOTAC GTX 960 AMP! edition we reported on earlier. It also adds a “odb fan technology” for silent gameplay. Basically, the fans don’t come on till about 55 C. But if you want to take it further with an overclock, you can free up some more MHz with the ASUS GPU Tweak utility, which offers full control of things from clock to memory speeds and more.

A 5 phase power design makes the card a bit more efficient, and last longer under heavy gaming loads. Like most GTX 960s in this initial round, it’ll still need a single 6 pin PCIe power connector.

To appeal to the gaming crowd, ASUS is also bundling in a custom version of XSplit Gamecaster, with a 1 year premium license. And this is included in the MSRP of $214.99 US, with estimated availability of around March 1st, 2015. We’re assuming this is the 2GB GDDR5 version, but there aren’t enough details in their initial press release. Hopefully we’ll know for sure, closer to launch.

Full press release is below.

Silent gaming
The Strix GTX 960 comes with the ASUS-exclusive DirectCU II cooling technology for performance that is 30% cooler and 3X quieter than reference – making the card whisper quiet even when faced with heavy gaming loads.“0dB fan technology” allows a player to enjoy light gaming in complete silence, due to a thermal design that is able to keep GPU temperatures low enough for the fan to stop completely when temps are below 55 Celsius.

The card also features a strong, rigid backplate that helps dissipate heat quickly and provides an extra measure of protection against card damage.

Power up for the win
The Strix GTX 960 has a 5-phase power design that enhances energy efficiency by 15%, provides better load tolerance, and improves overall stability and longevity compared to reference designs. The Strix 960 also uses a single 6-pin power connecter for clean, hassle-free cable management and has a convenient connection indicator LED to ensure successful plug-in.

Real-time monitoring and control with GPU Tweak
The Strix GTX 960 comes with GPU Tweak, an exclusive ASUS tool that enables users to squeeze the very best performance from their graphics card. GPU Tweak provides the ability to finely control GPU speeds, voltages and video memory clock speeds in real time, so overclocking is easy and can be carried out with confidence.

GPU Tweak also includes a customized version of the XSplit Gamecaster streaming tool and a free one-year free XSplit Premium license. XSplit Gamecaster lets users record and share on-screen action over the internet in real time, meaning others can watch live as games are played. Gamers can also easily monitor system stats, such as frame rate, CPU load, temperature, and more, while they play, as well as modify performance settings with a simple click of the GPU Tweak button.

AVAILABILITY & PRICING
The Strix GTX 960 is available now at leading North American resellers for a suggested MSRP of $214.99.  Prices and availability will vary depending upon region.  Additional details and specifications are available at www.asus.com . This offer will be available starting March 1, 2015.