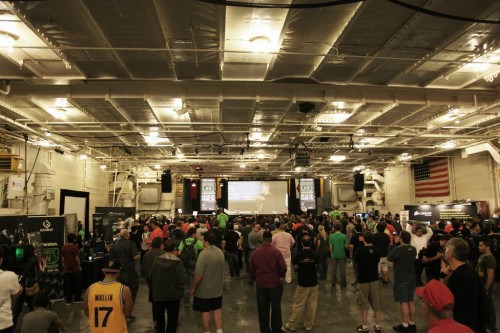 Pavel Chekov once found the “Nuclear Wessels” here in Star Trek IV – The Voyage Home. But this past weekend (October 14 – 16, 2011) in ALAMEDA, CA, nVidia resurrected their GeForceLAN event after a long absence. So it was no surprise that 2011’s event, the first since 2007 and the sixth in history, sold out in just two hours. Any of the 650+ BYOC attendees or countless hundreds of spectators certainly knew why they just had to be there – who wouldn’t want to play this year’s hottest FPS title weeks before release, in all places but a World War II aircraft carrier hangar bay?

Clear The Flight Deck. The Gamers Are Landing. 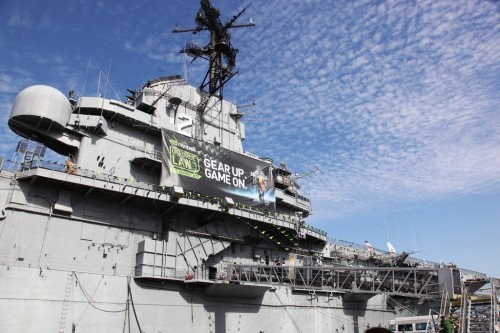 The venue for GeForceLAN was certainly a unique one among gaming events. The USS Hornet was commissioned in 1943 at the height of the Pacific war between Japan and the United States. Although she was extremely lucky at dodging enemy fire – not once was the ship hit by a torpedo, bomb or kamikaze plane – the Hornet was no stranger to action. In fact, she still holds the US Navy record for planes shot down during combat. Later in life, she served in the honourable position of recovery vessel for the first men who walked on the moon – the famous quarantine trailer that Apollo 11 astronauts lived in for 21 days after their landing  is aboard, and many attendees followed in Neil Armstrong’s first footsteps on solid ground, forever marked on the deck between the rows of BYOC attendees.

The Hornet is also well known as being the most haunted ship – though no gamers disappeared under suspicious circumstances during the LAN. 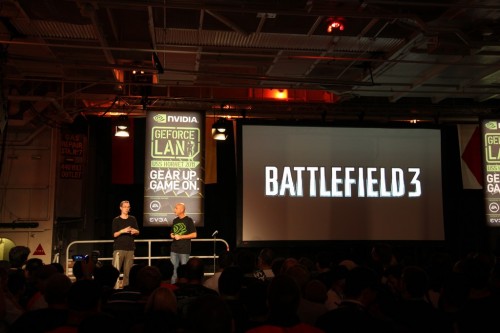 With all of the military history surrounding the event it was no surprise that Battlefield 3 was in the spotlight, and with due cause. For the first time in many years, an action-oriented FPS title has been developed for PC first and with console as an afterthought. If any gamers have been feeling a bit mistreated by series like Call of Duty and their console-oriented servers, online gameplay and graphics, redemption will come in the form of BF3.

Electronic Arts’ DICE division have been hard at work for years on this game and it certainly shows. Even the alpha version that was playable all weekend seemed polished, and it’s clear that the underlying game engine will show up in many other titles in the years to come – it really pushes the limits of what even a well equipped gaming PC can do, so make sure you research some upgrades if you aren’t sure about the abilities of your rig. We’ll have a sneak peek at what to expect from Battlefield 3 in an article early next week. 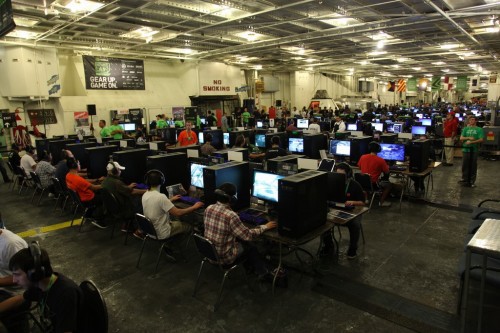 Part of what made GeForceLAN so great was the 600-plus BYOC gamers in attendance. With such a huge crowd, the rows and rows of PCs didn’t seem to have an end. Thanks to the crew from PDXLAN, along with help from ESS, a new company that specializes in running flagship LAN events, there were no problems to speak of. Every attendee we spoke to had nothing but good things to say about their experiences. In fact, many people admitted they did more cheering, demoing and socializing than gaming, but the wee hours of the night when only the BYOC was running probably made up for that – each night there was a “game of the hour” with a selection from titles like Unreal Tournament, Team Fortress 2, Battlefield 1942 and even Minecraft.

Throughout the weekend, Nvidia gave away what seemed like a limitless supply of prizes, and every time one of the sponsors made their way to the main stage to start something like the paper airplane contest or keyboard scramble challenge the crowd would cheer uncontrollably. Though nothing has been confirmed, based on the conversations we had with Nvidia representatives and others involved in organizing the event, it seems highly unlikely that there won’t be a GeForceLAN in 2012 – great news for anyone who is a fan of LAN parties!

nVidia Steps Up The 3D Game 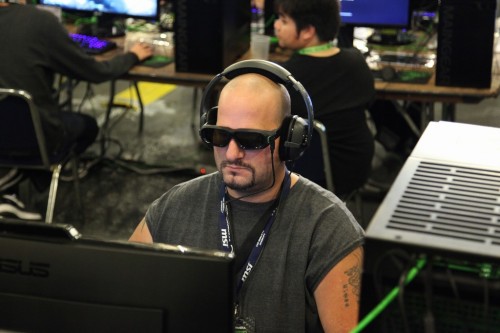 Nvidia also used the event to make a few announcements along with various sponsors. Gone is the old 3D Vision system which has been revised with larger lenses and a more comfortable design for longer gaming sessions. Asus revealed the VG278H, a new 27″ 3D monitor with built-in IR emitter for the 3D Vision 2 glasses. The new LED backlighting on this monitor has a boost mode designed specifically for 3D gaming, addressing complaints from early adopters that the shutter glasses made images too dark to enjoy in certain conditions.

Combined with the bigger lenses and larger screen size (most first-generation 3D monitors are in the 22″ class) the 3D Vision 2 system will provide a more immersive gaming experience for the growing 3D gaming user base. Nvidia expects more and more gamers to adopt the technology, and with the products and games shown at GeForceLAN there’s no reason why the average gamer shouldn’t consider it as their next purchase. Many games – over 600 – are playable with the 3D Vision setup, including older titles released before 3D tech became available. To make the decision even easier, the Asus VG278H will ship bundled with Nvidia’s 3D Vision 2 glasses for an estimated MSRP of $699.

A Good Things Come To An End

The gaming community at large will be happy to know that Nvidia are serious about PC gaming – and they want everyone to know how they feel. The effort that was put in to this event really shows that the company cares about its gaming and PC enthusiast customers and not just about shipping millions of mobile phones, laptops and other digital devices that contain a variety of non-gaming Nvidia products. Many gamers feel that since ATI was acquired by AMD that brand was diluted and slowly assimilated by the parent company, losing much of its gaming history and appeal  (albeit without any performance losses). But when comparing the two in terms of cool factor and brand recognition for gaming, Nvidia is certainly Lamborghini to AMD’s BMW – they both get the job done and they’re both screamingly fast, but one of them just has that certain cool factor that you just can’t resist wanting.

At the end of the weekend it seemed like things were only just getting started – there was just so much going on at GeForceLAN it’s hard to imagine that any one person was able to take it all in. With titles like Battlefield 3 in the mix it seems like PC gaming is not dead – in fact, if you pick up a copy of BF3 next week, invite your die hard console friends over to take a look. We think they will be pleasantly surprised with what they see and experience, especially if you drop them right in to a 64-player map on your new 27″ 3D monitor – just make sure you’re rocking the latest and greatest in video cards to keep every frame smooth and detailed because you won’t want to miss a single one!