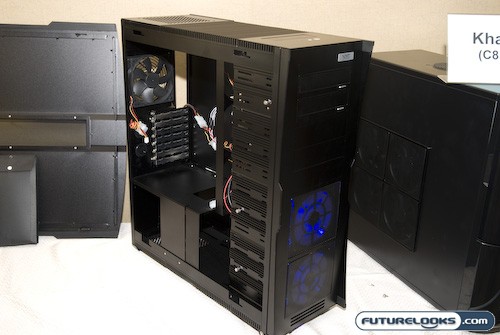 NZXT's Adamas will finally have the follow up that people were looking for. The NZXT. KHAOS shares many of the unique features that made the Adamas unique while addressing the issues that kept the first case from being perfect. Most of the complaints about the Adamas involved the spacing of the drive bays and the amount of room to work with inside the chassis. Rest assured, the NZXT. design team took these criticisms to heart and have built one heckuva case. 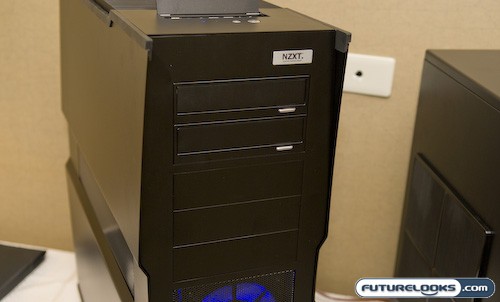 The KHAOS still uses heavy duty aluminum construction like the original Adamas, but I wouldn't stand on top of it and jump up and down. The front panel input also gets moved to the top of the case which cleans up the front of the chassis and allows the ports to be more easily accessed, especially when placed under a desk. The case also features 11 drive bays, two of which are for optical drives. A specially machines panel is provided for them which allows the case to maintain its clean look. 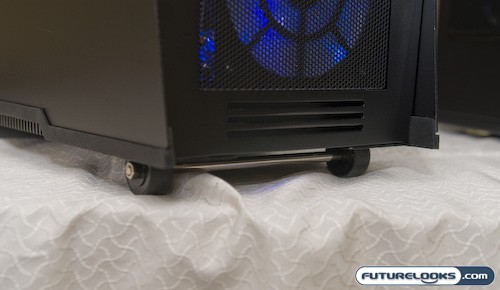 Originally first seen at CES 2008 during the CES 2008 Kick Off Party, the case will feature superior ventilation with liberal use of 120mm and 120mm case fans with two in the front, one in the back, and one exhausting straight up on top. It also features an interior with a shielded power supply compartment which supports dual power supplies and plenty of room for many larger ATX motherboards. Because of the heavy duty/weight heritage, the new case will feature wheels on the front and a handle on the rear to allow it to be easily transported.

The NZXT. KHAOS is already on schedule to release later this month and will retail for a premium gaming chassis price of $399. After feeling up this case for myself, I'd have to say that if you spent the cash, you will feel like you got something for it.

Johnny mentioned that they have always received all sorts of offers to have them design new products that were outside the realm of your standard gaming case. Although he could jump in at anytime, he was adamant about not just rushing into things and finding the right combination of design and manufacturing to do it right. This year, NZXT. took that first step with the launch of their new AVATAR gaming mouse!