The new AVATAR mouse took a very long time to get right according to Johnny. Instead of just taking an off the shelf OEM design and slapping a logo on it, they really put a lot of effort into it, creating a gaming mouse that is distinctly different than anything on the market to date. Since Johnny is also a gamer, he made sure that it could put up and not be shut up. The mouse features a design that resembles an F22 Raptor, but is remarkably comfortable despite the somewhat skinny profile. I did spend about 15 minutes playing with it and all seemed well on the ergonomic side, but I wouldn’t mind seeing what happens after an hour or two before passing judgement. 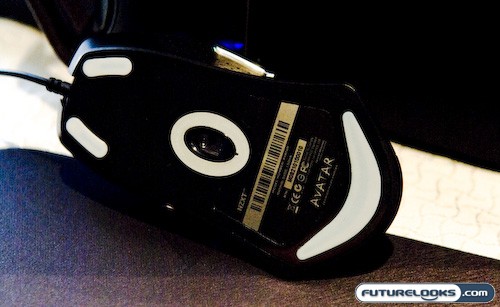 The AVATAR uses an optical sensor that boasts a 2800 dpi resolution. NZXT. chose the optical sensor versus a laser due to the slightly better gaming performance. The mouse does share a lot of similarities to the award winning RAZER gaming mice, but other than what we see on the underbelly, the design is distinctly NZXT. The AVATAR will ship with a software utility that will allow you to customize it to your needs, though you can get most of the performance with just plug and play.

The mouse should be hitting the shelves this August or sooner. We hope to have an advanced sample to test as soon as possible. Hopefully we can get a price closer to launch.

Coming Full Circle with the Return of the Guardian

This year at COMPUTEX 2008, NZXT. announces the return of the case that started it all: The Guardian. 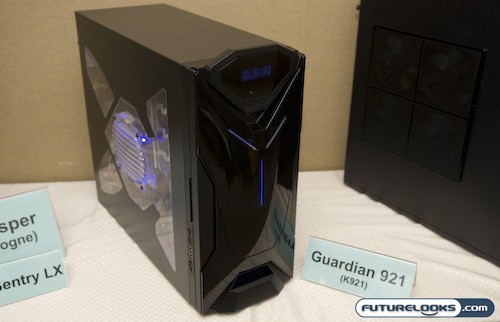 The new Guardian still maintains the 3D front panel, but loses some of what made the first Guardian special which was the robot head. However, the new Guardian is definitely a more refined case with sleeker lines and a better finish quality. It’s like a Guardian for grown ups if you will. Due later this year, the case is definitely sharp looking and should look great under any gamer’s desk.

What Does The Future Hold For NZXT?

Although I couldn’t take any pictures of some of the other items in the room, I can tell you what I remember. NZXT. will be returning to its “Gundam” roots with a case that is unlike anything you’ve ever seen before, making liberal use of coloured plastics to produce a case that will make his manufacturers go “Oh Crap! What has Johnny gone and done again?” The lines of the case totally had me thinking of a high end street bike. Code named “Aero”, this is the case to make you associate the name NZXT. with crazy gaming cases again. There was no ETA on this case, but maybe we’ll see it ready for production next year and hopefully some sneak peeks once the unit is more ready for production.

The other case that was in the room that I was banned from snapping shots of was a short stocky looking mid-tower case that was much wider than normal. It had a large 200mm fan in the front and a unique sideways mounted power supply that sat at the bottom beside the motherboard. Johnny told me that the case was one of the original candidates for the NZXT. Rogue concept, but they decided to go with the current design instead because he was hoping that motherboard manufacturers would have come up with a decent dual card capable mATX form factor board by now. That still hasn’t happened yet, but at least NZXT. has a case waiting.

This new case will feature support for full sized ATX motherboards and a slide out motherboard tray that allows you to pull it straight out without having to remove any of the components, including large aftermarket heatsinks. The case was also finished with a metal mesh, covering the front and then continuing in one piece to the top of the case. Code named “SUMO”, there was no ETA on when this one will hit the market but I was impressed with what I saw.

With a hot new gaming mouse and some cool new products on the horizon, the future definitely looks bright for NZXT. here at COMPUTEX 2008.