I don’t know if you’ve noticed, but I have a thing for little gadgets and other things that allow me to maintain my mobile lifestyle. As a freelance writer, I can work from just about anywhere with a solid Internet connection. However, I do require the right tools for the trade. What was being shown off at CES for this purpose?

Late last year, we took a look at the Luxa2 H1-Touch cell phone holder. This is a premium product with a couple of Swarovski crystals in it. Well, the Thermaltake sub-brand is expanding.

You can now find the Luxa2 H1-Touch is a huge range of colors, including red, blue, yellow, and green. I’m still a fan of the regular old silver metal, but if you prefer a bigger dash of personality, you’ve got it. Also visible in the shot above is the H1-Touch on steroids. That larger unit is designed to work with the Amazon Kindle, but it could prove to be popular when Apple reveals its iSlate tablet later this month. 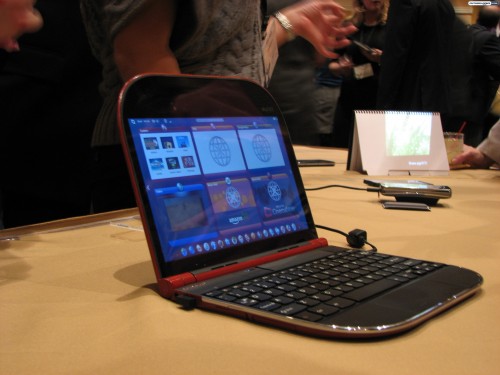 It may not be completely fair to refer to the Lenovo Skylight as a netbook, since it’s a different kind of beast. One of the newer terms being thrown around is the smartbook, because this family of devices fits somewhere between the smartphone and the netbook.

The Lenovo Skylight is remarkably thin and lightweight, yet it felt very solid in my hands. The construction is quite good. Some of its key features include that increasingly hot 1GHz Snapdragon processor, a crisp 10.1-inch screen, Wi-Fi, 3G, and a chiclet-style keyboard.

By the sounds of things, we should expect the Lenovo Skylight to arrive in April with a full retail price of $500. AT&T could be picking it up as well, offering a subsidized price if you sign up for a 3G data plan.

Do you like pocket camcorders like the Flip Video UltraHD? If you’re not as interested in a waterproof camcorder, then you may want to shift your focus over to the Sony Bloggie.

The focus for this product is quite clear: Sony is targeting the rapidly expanding blogging and social networking communities. Also known as the Sony MH5-PM5, this pocket camcorder features a rotating lens, integrated USB connector, direct uploads to YouTube, and full HD video capabilities.

These are all well and good, but you may be more interested in the Sony MH5-PM5K Bloggie kit. This is the same physical unit as the PM5, but the kit tosses in a couple of extras. You get a 4GB memory card and a special 360-degree lens adapter.

What you do is point the lens on the camera straight up into the air, clip on the adapter, and shoot a 360-degree video. It’s like the ultimate in panoramic videography.