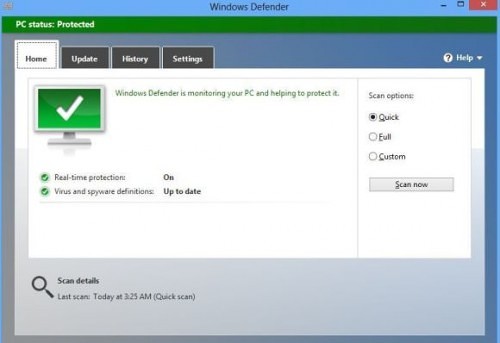 If you’re calling Lenovo’s SuperFish Adware debacle dumb, you’re just being nice. First they claimed it was a technology feature that benefited users. Then they turn tail, and throw the SuperFish Adware under the bus, when the entire Internet turned against them, and for good reason. Whoever thought this was a good idea, is definitely jobless right now.

While this is a huge blackeye for Lenovo, it’s also a huge pain in the ass for Microsoft. As one of Microsoft’s long time partners, this whole thing puts a bad light on Windows as well. It’s like they got tipped off that Lenovo was going to do something stupid, and had something ready to go, just in case this blew up, which it did. And that something is Windows Defender.

Windows Defender is that built in anti-virus protection, that comes free with the OS. And as of the last update, it now has the ability to eradicate the SuperFish Malware/Adware, from any system, especially Lenovo systems.

After you’ve run a full scan, rebooted, and run another scan just to be sure, you can head to this site to confirm that it’s gone.

While FireFox was initially thought to be unaffected by SuperFish, some users have reported that it was infected. You can find detailed instructions at the bottom of this post. Although I’m not sure if I would go as far as saying Microsoft is Aquaman, or that Lenovo is some damsel worth saving. They caused this problem all by themselves.

McAfee has also answered the call to arms, and other packages should be adding support to ride Superfish from systems soon.

While this still doesn’t make Lenovo’s stupidity OK, at least this won’t be an ordeal that most users will need to worry about long term. Lenovo does build really nice notebooks, which include their highly decorated Yoga Pro series. I guess the only way anyone will consider one from now on, is through the Microsoft Store, where only a “Pure Windows Experience” free from bloat, is offered.