As much as we enjoy wireless controllers for our various home consoles, they inevitably bring about the issue of power. Although the official Nintendo Wii instruction manual says that you should stick to alkaline batteries for the Wii Remote, I’ve been perfectly pleased with my use of rechargeable NiMH batteries, each of which coming with a solid 2500 mAh of juice. I don’t have to keep forking out money for new batteries and Mother Nature loves me just a little bit more, because I’m not leeching dangerous chemicals into the landfills through one-use alkalines. 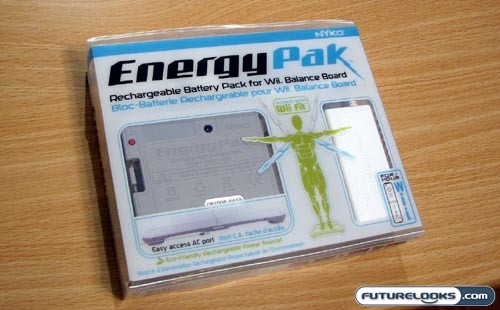 Following the same line of thought, I was going to take the exact same approach when I picked up Wii Fit and the Wii Balance Board. The weight distribution-sensing Wii Balance Board requires four AA batteries to operate, so I thought that I had to invest in another set of NiMH batteries for it. Not so! Nyko was come up with a convenient and affordable way to keep your Wii Balance Board powered up, and thus, a way for you to get back in shape with Wii Fit without worrying about batteries.

Among the major features on the Nyko Energy Pak rechargeable battery pack for the Wii Balance Board, you’ll find:

The key advantage that the Nyko Energy Pak has over conventional rechargeable batteries is that you it can be recharged while it is still being used. If you happen to be in the middle of a Wii Fit session and the Balance Board runs out of juice, you can simply plug the Nyko Energy Pak into an available wall outlet and continue with your exercise routine.

After poking around on the Nyko website and reading up on the provided documentation, I found no specific mention of the mAh rating for the Energy Pak. In this way, it’s hard to make a direct comparison to regular rechargeable AA batteries. Even so, because the Energy Pak can charge while inside the Balance Board, it almost doesn’t matter.

Nyko always does a pretty good job with packaging and the Energy Pak for the Wii Balance Board is no exception. 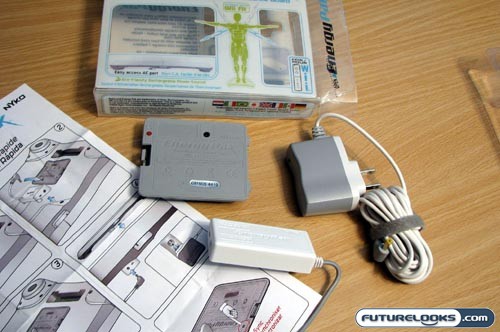 There’s not much in the package that you won’t need. Inside the plastic shell is a plastic tray. Inside the tray is the Energy Pak itself, an AC wall adapter, the AC port relocation adapter (more on this in a moment) and a Quick Start guide. The Quick Start guide is largely comprised of images, so even though the instructions are available in other languages online, you don’t really need them. This is pretty straightforward.

In terms of initial impressions, I’m quite pleased with the build quality of the Energy Pak itself. It’s not anything to write home about, but Nyko has seemingly used some good materials here. The AC adapter looks right at home with the Wii, boasting a gray and white color scheme. The 10-foot power cord is also white, giving you a very Wii-esque appearance. The AC port relocation adapter, however, felt pretty cheap and it didn’t take much to accidentally remove one of the panels. And that’s not the only problem with the relocation adapter. I’ll go more in depth with this in a second.