Although ZALMAN was yet another victim of the CES conspiracy to keep companies from displaying their products at the Venetian and Palazzo Hotels, they managed to keep just enough product around to make our visit interesting. They had a new budget computer chassis, a new value CPU cooler and some great looking GPU coolers. They also brought forth their approach to 3D technology.

The new Z7 Series computer chassis is Zalman’s approach to building a more budget oriented case. Since Zalman’s cases are typically higher end (with a price tag to match), it was interesting to see how the company approached the budget segment. 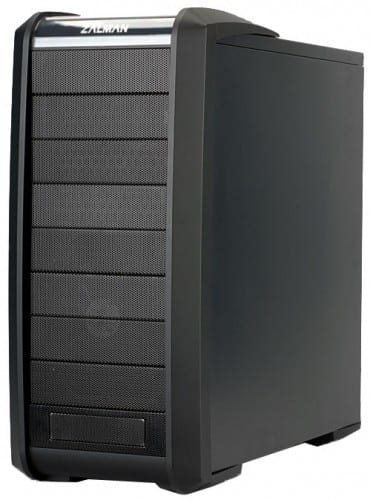 The case features a 120mm fan in the back and one in the front blowing across the HDD cages. There is also another 120mm fan hidden under a mesh sidepanel that slightly protrudes from the case door. The fan on the sidepanel is adjustable and the speed of the fan is indicated by an LED that increases in brightness with the speed of the fan. You can also add a second 120mm fan if you wish and all of the fans are equipped with blue LEDs.

The case also features dust filters in the front panel and supports performance CPU coolers up to 162mm tall. A quick inspection of the case revealed the use of heavy gauge steel, all rolled edges, and high quality fit and finish. It even supports water cooling with two grommeted hose outlets and is finished off with a tasteful blue glowing ZALMAN logo at the top of the front panel. Hard to believe all of this will only cost around $79.99US at launch. 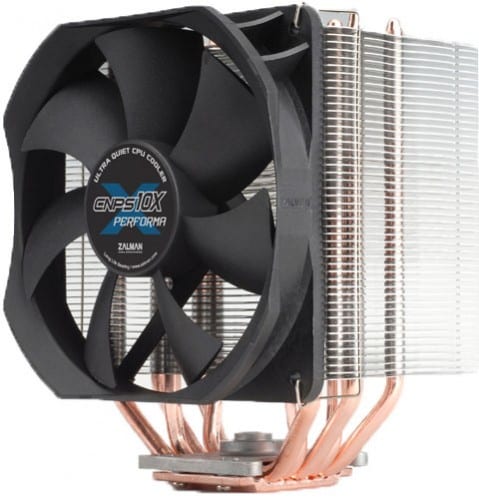 ZALMAN is known for some pretty elegant looking CPU coolers. Their new CPU cooler is taking a cue from the Z7 series chassis by addressing budget users. It uses aluminum fins that are rippled for better airflow and borrows the high end backplate from their higher end Flex series. Price is kept low by speccing only one 120mm PWM fan but a second one can be added easily.

The finish is also more basic to keep the price low (around the $45 range) and is compatible with cases 180mm or wider. It supports all current INTEL and AMD CPUs. 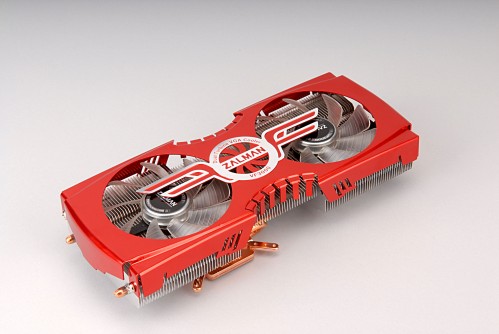 ZALMAN is also releasing some very high quality air coolers for both nVidia (VF3000N) and ATI (VF3000A) GPU equipped video cards. The attractive solutions features dual 92mm fans and are mated to copper heat pipes and aluminum fins. A fan controller allows custom cooling adjustment for noise and performance. No pricing was mentioned during our meeting.

ZALMAN was also showing off their concept for 3D immersion. Unlike other systems that use shutter glasses, this one uses standard 3D glasses like the ones you used to watch AVATAR 3D. After looking through a ton of demos, I was totally impressed with the performance. Best yet, it didn’t make me nauseous like some other systems on the market. It’s hard to show you what it looks like so you’ll have to take my word for it.

The system was being shown off with a special 32 inch monitor with a resolution of 1920 x 1080, but no price has been set yet. This unit will join the company’s current 22 inch model (ZM-M220W).

Keep an eye on our YouTube Channel and the comeback often as we continue to roll out our coverage of CES 2010 over the next couple days. More pictures of these products on the next page.