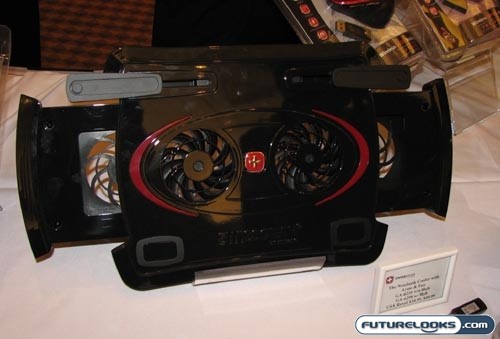 Keeping your laptop nice and cool can be quite a bit of a challenge, but it gets even harder to accomplish when you start looking at the bigger units in the market, especially those 19-inch behemoths that can’t seem to fit on any stand on the market. Fear not, monster notebook owners, because SwissGear has come to the rescue with a notebook cooler that spreads its wings into the upper echelons of laptop size.

The GA-6216 and the GA-6298 Notebook Coolers from SwissGear — the only difference between the two is that the latter comes with a USB hub, whereas the former lacks this functionality — have these funky arms that jut out the sides, effectively letting you expand into the larger end of laptops. There are two active fans in the center of the device, feeding cool air into the bottom of your portable computer.

When not in use, these extendable arms can retract into the glossy red body, making the SwissGear Notebook Cooler reasonably portable for anyone who happens to be on the road (say, at a trade show in Las Vegas or something). At the top of the laptop cooler is the pop-up USB hub that you’ll find on the SwissGear GA-6298. 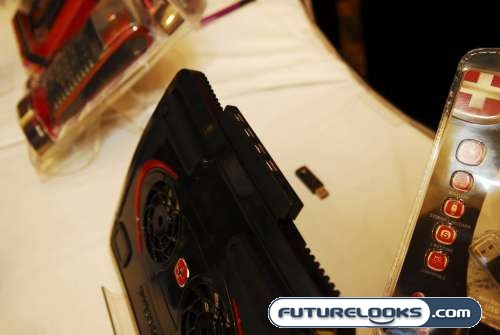 In terms of pricing, the base SwissGear GA-6216 Notebook Cooler with Arms & Fan retails for $34.99, whereas the GA-6298 goes for a penny shy of $50. A variation is also available in pink for the ladies.

I’m generally been pleased with the XtremeMac line of iPod accessories, but the first Luna speaker dock didn’t fare so well in our first review. I guess the folks at XtremeMac were listening, because the company representative said that they’ve implemented all sorts of upgrades and updates into its aptly-named successor, the XtremeMac Luna X2.

You get basic stuff like a wireless remote, iPod speaker dock, and monochrome display on the front, but they’re quick to point out that this device is more than “just an alarm clock”; it is also a “high-performance room audio system designed to provide you with the perfect sleeping and waking environments.” Other notables include two full-range precious speakers, full iPod connectivity, AM/FM radio, and an auxiliary line-in jack. 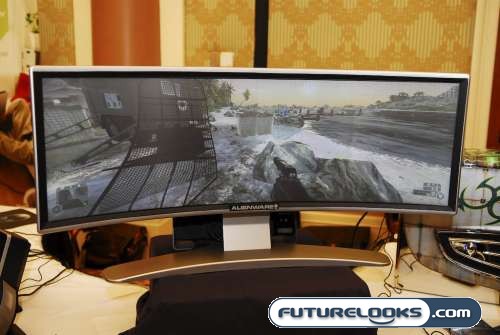 Even though Alienware is technically owned by Dell these days, the firm is still keeping with its hardcore gaming roots, providing the most enthusiastic of computer game players with the absolute best equipment imaginable. One of the more impressive products at CES 2008’s Digital Experience had to be the formidable Alienware Curve Display, which you could say is two 19-inch LCDs shoved next to one another.

As its preliminary name implies, the Curve Display has a definite curvature to it. The idea is that the gamer (or photo editor, as the case may be), is full ensconced in their virtual environment. If you’re interested in resolution, you’ll be happy to hear that this technology fully supports a full 2800 x 900 resolution, which is pretty much like putting two 1440 x 900 resolution displays next to one another. 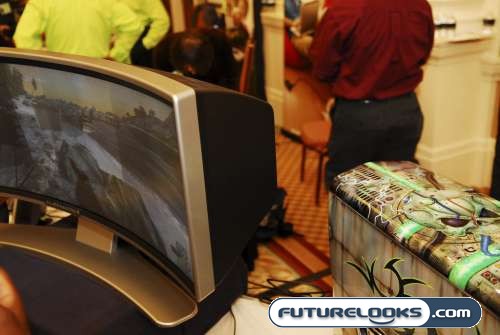 The technology behind this glorious display is DLP projection, but it has also been paired with LED lighting to give you a brighter screen and an overall more enjoyable experience. The good news is that this gaming-centric monitor should be available on the market in the second half of this year, but Alienware has yet to come up with any sort of pricing. Let’s just say that if you have to ask about price, you probably don’t want this monitor.