We see a lot of competition in the world of computers and technology. Intel vs. AMD, Samsung vs. Apple, Gigabyte vs. Asus… the list goes on and on. At the same time, we’ve also seen that when companies work together on projects, the end product can be that much better, even if it comes from the unlikeliest of alliances.

Smashing the Franchises Together

One of the most hotly anticipated video games of the fall is Super Smash Bros. for 3DS and Wii U. You can play it like a casual fighting game with friends or you’ve got the tournament scene for some really high level competition. In any case, Smash Bros. represents one of these strange partnerships that we couldn’t have possibly predicted during the console wars of the 1990s and into the early 21st century.

Who would have thought that Nintendo would have a video game that featured Sega’s Sonic the Hedgehog and Namco’s Pac-Man? These three gaming companies were once bitter rivals, but their most iconic characters can now co-exist on the same battle stage. This is a fanboy’s wet dream come true and it makes for a game that’s even better than if it only featured Nintendo’s stable of combatants. Well, pitting Link against Samus, Pikachu and the Duck Hunt Dog is still pretty epic.

Another prime example is the upcoming generation of smart TVs from LG. What’s cool is that they are adapting webOS to suit the bigger screen of the living room. You might remember how webOS was what powered the Palm Pre smartphone and how Palm (and webOS) was later acquired by HP. While LG and HP may compete against one another in other segments, they can be great partners for the smart TV.

The Nook Guardian of the Galaxy 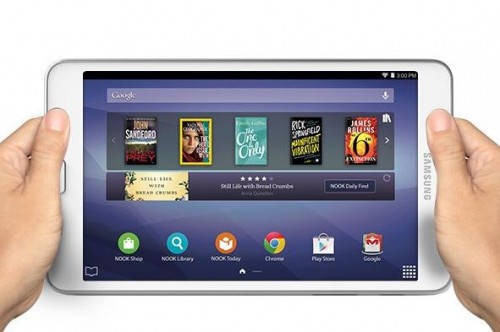 They say that you should focus on your strengths and outsource the rest. Perhaps that’s why the Samsung Galaxy Nook Tab has come into existence. Announced last month, this new tablet takes the hardware and software expertise of Samsung and marries it with the e-reading expertise of Barnes & Noble, all while taking advantage of the software and infrastructure prowess of Google with the Android operating system.

You see, Barnes and Noble isn’t really in the business of developing software and hardware, but it is in the business of providing customers with a good variety of content. That’s why the Galaxy Tab 4 NOOK comes with over $200 of free content to get you started, including books, magazines and TV shows. All the while, Samsung and Google are able to provide you with all the modern conveniences of a contemporary touchscreen tablet.

Competition is good for the consumer. It encourages innovation and product differentiation. It provides us with choice. At the same time, we certainly shouldn’t downplay the value of cooperation either. If you build your PC, then you’re already aware of this. You grab your case from one company, your motherboard from another, you graphics card from yet another, and then you look to someone else for storage and memory. When you put all of those pieces together, it’s magic and the sum is definitely greater than the sum of its parts.