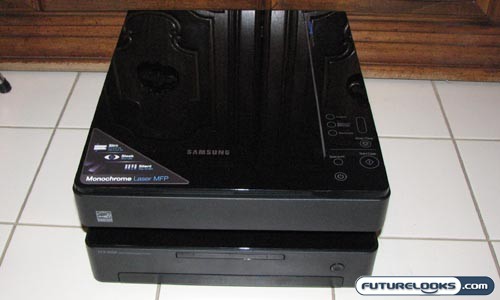 We like pretty things. We like shiny things. Most components of our digital lifestyle have received some rather extreme makeovers. I need not remind you of the ancient “Zack Morris” cell phones of old, comparing them to the sleek and shiny RAZRs and iPhones of today. The same thing can be said about computer mice, computer towers, LCD monitors these days. You name it and chances are that there are plenty of aesthetically pleasing options for you to consider. The one area in our digital lives that has yet to be affected by our need for eye candy is the printer.

When you look at just about every company that manufactures printers for corporate or consumer use, the resulting product is usually a plain beige box that shoots out pieces of paper with some ink or toner on it. Look at most of the printers being offered by Canon, Dell, and HP, and you’ll quickly see how generic they all look. Samsung wants to change that. 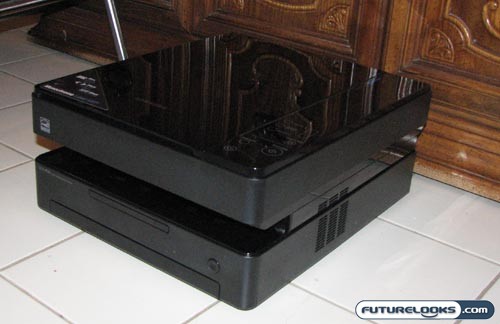 Prior to hearing about the Samsung SCX-4500 multifunction printer, I couldn’t even fathom what a fashionable printer would look like. After all, printers are thought of — up until now, that is — as purely utilitarian devices. They’re there, because we need them and not because they look good. The Samsung SCX-4500 completely throws this mindset out the window.

A Printer Can Be Eye Candy Too

Instead of a boring gray or beige complexion, the top cover of the Samsung SCX-4500 laser multifunction printer gets dressed up in an absolutely gorgeous piano black finish. It has the same glossy reflection that you’d find on the company’s MP3 players and LCD monitors. Unfortunately (or fortunately), this glossy finish does not extend down the sides of the printer, nor will you find any reflective goodness running down the front. Instead, these are all covered in matte black. 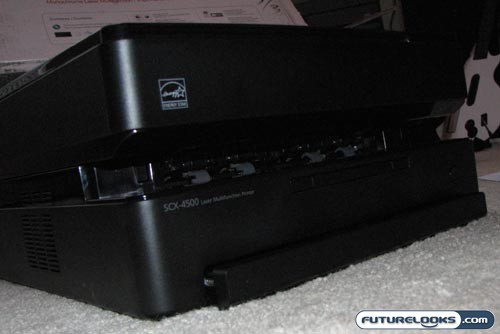 But that’s not where the attractiveness ends. Much like the Samsung YP-K5 (or recently reviewed YP-T9) portable MP3 player, this multifunction laser printer is equipped with touch-sensitive controls and a set of funky blue LEDs. What this means is that the “display” is typically hidden behind the piano black finish, nearly invisible to the naked eye when not in use. It is only when the blue lights are turned on by your touch that you can see what’s going on.

I’m personally not a fan of touch sensitive controls, although they add to the svelte appearance of this machine. I prefer standard buttons if only for the tactile feedback and relatively level of responsiveness. That said, if you’re accustomed to devices like the Apple iPhone, then you should have no qualms about using touch-sensitive controls on the SCX-4500. 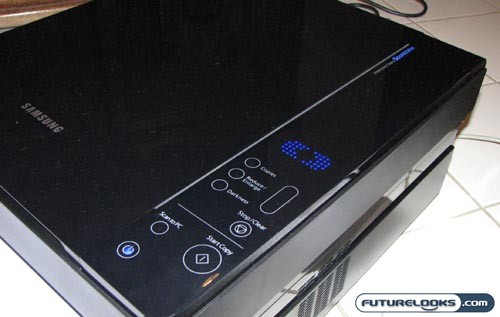 Don’t get me wrong. The piano black finish, blue lights, and touch sensitive controls are very pleasing to the eye. I just don’t think that they’re the most functional and user friendly way to go. We all know how much of a fingerprint magnet that these glossy finishes inevitably are. Be sure to keep a buffing cloth close at hand.