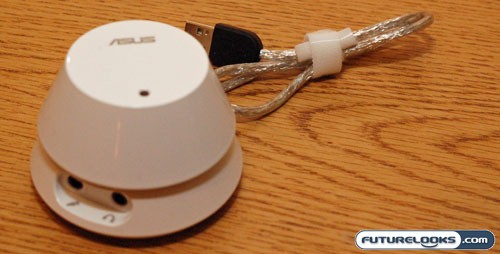 Don’t let the size of the Xonar U1 fool you.  It may be small, but there’s enough weight there to keep it from blowing off the desk.  This is due to the Xonar U1’s use of metal in its construction.  Both the top piece, which acts as a volume dial when you turn it, and mute button when you push it down, and the bottom piece are constructed of metal. A rubber base keeps the device from sliding around while you’re bopping away to your tunes.  I really liked the inline velcro tie that they attached to the short USB cable, making it easy to bundle up and stow in a laptop bag. I also discovered that if you hit it with a spoon, it makes one heckuva loud “ring”. This could be good for getting the attention of the waittress to come warm up that coffee cup. 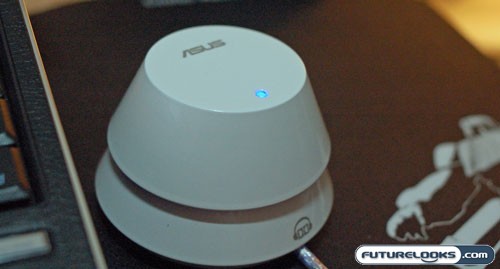 Installing the Xonar U1 pretty much only involves plugging in the USB cable and away you go.  The LED on top of the device will glow solid blue once it is ready to go. The included software only supports Windows XP and Vista in both 32 bit and 64 bit flavours so if you want to take advantage of the additional features, you’re out of luck if you’re a Mac user. However, even without the software installed, the device works just fine as an external, two channel, USB audio device using generic drivers, so in a pinch, you can plug it in anywhere.

The software and drivers install easily and once finished, you’ll be greeted with lots of easy to use customizable features that are well laid out and easy to access. Even if you don’t like fluffy software, I recommend giving it a chance and playing around with it. It also enables all the additional cool support for the whole suite of Dolby features as well as EAX and DirectSound.

Hitting the menu button on the control panel flips up to reveal even more features to monkey around with. You’ll find different sound effects to mess with including a KARAOKE mode if you get lonely on the road and want to lock yourself in the room with a six pack. It does do a pretty good job removing Britney from her music.