Which Ones To Wear Today 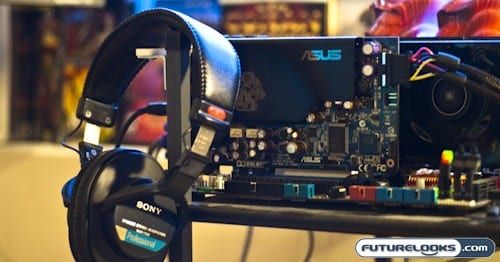 I tested the ASUS Essence STX Headphone Amp Card with three sets of headphones. First up was my trusty and comfortable SONY MDR-7506’s, which are industry standard for broadcast and known for lots of fat bass on the bottom. They also produce a fairly warm sound that’s easy to listen to on most sources, though not particularly super detailed. Next, I used the recently reviewed Futuresonics Atrios buds to see how smaller headphones did with a properly driven source like this sound card.

Finally, I listened some more using a set of Ultrasone HFI-680 Headphones which have a nice wide open sound stage, good separation of instruments and plenty of sparkle in the mids and highs. They don’t have the bass that the aforementioned headphones have though but do have a natural sounding surround effect.

Starting with music, I went with Norah Jone’s – Come Away With Me, which I ripped tracks at the highest quality WMA format from. From the first few seconds, I was impressed with just how much authority the bottom end was driven out on all headphones. Highs were crystal clear and mids were warm and inviting all around. They were a bit darker of course on the Atrios but the MDR-7506’s really ate that up revealing quite a bit more detail than I’ve heard from them on my other cards like the Xonar D2 and the X-Fi XtremeMusic.

The big 3D soundstage on the Ultrasones just took on a life that wasn’t there before. Norah’s raspy vocals really bloomed and I started to feel myself in the room with the band. The bottom end, typically weaker on the other cards with this headphone, became much beefier as result of the proper power supplied by the Essence STX. This resulted in me quickly rambling through my whole music collection for hours, from Linkin Park to Diana Krall to Kanye West. I haven’t enjoyed music like this (especially on a PC) in such a long time.

The MDR-7506’s really came to life on bass heavy music. With such a great bottom end authority, I was almost afraid of overextending the drivers. There is a crossover adjustment in the settings just in case you do match the card up with headphones that just can’t keep up. This came in handy with the smaller Atrios headphones.

Lower quality sources like streaming audio also became quite a bit more listenable due to the level of warmth injected by the Essence STX. This made the typically flat sounding streams a little more three dimensional. They weren’t great to begin with, but were made more enjoyable on all the headphones. Even movies were extremely enjoyable for a non surround sound representation, especially through the Ultrasone’s because they do have technology inside that gives you a natural surround effect. I did prefer the MDR-7506’s overall because of the extra bass for the action flicks that I love like “The Matrix” and “Saving Private Ryan”.

In gaming, the card’s support for Direct3D and EAX 2.0 offers decent gaming performance for most titles that I played like Command & Conquer 3, UT, Portal and even a bit of MMORPG with Age of Conan. The sound was the best that I’ve heard, quality wise, but I almost felt like I was wasting it here, even though it was by no means, unenjoyable. Quite the opposite really.

One thing that annoys me most about PC audio is just how noisy and dirty sounding it is, especially with good headphones. The most startling thing about the ASUS Xonar Essence STX Headphone Amp Card was just how dark the background was. There was absolutely no backgound noise and I had to double check to make sure that my levels were set correctly. All I heard was silence from the Essence STX and in the harsh realm of a PC, this is a great achievement in itself.

The other part that blew me away was just how truly enjoyable the audio experience was. Typically, I get products that boast all these great specs (some not cheap), but I always get deflated when I can hardly hear the difference. The Essence STX is not one of these products and it really delivers. I applaud Ives and his team of headphone nuts for stepping up and making what they promised come true. The essence of music is what this card was designed to deliver and it delivered it with strong well driven bass notes that bloomed, warm and detailed mids and crystal highs with all my headphones. They really brought out the best in anything I threw at it.

At around $200 US, this card is definitely not for everyone. However, anyone that enjoys music, or who wants to enjoy it all over again should be hitting the stores for this. It’s truly a high performance product.