You might know Penny Arcade best for its popular webcomic, but they also happen to organize a couple of major events each year. Some months back, there was the Penny Arcade Expo East (PAX East) and just this past weekend, I was able to attend the Penny Arcade Prime (PAX Prime) Expo. What can you expect from such an event? Let’s find out!

A Whirlwind of Video Games and More!

At Penny Arcade Expo, you get a trade show element where various companies show off their latest and upcoming games. You get many different discussion panels covering a range of topics related to gaming. You get the marketplace to buy some collectibles and other merchandise. And then there are gaming tournaments, tabletop games, cosplay, card games, and a whole lot of other stuff, not to mention a couple of concerts to boot. It’s a very busy weekend, but naturally, the “trade show” aspect isn’t as big as what you’d get at something like E3 or the Tokyo Game Show.

Attending a Couple of Panels

Personally, I think one of the strongest elements of PAX Prime 2010, outside of checking out the people dressed up as their favorite game characters, is the selection of panels. They gather several experts and other industry folks to cover topics. At any time, there are between three and six panels going on. 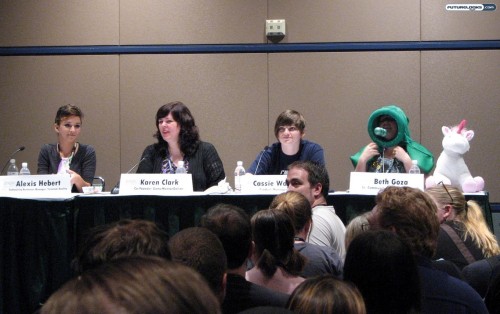 Stretching across three days and about ten hours each day, that makes up a lot of panels. One of my favorite panels was the Myth of the Gamer Girl. They candidly discussed the state of the industry, both from the development and the consumer points of view.

This is clearly related to the question we asked some time back: Where are the women in the video games industry?

Panelist Cassie Wallender is a product manager at MySpace and she made a very apt observation relating to groups like the Frag Dolls and the PMS Clan. It’s good that the women are rallying together, but this can perpetuate the segregation from the larger gaming community. As she put it, “Let’s make an all-girls club. Oh wait. Why are we so separate from the boys?”

Another panel I attended was the one run by OverClocked Remix. They are a video game music community best known for remixing all sorts of classic video game soundtracks. This goes well beyond the musical interests of Rock Band, since their remixes are composed to “re-imagine” our nostalgic favorites.

You may know their work, for instance, from the official soundtrack to Super Street Fighter II Turbo HD Remix on Xbox Live Arcade and PlayStation Network. All of their tracks are available for free through the OCRemix website, including some upcoming albums.