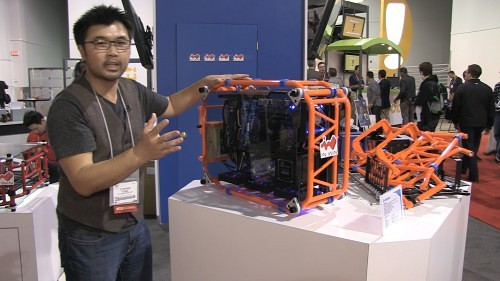 The third and final instalment of our CES 2013 coverage from Las Vegas is upon us and it features even more stuff for people who like computers! And of course, it’s in glorious 1080p HD and nice and beefy so that you can lose yourself for 20+ minutes as you make a new wish list for your next system build. Featured in this video are new products from NZXT, InWin, ANTEC, ADATA, Rosewill and Silverstone!

Sit back, relax, grab your favourite beverage (alcoholic or non-alcoholic), or snack, and enjoy…

For those of you that want to skip ahead, here are the time codes for each company…

NZXT. (00:29) – Rob Teller from NZXT walks us through the brand new Phantom 630. This new case, although related to the already fairly new Phantom 820 in name, is actually a completely re-engineered chassis with many improvements. Also shown off were the new HALE90V2 power supplies that have more than just a white paint job to boast about this time around.

InWin (9:20)  – The most surprising thing on the show floor was the new D-Frame chassis from In-Win. We’ve seen a lot of open air cases from many companies over the years, but none that looked anything like this. It looks like a cross between a high end coffee table that you didn’t buy from IKEA and a Ducati street bike with its tubular aluminum frame. Absolutely stunning!

ANTEC (10:39) – We catch up with everyone’s favourite Asian Uncle, Han from ANTEC, to see what they were up to. A new military theme for the 1100 chassis was unveiled and a new chassis that provides budget users with something cool and military was also announced in a case called the GX700 for a mere $59.50.

ADATA (16:21) – Although they aren’t as well known in North America, ADATA is determined to be a name in enthusiast products. They showed us a new mSATA SSD that features up to 384GBs of storage and a SATA3 interface. Normally, you’ll see SATA2 versions in larger capacities so this is somewhat unique. They also showed off a new 2600MHz enthusiast memory series under their XPG V2 line.

Rosewill (16:59) – Also charging hard for the hearts and minds of enthusiasts is Rosewill. They showed off an updated white version of their new Throne chassis and released a new dual LED RK9xxx series mechanical keyboard.

Silverstone (18:42) – Finally, Silverstone takes us home with the final update before shipping on their new FT04 and RV04 enclosures. We also see a new concept chassis called the “Mammoth”. HTPC enthusiasts should be pleased with the new ML05 and LAN gamers should fall in love with the new SG10.

Thanks again for following our CES 2013 coverage! We really enjoyed bringing this to you and we look forward to bringing you more coverage of cool computer related events in 2013. Please enjoy the photo gallery below and make sure you come back often for more stuff for people who like computers!