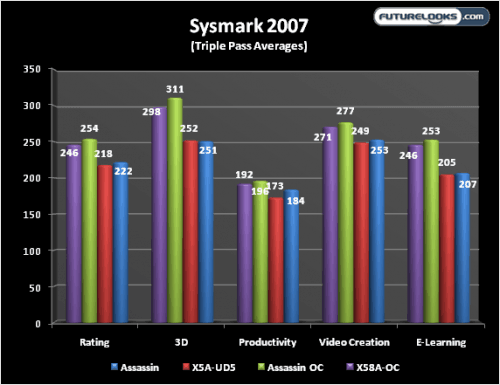 While the results appear to be very close at stock between the boards, there is quite a bit more work going on behind the scenes. No doubt the extra features help it pull ahead. Overclocking performance really favored the G1 Assassin as it was able to pull ahead once pushed. 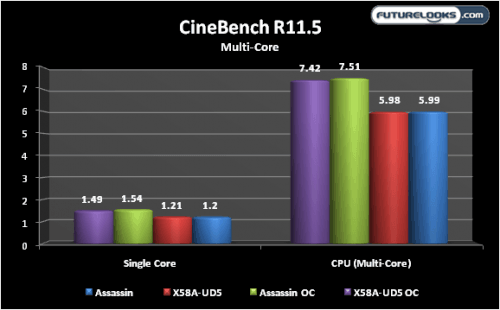 The rendering performance using both single and all cores on Cinebench revealed just a few more points in favour of the G1 Assassin. Overclocking again tips the numbers in favor of this motherboard. Otherwise, stock performance won’t dazzle you over the UD5. 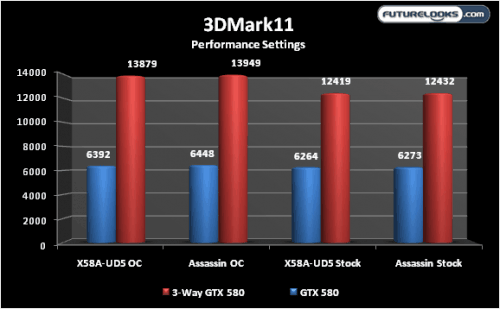 Graphics performance under Futuremark’s latest benchmark is impressive. There are excellent scores all around for both platforms under the “Performance” preset which tests at 1280×720.For whatever reason possibly due to BIOS tuning, the G1 Assassin was just a bit more aggressive especially when overclocking the system.

The demo is a great free program for benchmarking DX9, DX10, and DX11 video cards. In this round, we’re just testing DX11 performance since that’s what this test system is designed to handle. 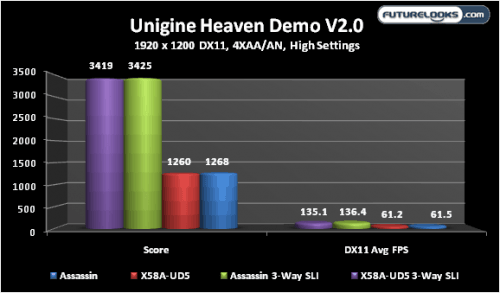 Frame rates are extremely close even after redundant testing. There’s only a slight gain in favor of the G1 Assassin. This is also the first time I’ve ever seen the demo run so fluid and clean. Extreme maxed settings were roughly at 70 frames per second which for all intents and purpose yields a playable experience.

I really had to take a DirectX 9 Game of the Year for a spin in SLI. Sure, it’s overkill. But, it looks really good when you have the hardware to crank it up! 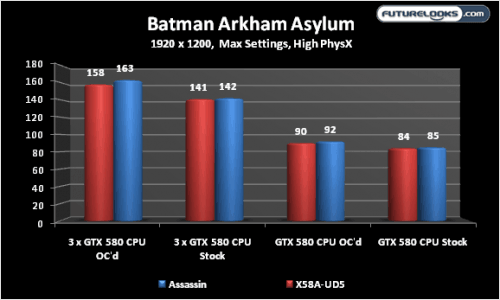 The Assassin outpaced the UD5 when overclocked. The upper end stable clocks were just too much for the UD5. Otherwise, stock frame rates were extremely close.