One of the handy tools in the UEFI BIOS is the super easy screen capture. If you are having issues tuning up your Maximus IV Extreme, you can share them easily with another ROG tuner and compare notes. In the Advanced tab, you’ll find everything needed to set up your peripherals, memory, expansion, and overclock. The offset voltage was set to a limit of 1.52 volts when possible.

TurboV is more intuitive than ever. Users will find every voltage, VRM frequency, Load Line Calibration (LLC), and automated overclock option to overclock for the CPU and memory. With the right manual tweaks and some patience, the Core i7-2600K 3.3GHz reached 4.6GHz quickly enough. The BIOS has this very same automated option as well if you are adverse to using additional software. When letting TurboV find the maximum overclock, it took about 20 minutes to find 4.8GHz with voltage reaching close to 1.5 volts. 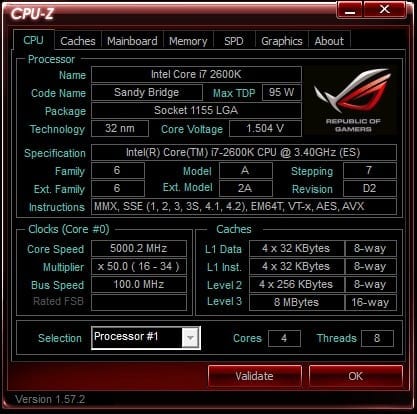 However, manually overclocking via the BIOS is a pleasure especially after disabling Intel Thermal Monitoring. Oddly, C1E states didn’t seem to matter. Using offset CPU VCore and PLL voltages, the Maximus IV Extreme found 5GHz hiding underneath my 2600K. With more voltage under more stringent cooling, my chip will probably go higher given the voltage. The board also carried the HyperX Genesis 2133MHz higher but couldn’t quite top 2240MHz without cranking up the voltage beyond safe QPI levels.

While our overclocking results went extremely well, keep in mind your overclock results will vary depending on your 2600K CPU. Not all K-SKUs can use a 50X multiplier, or may require much more than 1.5 volts to get there as one of my 2500K chips has shown. It needs 1.55 just to motivate it along.

As per standard operating procedures, the overclocked system has to pass three iterations of Sysmark 2007 or we don’t count it as stable. That said, the suite consists of programs that test the entire platform’s features and sub-systems under real world applications. The benchmarks include: Sysmark 2007, CineBench R11.5, 3DMark11, RightMarkAudio Analyzer, input/output performance, power consumption, and quality control.

Power Consumption was measured using a power meter from the outlet. Quality Control was done utilizing both our senses and a laser thermometer. We’re looking for EMF, or noises, as well as any unusual hot spots compared to previous P67 platforms. 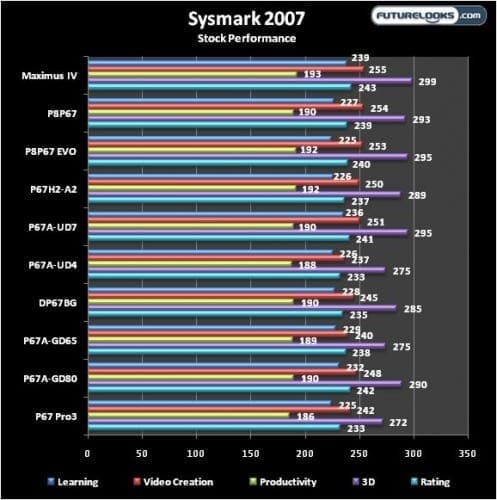 Stock scores say a lot about the Maximum IV Extreme’s potential not only as a Republic of Gamer’s platform, but to serve as a admirable performer for running some professional applications as well even with a standard platter OS drive. However, by adding a Kingston V+100 SSD, the board increased productivity to 285 which helped achieve a final Rating of 274. This is comparable to Z68 scores as well when running Intel Smart Response and an SSD. 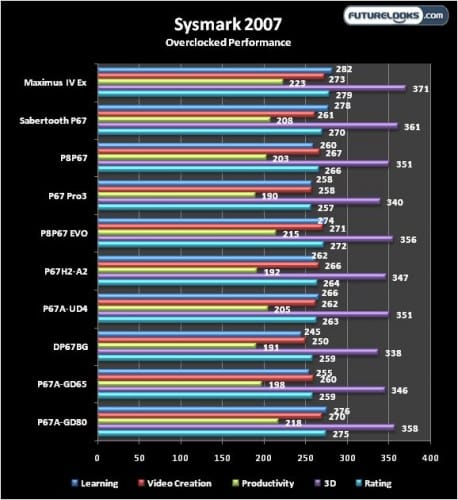 The trend continues in a huge way even when overclocked to its highest stable frequency. Remember, each platform has to finish running three iterations or else the system isn’t viably stable. Again, users can expect noticeably higher scores when adding a capable SSD. 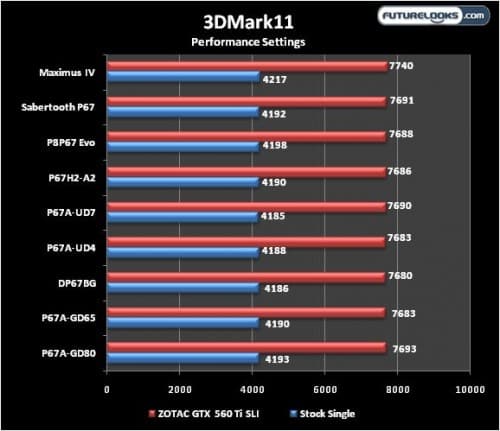 Whether it’s the PLX controller or high performance tuning, the Maximus IV Extreme easily pulled away from the pack using the best possible system tuning across the entire pack. It should also be indicative in a decent intensive 3D title. Let’s check that next.

This game can bring many a video card to its knees. High performance GPUs are best for our 1920 x 1200 maximum setting test. Let’s see how the Max IV Ex handles single and dual video card configurations. 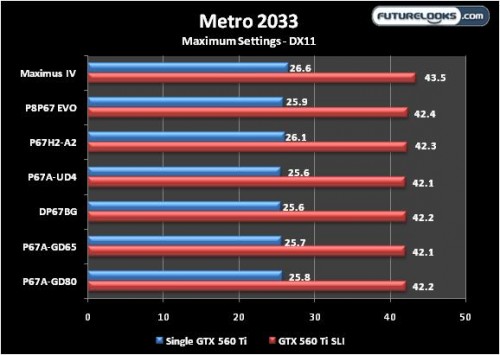 The results might seem minimal. However, the slight improvements to the Max IV Ex give it an edge that the rest of the platforms don’t quite seem to have. Honestly, it should always run faster given the extra PLX controllers partly featured in the premium the ROG board carries. 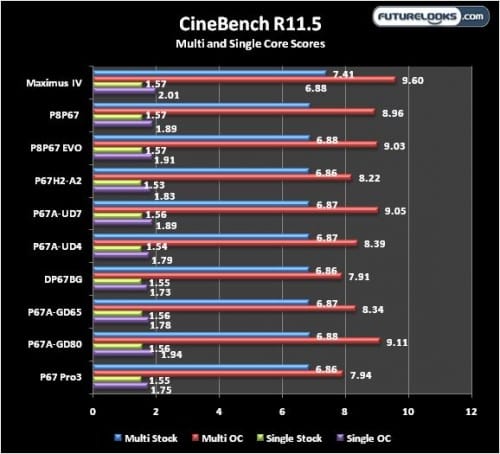 Need we say much here? It’s fast, highly tuned, and ready to blast out of the gate at stock frequencies. When overclocked, the ROG board is a completely new animal. The crazy thing is that there’s still room to go higher. We just can’t bring ourselves to risk our favorite 2600K processor.