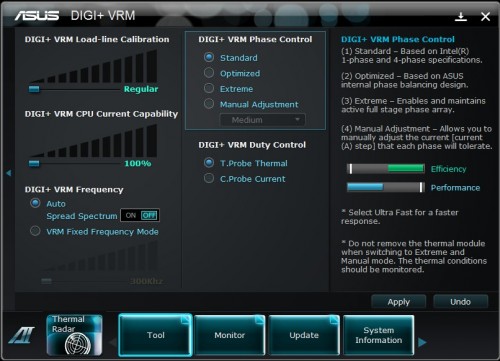 ASUS AI Suite II provides several options for updating your BIOS by managing the board’s DIGI+VRM, voltage tweaks, monitor temps, fan speeds, and voltages. If you install TurboV, you can play with the BCLK (Bus Clock), multiplier, and other voltage settings. You’ll also be able to access Thermal Radar for monitoring the 12 sensors built in to the various major component areas of the motherboard. We’ll cover that in the Thermal Armor section later.

The UEFI BIOS is present across all of ASUS’ motherboard series. Most of the settings are very similar with the exception of a JPEG capture feature in the upper echelon motherboards. Still, the basic layout is the same with an easy to use entry level screen featuring three settings for quick, instant speed. 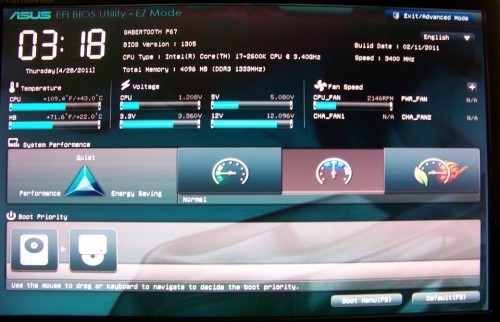 If you want more overclocking performance, or BIOS options, you’ll have to access the advanced settings tab. Here, you can manually adjust smaller incremental frequencies and voltages depending on the overclock you want. Those new to overclocking will love the auto tuning option as it will automatically find the best overclock your system can handle. It’ll take about 20 minutes or so, but at least you don’t have to figure it out. New users will find this very handy in saving time and possibly the headache diagnosing an overclock gone wrong. 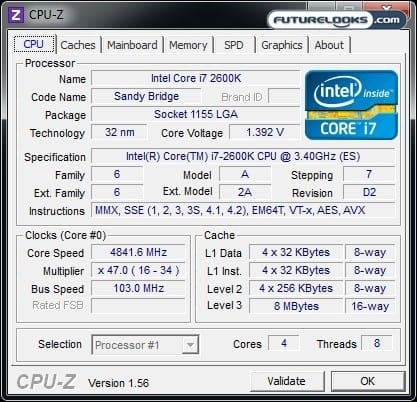 Once you’re in the OC-Zone, the Sabertooth is eager to push higher. The trick with these platforms is to use the CPU “offset” voltages. At 1.45 volts, with offset voltage, our Core i7-2600K struck 4.84GHz. With more extreme tweaking, it’s very possible the system could hit 5GHz. Personally, the worry free 24-7 sweet spot for this particular system is about 4.74GHz with slightly lower dishes.

As per standard operating procedures, the overclocked system has to pass three iterations of Sysmark 2007 or we don’t count it as stable. That said, the suite consists of programs that test the entire platform’s features and sub-systems under real world applications. The benchmarks include: Sysmark 2007, CineBench R11.5, 3DMark11, RightMarkAudio Analyzer, input/output performance, power consumption, and quality control.

Power Consumption was measured using a power meter from the outlet. Quality Control was done utilizing both our senses and a laser thermometer. We’re looking for EMF, or noises, as well as any unusual hot spots compared to previous P67 platforms. 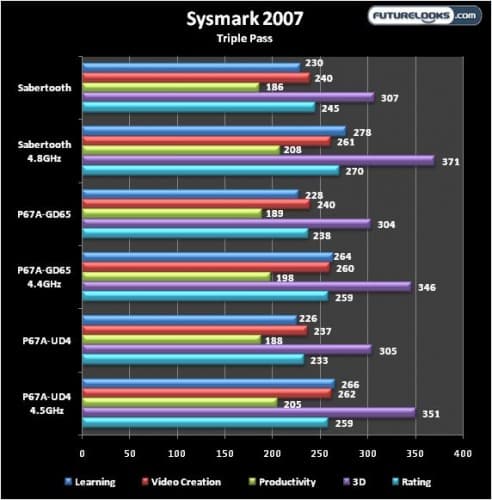 Stock configuration shows both platforms achieving similar scores. But, the slightly more aggressive Sabertooth scores higher throughout the tests when overclocked. We doubt anyone will use an overclocked system for this reason alone. Let’s move on to 3DMark11 and check out 3D performance.