What about performance? Seeing how the specs are virtually identical to that of the Asus Eee PC 1000HE, I expected the Eee PC 1005HA Seashell to offer similar numbers when put through its benchmark paces. 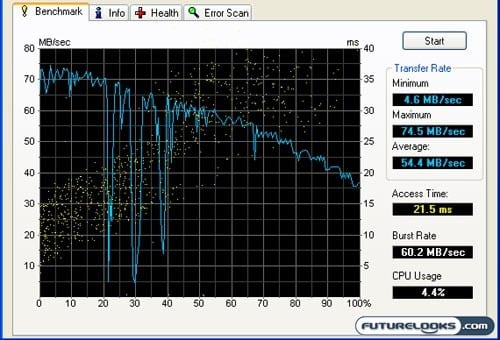 The 160GB hard drive, as far as I can tell, is the same as the one in the 1000HE. Even so, this particular model didn’t seem quite as healthy when it came to consistency. You’ll notice the three major drops in performance, but this could vary on a unit-to-unit basis. That said, the overall average transfer rate (54.4MB/sec) is in line with the 1000HE (52.1MB/sec), though the burst rate (60.2MB/sec) is quite a bit lower (89.9MB/sec).

Interestingly, the results from the PCMark05 and 3DMark06 benchmarks were a little different than expected.

For PCMark, the 1005HA was able to complete every test available to it, coming up with a total score of 1571 PCMarks. That said, the results did not give me individual scores for memory, graphics, or hard drive. I did get a CPU score of 1559 though, which is about the same as the 1000HE.

For 3DMark, the 1005HA Seashell ran into the same snag as most other netbooks I have reviewed, failing to complete the Batch Size Tests. It froze, giving me a black screen. Removing these tests, the benchmark produced an overall score of 122 3DMarks, which is a slight step up from the 90 that the 1000HE was able to produce.

You have a lot of options when it comes to buying a netbook these days. All the major players are getting involved and they all seem to offer similar features at similar price points. You could look to Dell, Acer, HP, Samsung, and so many others. 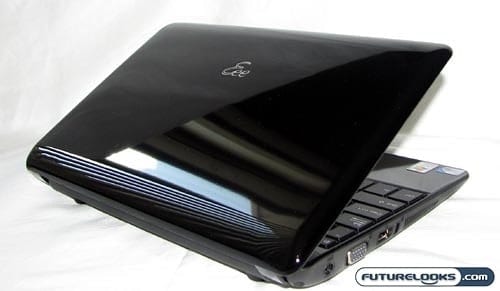 In my experience, Asus has always offered the best build quality in its class and the Asus Eee PC 1005HA Seashell is no exception. Everything is well built and the netbook certainly feels solid for something that costs less than $400. I am glad that I am able to stream live video through Ustream on this, which is usually a good benchmark test to see what a netbook can do. However, this netbook is certainly not without its faults.

The spec sheet has not been improved at all compared to previous iterations, so the performance level is comparable at best. The fantastic chiclet keyboard has been abandoned for some reason and we’re getting a strange bumpy trackpad. I like neither of those changes. Given its MacBook Air-inspired profile, it’s also unfortunate that this Eee isn’t that much thinner than its non-Seashell counterparts.

Don’t get me wrong. The Eee PC is still a pretty decent netbook, but it does not have the same kind of “wow” factor that the 1000HE gave me. We need more power, better specs, and something that really changes the game for that to happen.