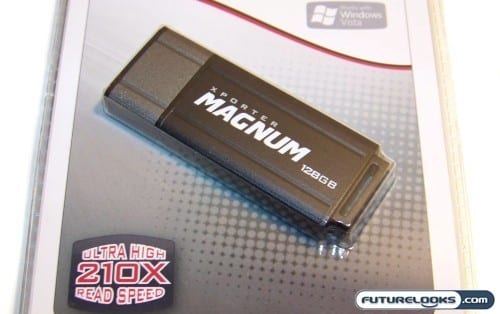 One of the handiest things about today’s tech devices is mobility. We like to take everything with us every where which means everything needs to be smaller and lighter. The same is especially true for devices that need to store data whether it be an MP3 player or hard drive. Unfortunately, hard drives and the external storage cases they require aren’t very small. They weigh a lot for their size and are cumbersome to transport. This is where micro USB storage device technology can come in very handy.

USB pen drives are super small and recently broke the 128GB barrier and can be used for everything including backing up extremely large amounts of data at home or at the office. You no longer need to tote around that external hard drive enclosure or laptop to get to the data. Today we’ll be checking Check out Patriot Memory’s largest capacity 128GB XPorter Magnum USB Pen Drive. 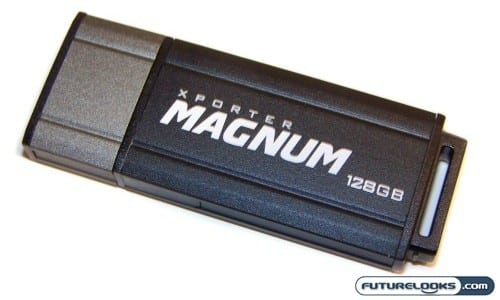 Just from the photo, you can tell the Magnum is about the size of a pack of gum. In this case, it’s an aluminum pack of gum you don’t want to chew. It’s that same casing that makes it super sturdy which will take a serious beating if you’re rough on pen drives.

Measuring 2.5″ x 1″, this thing is tiny compared to any of the USB hard drive units commonly seen on the market. It’s also pretty impressive that it offers a 128GB of storage, yet doesn’t need you to plug int a USB cable to plug it in like most hard drive based units.

If you’re looking for loads of mind boggling technical speak and specs, you’re not going to find any here. This 128GB XPorter Magnum USB pen drive is standard USB 2.0 and 1.1 compatible. It’s Microsoft certified and tuned specifically for Vista. If you plug it in, it should work right from the start once your operating system registers it. However, any OS will recognize this standard USB device.

One of the features is listed on the package as Ultra High 210X Head Speed. What does this mean for performance? The internal memory is probably tuned for faster transfer speeds should future USB performance improve in the future. 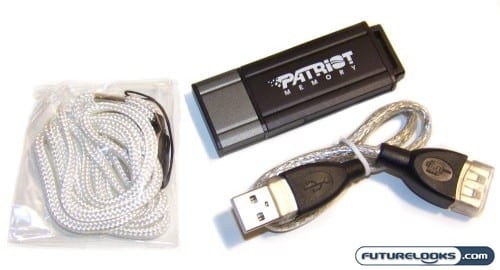 The bundle is yet again pretty simple. Aside from the XPorter Magnum, you get a handy rope lanyard and USB extension cord. The rope will come in handy for carrying around the Magnum your neck so you won’t forget that 128GB of data somewhere stupid. The data you carry on this size USB pen drive is most likely going to be super valuable. The last thing you want to do is lose it.

A USB extension cord might seem useless. Chances are that you’ve needed one before and just never got around to getting one. “Out of sight, out of mind..” is synonymous with pen drives. It’s easy to forget you have the pen drive plugged in to the back of a system. Using that handy little cord brings the pen drive back in to view.

Normally, we’d have a whole section dedicated to installation of tested hardware. But, working with any pen drive should be as simple as plugging it in to your motherboard or front panel USB port. If a pen drive fails to be auto detected by your system, it could be a malfunctioning USB port or operating system. It’s also possible that the front USB ports on yoru case may not be fully USB 2.0 compliant for file large file transfers. It happens.

Using a different port and/or updating the OS driver are the quickest ways to figure it out. As such, a few system specs for you to ponder…

The purpose for the three test systems was to remove any possible variances that might affect the performance of the XPorter Magnum. Keeping USB 2.0 drivers up to date is pretty much left to the operating system itself so there isn’t much we can do about that and Patriot Memory doesn’t offer some souped up driver that we can install for extra performance with their drives.