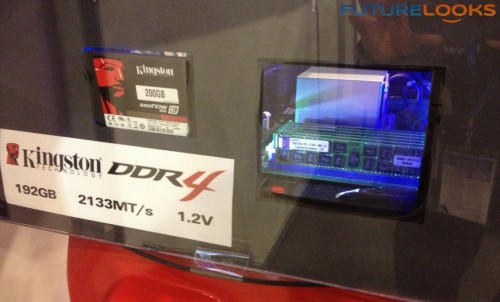 The Intel Developer Forum 2013 (IDF 2013)  is under way in sunny San Francisco. One of the cool things about IDF is that you can often see some glimpses of future developing technology. As desktop components push forward, it was only a matter of time before memory modules take the next step to DDR4. Kingston Technology had a couple of impressive systems on display should make any serious enthusiast drool.

Highlights of what they showed off include new memory modules based on the aforementioned DDR4 technology plus some of the fastest production DDR3 modules you’ll ever see. 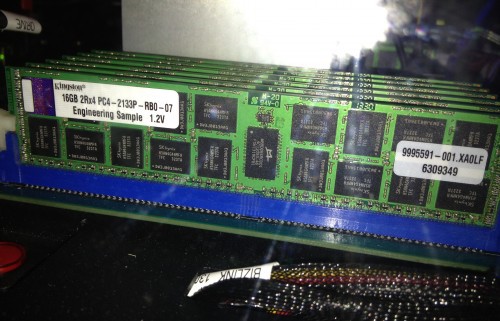 In a Windows 2012 server, Kingston is running 12 x 16GB 2133MHz ECC-DDR4 memory on an Intel reference board that may or may not be announced since INTEL decided to close up shop on its motherboard business. So it’s more likely that we’ll see it as a GIGABYTE or ASUS board in the future.

For those that like to count, yes, that is 192GB of total system memory allowing for a huge allocation of VM clients, or Battlefield 4 servers. Whatever you decide to do with it, you’ll be rewarded with a lower utility bill as the ECC-DDR4 requires only 1.2 volts. Considering that even the best “green” DDR3 modules still require around 1.35 volts, this is a pretty decent drop in consumption.

Overall, this is very impressive and it’s another product that they can boast about as Kingston also sells the fastest 1600MHz ECC-DDR3 modules too.

XMP-Certified DDR3 – Not Done Yet! 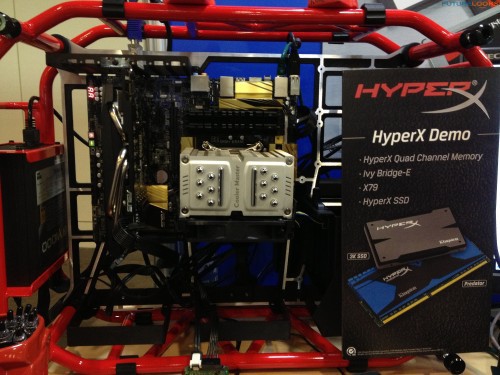 The ASUS X79 Deluxe system (above) in the cool InWin D-Frame enclosure is running a 32GB HyperX Beast DDR3 XMP-Certified memory kit at 2800MHz. The motherboard and new Haswell Ivy Bridge-Extreme can handle it thanks to the much improved integrated memory controller. It seems that DDR3 is going to stick around for a while longer but even if it goes in the next year or so, it looks to be going out on top.

Even notebooks are seeing benefits from the final speed bumps in DDR3 and the increased memory performance of Haswell. The MSI laptop above has 2133MHz SO-DIMM DDR3 memory running perfectly. That’s the fastest laptop DDR3 ever manufactured and makes even the impressive Kingston HyperX PnP 1866MHz kits look like they are moving backwards.

Each of the systems are connected to an Avoton “micro” server which has four nodes installed running 16GB of ECC SO-DIMM (laptop) memory modules. The Avoton is connected to the other systems running a web server and monitor sporting a Space Invaders theme. It’s nice little GUI for monitoring server activity in a fun way.

There’s no pricing information just yet on any of the memory kits that were shown off. But we’re sure that information will undoubtedly go out to all corners of the world when a release date is selected.

As for the E100 series (enterprise) SSDs in the photos, those are already available at the usual enterprise premium. However, a more affordable E50 3K NAND SSD was recently announced. Kingston does their homework with extra credit, so we have no doubt the new E series will also measure up. We’ll be taking a look at a couple really soon so stay tuned for that review and maybe some more important bites from IDF 2013.