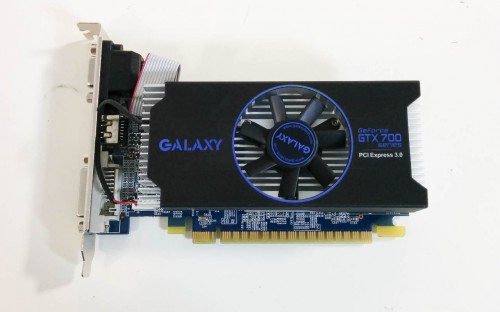 With the introduction of NVIDIA’s new Maxwell GPU, better known as the GTX 750 and GTX 750 Ti, the performance per watt battle has never been more fierce. Not only has NVIDIA brought competent 1080p gaming to the sub $160 US price point, but they’ve also done it without additional power. In fact, the new Maxwell GPU uses only 60 watts of power, yet out-performs the original flagship GTX 480, which is a GPU not known for its low temps and low power consumption. Galaxy has found a unique way to capitalize on this new GPU with two new “Slim Editions”, which we’d more accurately call them “low profile”.

Unlike their previously released GTX 750 series cards,these new GTX 750 GC (as shown) and GTX 750 Ti Slim Edition GPUs bring the power of Maxwell, to an entirely different market segment of users that want to maintain a compact system without sacrifice in graphics performance. Galaxy is the very first company (that we’ve seen) to put out low profile versions of their GTX 750 series products. This is entirely possible thanks to the low power consumption and the fact that no additional 6 or 8 pin PCI-E power connectors are required. They are also extremely short, making it a perfect fit with many of today’s small form factor systems, using a mini-ITX board.

Although it is not as wide as many dual slot GPUs, it is still more “low profile” than it is “slim”. It will still stick out enough to block an adjacent slot, which may hinder its ability to fit into some extremely low profile 1U cases. It’s best to find a case that has at least two slots if you want to make sure it fits. There are currently no plans for a single slot solution.

The GTX 750 GC edition with 1GB of GDDR5 will retail for $129.99 US while the GTX 750 Ti GC with 2GBs of GDDR5 will retail for $159.99 US. They are both available on Galaxy’s own web store, with a bonus offer of a low profile bracket. I still feel that it should come with one given that they are “low profile” GPUs. Without it, they inhabit the same space as their “high profile” brethren.

Futurelooks is working on a system build guide that incorporates this GPU, and the smallest case we can fit it in, so stay tuned for that!

Mar. 10th, 2014 – Galaxy Microsystems, a leading manufacturer and innovator of GeForce graphics cards, announced today the Galaxy GeForce GTX 750 GC Slim 1GB and GTX 750 Ti GC Slim 2GB.  The new Slim edition cards are factory overclocked and performance enhanced similar to their dual fan counterparts, but feature a miniaturized design with a host of optimizations for compact machines.  The new 6-layer Galaxy PCB is over 60% smaller and requires no auxiliary power connectors, making the Slim versions the perfect cards for machines with limited space and low wattage power supplies, such as Mini-ITX systems and HTPCs.

The specially designed cooler, which is astonishingly quiet under load and almost totally inaudible at idle, maintains the half-height form factor which allows compatibility with low profile brackets, available for sale separately.  A flexible array of display outputs allow users to connect up to three displays for Surround gaming, and both cards feature the most exciting new NVIDIA exclusive technologies including G-Sync, ShadowPlay, and SHIELD PC Streaming.

About Galaxy Microsystems, Ltd.
Founded in 1994, Galaxy has grown exponentially in Hong Kong, Southeast Asia, China and Europe. After years of private labeling for many tier one brands in the US; in 2007 Galaxy entered the US etail and channel market. As consumer demand increased Galaxy entered the retail space in 2009 to help further distribute their aggressively priced high quality cards. Galaxy offers toll free 24/7 US tech support and 3 year extended warranty. For further information about Galaxy, visit http://www.galaxytechus.com

NVIDIA, the NVIDIA logo, GeForce, GPU Boost, PhysX, G-Sync, ShadowPlay, SHIELD, CUDA, and NVIDIA 3D Vision are trademarks and/or registered trademarks of NVIDIA Corporation in the United States and other countries. All rights reserved.  All other trademarks and trade names are the properties of their respective owners.
[/hide-this-part]