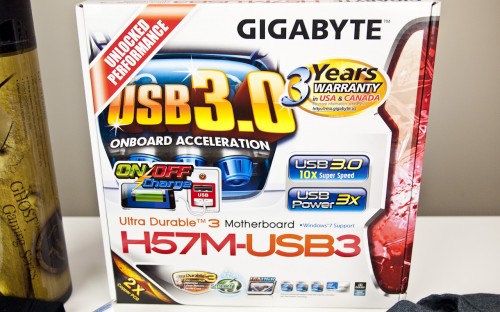 CONTEST CLOSED – Thank you fro the outstanding participation and spirit! We’re busy verifying the entries and will let you know ASAP if we made our goal so we can draw for the G1-Killer Sniper! Keep an eye on our Facebook and Twitter for the announcement. We’ll update here afterwards.

In our last draw we gave away a couple of cool things from Thermaltake. Before that, we gave away a selection of T-Shirts, a copy of Deus Ex, and a some goodies from NZXT. But like all good things, our Virtual PAX Prime Giveaway spree must come to an end. So today’s edition, sponsored by GIGABYTE, is the end of the line for this round of free stuff from one of the biggest community and fan inspired gaming events in North America.

GIGABYTE is a company that is very supportive of gaming. They put on a cross country tour of Canada, bringing their G1.Killer Motherboards to the hungry gaming masses, with their final stop in Vancouver at the Memory Express Duke Nukem LAN Party. And of course, let’s not forget their support of LANcouver 2011 and the G1-Killer Endurance Challenge. Though GIGABYTE was not officially at PAX Prime 2011 this year, their gaming spirit lived on in systems sported by many companies at PAX Prime 2011 this year. Yes, we procured some products for you to try to win in our fifth and final draw. How about some hardware?

A Bundle of GIGABYTE Goodness… 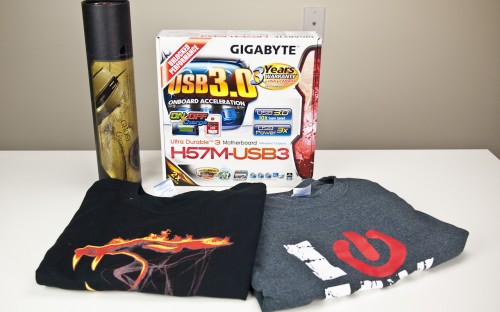 Even though GIGABYTE wasn’t at PAX Prime 2011 in full force, they did have some things stashed that we were able to procure for our readers. Our fifth and final prize bundle contains the following goodies…

While not the most hardcore gaming board on the planet, because they make that too, the GIGABYTE H57M-USB3 makes an excellent home theatre PC foundation while the massive GIGABYTE Ghost Series Mousing Surface should help you get your frag on with ease. We’re also adding in a couple of nice T-shirts from iBuyPower and Kingston HyperX for a wardrobe change between marathon gaming sessions. But we know that you guys love to compete for bigger and better prizes, so we pushed GIGABYTE for one of these…

A GIGABYTE G1.Killer Power Up Standing By! 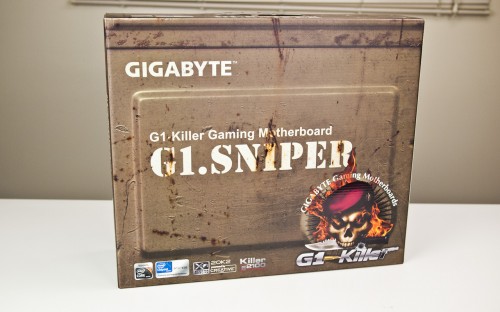 Since Futurelooks readers are the best in the land, we made GIGABYTE commit to giving away one of these bad boys: A G1-Killer Sniper Motherboard worth $349 US! They are willing to upgrade the H57M-USB3 if Futurelooks readers can come up with at least 100 entries by 100 people by Thursday, September 8th, 2011 Midnight (PST). Can we do it? Can we make GIGABYTE upgrade our HTPC board into full blown G1.Killer Sniper Gaming goodness? I think you can!

How Do I Enter and Tell Others So We Can Upgrade that Board to G1-Killer Status?

Ai Ya! Futurelooks has done it again! They asked GIGABYTE to fulfill our wildest gaming dreams in their latest #PAXPrime inspired giveaway!  – http://wp.me/prfPe-6B7

3. Post the link to your status update to the comments below so that we know you’re in and want to win. For those of you that don’t know how to find that link, it’s the time stamp that sits beside the “Share” link below your wall post. It’ll say something like “X hours/mins ago”. That’s the link we want to see. Please note that we are moderating the comments so if you don’t see your entry show up right away, just give us a chance to approve it.

Now in order to get enough people entering the contest, we’re going to need to tell everyone. So here are a couple more ways to earn yourselves an extra ballot or two…

BONUS ENTRY # 1 – If you have a twitter account, tweet the contest off to your followers. Let them know that we need their help to activate the G1.Killer Power Up provided by GIGABYTE and include a link to this contest and both @GIGABYTE_USA and @FUTURELOOKS in your tweet. If you want to make sure that we see the tweet, you can post the tweet itself in your entry below as sometimes pingbacks and @replies don’t work right. Make sure we have your Twitter profile link too so we know it belongs to you.

BONUS ENTRY #2 – Provide GIGABYTE with a single suggestion on how they can make their gaming motherboards even better. You’re welcome to give them as many suggestions as you want, but one will do for the purpose of this contest and for picking up a second potential entry into this contest.

If you decide to take advantage of any of the bonus entries later, just reply to your original entry with your tweet and or your suggestion for GIGABYTE. This keeps each entry nice and clean and will prevent us from missing your entry. One entry per person from each of the entry methods. Duplicates will be ignored.

In total, you can get yourself up to THREE chances to win the prize bundle. And if  you can help this contest reach its close of at least 100 valid entries by at least 100 people by the contest close, someone will go home with one bad ass G1.Killer Sniper Gaming motherboard courtesy of GIGABYTE.

If in the event that you should win the draw, make sure you use a valid email address when you create your comment with your entry. It makes it much  easier to notify you that you’ve won something awesome if we can contact you. It would suck if we had to redraw your name and give your prize to someone else within 48 hrs of announcing the winner.

We’re opening up this contest to anyone in North America. That means US or Canada. Yes, we’ll break the rules and even allow Quebecers to enter. We’ll waive the skill testing question requirement for Canadians if you can get all the steps to right. Yes, you may have your prize shipped to any US or Canadian address if you currently reside outside of North America.

Whether we make our goal of 100 entries by 100 people or not, the contest will end on Thursday, September 8th, 2011 at Midnight (PST). Let’s hope that we’ll all be celebrating that 100th entry and an opportunity for one of Futurelooks’ very own readers, to snag a G1-Killer Sniper Motherboard. We would LOVE to see that happen!

If you have questions, please post them on the Facebook Update to this contest. This keeps all the entries below clean and uncluttered. It also keeps us in compliance with that weird Terms of Service condition on Facebook that keeps us from using them to collect entries. We can’t have Zuckerberg shutting down the party now can we? We’ll draw all the prize winners at the conclusion of the last round of giveaways so make sure you give us a few days to get that sorted out. We’ll announce them ASAP so people can enjoy their goodies right away. Especially if that G1.Killer Sniper board gets unlocked!