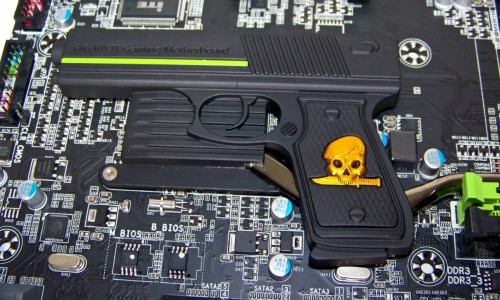 It’s been called the best looking gamer motherboard series since modding a PC became an in thing. GIGABYTE G1.Killer series has a tight hold on this market segment and doesn’t show any signs of loosening up on the rope. There are plenty of gamers thoroughly enamoured by the fine gaming features of the series such as Super Sight, Super Hearing and Super Speed. Today, we take another look at their latest Assassin 2 with its Super Shield theme featuring the new Intel X79 chipset. It’s similar to the original Assassin but with a few more updated bells and whistles. It’s time to take out those elite MSI video cards and Kingston HyperX quad channel DDR3 memory for some testing!

The Assassin 2 gets a boost in the PCI Express bandwidth and offers quad-channel memory support as per the features in the new INTEL X79 Platform. That means, instead of running triple channel DDR3, we’re now able to utilize quad channel DDR3 and access four memory modules at once. If you missed our Intel Sandy Bridge-E and X79 launch article, the chipset specifics are there. To put it all into perspective, we’ve got one of our full video overviews below…

So overall, there’s a few things new, and a few things the same when compared to the original G1.Killer Assassin. The biggest change is of course the downsizing from XL-ATX to a regular ATX form factor. This will allow the new Assassin 2 to fit in more cases than the original. Now we’ll go into a bit more detail about what those buzz words from GIGABYTE mean. 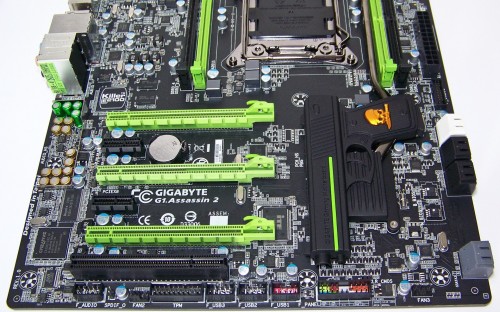 Super Sight is simply the platform’s 3-way NVIDIA SLI and AMD CrossfireX PCI Express 3.0 support. Pile up to three elite PCIE 2.0 or 3.0 video cards when they become available. Naturally, PCIE 3.0 means there is plenty of bandwidth available even more so than X58 offered. Pack this board as you see fit.

Super Hearing is of course the integrated Creative Labs X-Fi 20K2 audio processor. It’s arguably the best bang for buck gaming audio processor that supports EAX and all manner of high definition audio up to 7.1 channel. Nichicon processors ensure there’s plenty of clean power to create crystal clear frequencies via the integrated audio amplifiers. There’s an Entertainment, Audio Creation and Game mode built in to the Creative software. Game, DJ or get your game groove on as needed.

Super Speed imbues the motherboard with a Killer E2100 (embedded or integrated) network processor. The E2100 eliminates the Windows network stack cutting back latencies and offers full gaming network data control. Prioritize your games or supporting programs to get the most bandwidth if needed. Block out the others that leech off your connection.

Super Shield is their grand weaponized theme. Naturally, the X79 platform utilizes a lot more low profile components thus there’s less need for big heat sinks. That has helped cut back on costs. Still, you get the green on black theme along with a scope and hand gun heat sink. It’s a gamer board, so it has to pimp accordingly.

That’s it! Training over. Let’s get to the good stuff like the test system, overclocking and benchmarks!

We’ve already established a good performance base line in our Core i7-3960X Sandy Bridge-E and X79 motherboard launch article. Here is the test system to beat.

Some BIOS settings can influence the overall results. Thus, features like Turbo, memory frequencies and timings were checked to make sure they match. Thermal throttling was also disabled to make sure it doesn’t automatically scale back during testing. Keep in mind that some motherboards use a more aggressive BIOS that we do keep an eye out for when testing. We don’t want to rob a platform of its full stock potential. However, both our boards here share similar BIOS tuning.

UPDATE: GIGABYTE has informed us that a new BIOS was released to address overheating issues created by the original BIOS. The new BIOS that corrects the issues is called F7. You can find out more about this update right here. It is a critical update so we recommend that you update your board before driving it to the outer edges of overclocking. 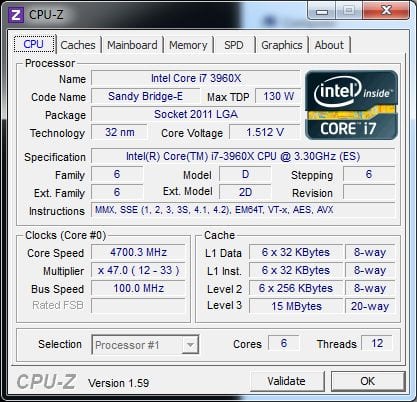 Sandy Bridge-E LGA2011 is a little different than regular Sandy Bridge LGA1155. You can tweak the BClock and Base Clock Gear Ratio to squeeze out more frequency while keeping the PCIE locked. Using a 1.5 CPU VCore and other minor tuning, I was able to get the system to 4.7GHz stable. I could almost get 4.8GHz perfectly stable but just couldn’t seem to find the right settings. Your results may vary with more patience and perhaps a more willing CPU. This brings us to the BIOS commentary. 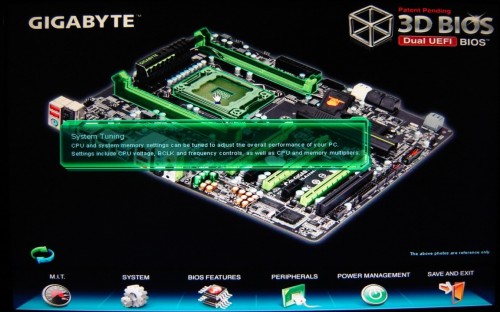 Working within the Assassin 2 F5 BIOS was a bit cumbersome. The mouse and keyboard interface is sluggish which is evident while observing the mouse cursor, making it hard to find the target line. There was also some slow 3-10 second setting access times when double clicking or hitting enter when selecting settings in the MIT page. I often thought the BIOS had locked up or was having trouble. No one likes a “laggy” interface. Especially in a traditionally quick area like a BIOS.

There are some important settings that simply don’t have any notes in the information bar on the right. Since MIT settings are quite important to enthusiasts, there should be more information to make it more easy to understand. Granted, there is also the manual but one positive aspect of the UEFI BIOS is to offer a more intuitive and informative interface. Hopefully, a new BIOS concentrating on the software aspects speeds things up soon.