PCMark7 utilizes 7 different productive benchmarks to get an overall system score. It breaks them down individually as well. Trial demos give you just an overall score, but it’s good enough for comparison. 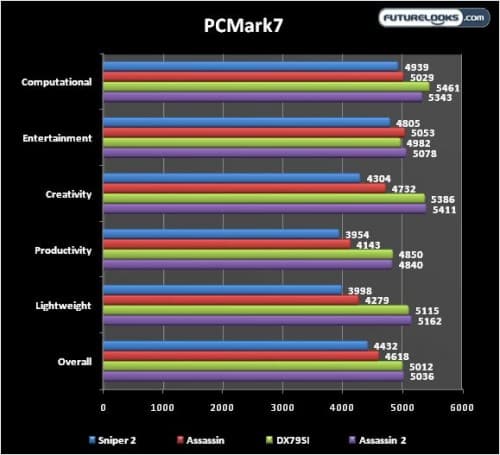 It was all pretty uneventful when staring at the benchmark in progress. However, you can see the performance differences between all of the platforms. While I’m not exactly sure why, the DX79SI lead the computational and productivity benchmark. Otherwise, the Assassin 2 scored the overall best by just 24 points. We know Intel makes fantastic motherboards and seeing the Assassin 2 just edging past is a testament to its quality as well.

I used performance settings so that you can give the trial download a run in case you wanted to compare your results. You’ll get an idea of where your system’s current graphics capabilities are on the food chain. 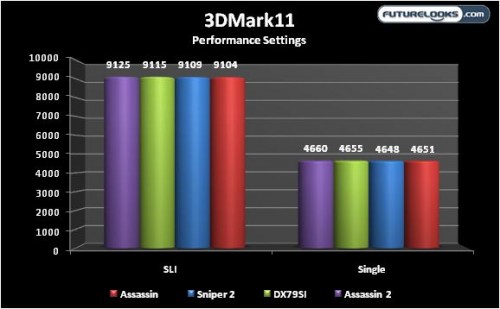 Scores are very close when you consider all the PCIE tuning and implementation. Still, the updated X79s were only separated by about 10 points at the most on the average. The MSI GTX 560 Ti Hawk really make the scores look good too! 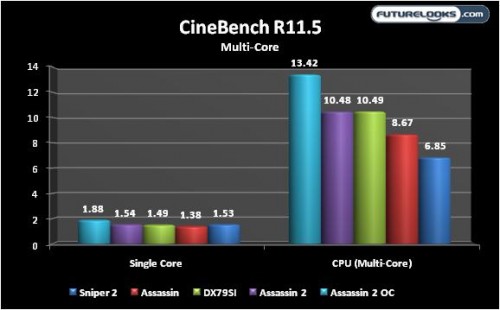 It’s nice to see that both the nicely tuned DX79SI and Assassin 2 are close when it comes to multi-core testing. The surprise here is the single core score where it is noticeably quicker than the SI. BIOS tuning typically has a lot to do with this.

This benchmark software can actually reveal some of the refinements that we can’t visibly see when it comes to CPU tuning. A platform’s fine CPU tuning heavily influence the scores. CPU thermal monitoring was disabled as well. Let’s see how it does against the DX79SI and previous Assassin. 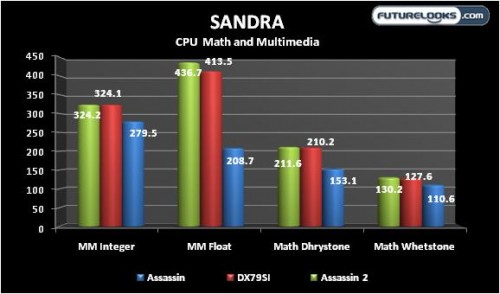 The Sandy Bridge-E multimedia (MM) trend continues with the scores about double what the Gulftown/Assassin combo offers in that respect. Otherwise, it’s a little closer through the rest. Overall, the Assassin 2 slightly outpaces the DX79SI which is good to see.

This is one of my favorite free to download and use 3D benchmarks as it can test your system’s graphics in DX9, DX10 and DX11 and give you an average frame rate performance. It’ll also give you an overall combined rendering score as well. 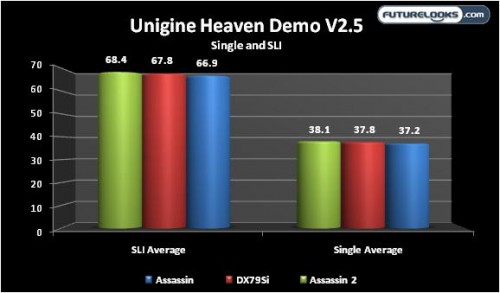 Single graphics scoring is quite close. However, the PCIE improvements are again evident with the Assassin 2, scoring slightly higher. Keep in mind these scores are with killer DX11 settings. Stock Unigine scores will actually be quite a bit higher.

Metro 2033 is one of the toughest DirectX11 games for any gaming system to handle. It’ll bring just about every current NVIDIA and AMD video card to its knees especially at 1080p or higher resolutions. 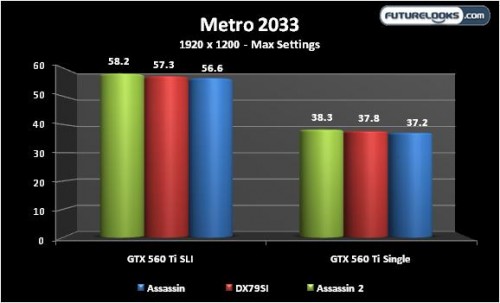 What this tells us is that tuning again favors the X79 duo. The Assassin 2 is a couple frames faster if that. However, the X58 Assassin isn’t far enough behind to cause anyone to run out and upgrade for gaming. If you’re sitting on that board for gaming like I am, it’s perfectly fine.

I’m tossing in one last DX9 video game just in case you are or plan to use a similar elite gaming system. There are plenty of these games still online and this highly detailed DX9 game is the standard. These are SLI scores as well. 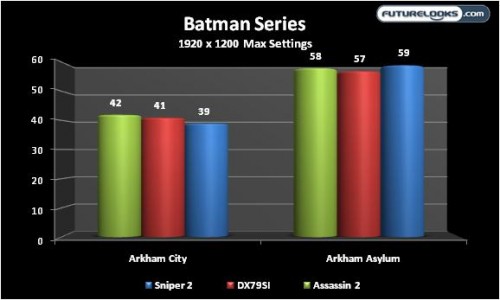 Maximum game settings on any 1920 x 1200 monitor can make video cards crawl. AA is very smooth on all three boards. After averaging up the frames, the Sniper 2 seemed slightly more eager benchmarking AA. However, it seems that the bandwidth hungry Arkham City favored the Assassin 2.

Now that the software performance is covered, let’s check out how the hardware stands up to scrutiny and take it home!